Just a Thought...
The MSM Lies Again
By: Diane Sori / The Patriot Factor 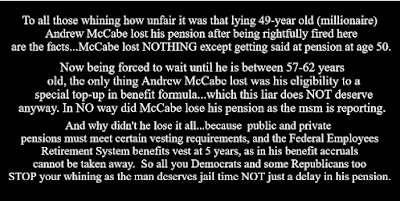 The commander in chief took to twitter to warn of "tremendous" corruption in the FBI, Justice department, and state department.

A prominent Iraqi Shiite interfaith activist told BBC Arabic earlier this month that the Islamic State terror group’s violence, including beheadings, is “deeply rooted in Islam,” which makes it “a hundred times more evil.” Jawad Al-Khoei also said that Christians were “the owners of this land, and the Muslims came here as their guests. Al-Khoei […]
Read in browser »

This reminds me of “The Godfather” — John Brennan was President Obama’s Luca Brasi, one of his most trusted enforcers. “Able to handle himself in any fight, he had a dark reputation among the underworld as a savage killer.”

The depraved and the immoral claim the moral high ground.


Samantha Power issued a veiled threat at President Trump after former FBI deputy director Andrew McCabe was fired: “Not A Good Idea To Piss Off John Brennan.”
These criminals actively and illegally conspired to steal the 2016 election.

Seeking to retain his position as CIA director under Hillary, Brennan teamed up with British spies and Estonian spies to cripple Trump’s candidacy. He used their phony intelligence as a pretext for a multi-agency investigation into Trump, which led the FBI to probe a computer server connected to Trump Tower and gave cover to [then-National Security Advisor] Susan Rice, among other Hillary supporters, to spy on Trump and his people. (more here)

Read entire article here: https://gellerreport.com/2018/03/brennan-powers-threaten.html/
Posted by Diane Sori at 10:04 AM No comments: