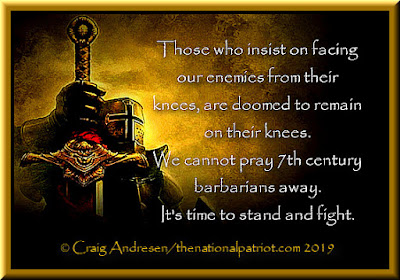 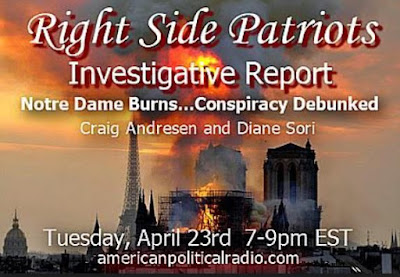 *The opinions and conclusions expressed within are ours alone.

“Paris is beheaded,” so said Pierre-Eric Trimovillas as he watched the spire come crashing down, and yet the white cross remained unscathed...a beacon of hope against the cathedral's ruins...God's hand perhaps.

And so it stood the test of time and bore witness to some of history's most monumental moments. Joan of Arc was beatified there; French kings were crowned within its majestic hall; Napoleon declared himself emperor there in 1804; the French revolution did it little harm; and neither World War I nor World War II would see to its demise. It was restored, renovated, and repaired over the centuries many times over as one would expect a now 850-year old building to be, and done so with little to no problems arising.

Read entire article and see videos and close-up photographs here: https://thepatriotfactor.blogspot.com/2019/04/investigative-report-notre-dame-burns.html
Posted by Diane Sori at 7:40 AM No comments:

Source: Photo by Evan Agostini/Invision/AP
Former Democratic presidential nominee Hillary Clinton used a strange new term on Sunday to address the tragic bombings on hotels and churches in Sri Lanka. In a tweet sharing her condolences, Clinton regretted that "Easter worshippers" had been targeted in the attacks.

On this holy weekend for many faiths, we must stand united against hatred and violence. I'm praying for everyone affected by today's horrific attacks on Easter worshippers and travelers in Sri Lanka.
— Hillary Clinton (@HillaryClinton) April 21, 2019

Email ThisBlogThis!Share to TwitterShare to FacebookShare to Pinterest
Robert Spencer in FrontPage: The Sri Lanka Jihad Massacre and the Decline of the West

How many times is the charade of denial going to play out? (Note that this article was written before the BBC carried a report saying that Sri Lankan authorities were identifying the attackers as part of a “radical Islamist extremist group.”) My latest in FrontPage: Well over two hundred people are dead, and hundreds more […]
Read in browser »

Our brave boys are dead while this lowlife dances on their graves in Congress. First she sanctions 9/11 jihad, now this. Imagine, Pelosi appointed this jihadi to the Foreign Affairs Committee.

The United States Army was the villain in the “Black Hawk Down” incident in Somalia, U.S. Rep. Ilhan Omar, D-Minn., wrote in a 2017 Twitter post.


Read entire article here: https://gellerreport.com/2019/04/omar-attacks-us-soldeirs-black-hawk.html/
Posted by Diane Sori at 7:02 AM No comments: