Op-ed:
Arrested for Committing Hate Speech Against Himself
By: Diane Sori / The Patriot Factor 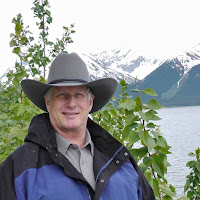 This past Saturday an American Patriot...my friend Bill Finlay...aka Wild Bill for America...was arrested in Calgary, Alberta, Canada for 'supposed' hate speech on his iPad. Bill was an invited guest asked to speak at the Worldwide Coalition Against Islam. 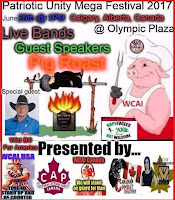 It all started with this comment and poster he put on his facebook page: "Heading out to Calgary, Alberta, Canada to speak at the Worldwide Coalition Against Islam! Have info that the govt is busing in agitators to make things difficult for us. So please put me and the others on your prayer lists as we take a stand against the most dangerous false religion on earth......and the flaming liberals who love it."

When I heard from Bill a few hours after his arrest at the Calgary airport this is what he told me, "Canada just decided to kick me out so I'm on my way home but it's not over yet. In addition to the unlawful detention, they seized my laptop to send to Ottawa for a 'forensic investigation,' they are determined to get me on something. Plus they are bringing in their tax authority to determine the tariff to slap on the smuggled contraband (my personal notes to myself on Islam's abuse of women and children). And my speech was about the importance of open and honest discussion without fear of the government dragging us away."

And then in typical Wild Bill humorous fashion Bill said to me that "the notes written to myself that no one could see means I must have committed a hate crime against myself!" All I could say at that point was that Canada has some serious issues...guess Prime Minister Trudeau is an Angela Merkel clone.

Here now is the very speech Wild Bill was to give in Canada...a speech he gave a few weeks ago in Jacksonville, FL. The cops after confiscating his iPad having read the script immediately arrested him for hate speech. Watch the video and you decide if this is hate speech...I sure do NOT think it is...I think it is truth...a truth that must be told:.https://www.youtube.com/watch?v=sZUmYQYDaw8&feature=youtu.be


Seriously folks...what happened to Bill in Canada can (and sadly most likely will) happen here in our own country if we do NOT put an end to this political correctness nonsense concerning a certain group of people...as in muslims...and their liberal Democrat kumbaya protectors...all of whom do not like us very much.

Thankfully, Bill is now safely home in Florida and is OK...mad but OK...and last night "foreign national" Bill put up this video on his facebook page where in his own words he tells his story of Canadian border police out of control: https://www.youtube.com/watch?v=TwaMpTLUmX0&feature=youtu.be

I spoke to Bill by phone last night and he will be on Craig and my RIGHT SIDE PATRIOTS radio show on American Political Radio this Friday, June 30th from 7 to 9pm EST to tell his story and hopefully wake some people up to the dangers 'We the People' face regarding our First Amendment rights and freedoms.

Hope you can tune in at: https://tunein.americanpoliticalradio.com/platinum-plus-player/ because this is one show you do not want to miss. Remember, what happened to Bill in Canada can happen to any one of us...as political correctness and the stifling of free speech, if not stopped, will indeed be the death of us all.

Tax season may be over, but next year’s taxes will be due before we know it—and at least 1.4 million Americans won’t know that their Social Security numbers are being used by illegal aliens. An Internal Revenue Service report that this is roughly the number of illegal aliens who are impersonating citizens when it comes to file taxes. To make things more maddening, they’re not allowed to work with the Department of Homeland Security on finding the identities of these people. Stephen Dinan at The Washington Times had more:


Most illegal immigrants who pay taxes have stolen someone else’s legal identity, and the IRS doesn’t do a very good job of letting those American citizens and legal immigrants know they’re being impersonated, the tax agency’s inspector general said in a new report released Thursday.
[…]
“Cases of employment identity theft can cause significant burden to innocent taxpayers, including the incorrect computation of taxes based on income that does not belong to them,” said J. Russell George, the inspector general.

It’s long been a conundrum in the federal government.

HALAL CERTIFICATION – The Unpalatable Facts from Q Society of Australia Inc on Vimeo. The Q Society of Australia, the admirable Australian group of which I am Vice President for Islamic Scripture and Ideology, has just released a new documentary looking into halal certification schemes. Entitled HALAL CERTIFICATION – The Unpalatable Facts, the new production […]

Posted by Diane Sori at 9:40 AM No comments:

More of the poison fruit of Obama’s sanction and support of the Islamic Republic of Iran. President Obama fought tooth and nail for this evil regime. Obama’s legacy is his nuclear pact with the world’s leading state sponsor of terror.

President Obama delivered wooden pallets of cash to the mullahs. Where is the Senate hearings on that? Where is the special prosecutor from the illegal payoff to terrorist actors?

Iran, under Islamic law, is viciously antisemitic, which is a religious imperative under Islam. Perhaps that was what Obama found the most compelling. His hatred of the Jewish state is well documented.

The enormous sums of American taxpayer dollars transferred to the world’s largest state sponsor of terror is treasonous and unconscionable. The hell that President Obama’s feckless submission to Iran will unleash in the coming years will turn history on its ear. While Obama attempts to burnish his catastrophic legacy, the fall-out from his treachery is going to blow up the world.

Posted by Diane Sori at 9:26 AM No comments:

Ramadan wasn’t recognized in the White House with an iftar or Eid celebration for the first time in nearly two decades, The Washington Post reports.
A holy month of fasting between dawn and dusk, prayer and introspection for Muslims, Ramadan was observed from May 26 through June 24 this year. Muslims break their daily fast by sharing meals with family and friends before dawn and after sunset, referred to as iftar, and the end of Ramadan is celebrated with a three-day festival known as Eid al-Fitr, one of Islam’s major holidays.

“Muslims in the United States joined those around the world during the holy month of Ramadan to focus on acts of faith and charity,” a statement from the White House read. “Now, as they commemorate Eid with family and friends, they carry on the tradition of helping neighbors and breaking bread with people from all walks of life. During this holiday, we are reminded of the importance of mercy, compassion, and goodwill. With Muslims around the world, the United States renews our commitment to honor these values. Eid Mubarak."

President Thomas Jefferson started the tradition in 1805 when a Tunisian envoy to the United States, Sidi Soliman Mellimelli, was in the U.S. during America’s conflict with the Barbary States. Mellimelli was observing Ramadan and Jefferson invited guests to join him for a dinner served at sunset. Bill Clinton, George W. Bush and Barack Obama had also recognized Ramadan.
Posted by Diane Sori at 9:11 AM No comments: