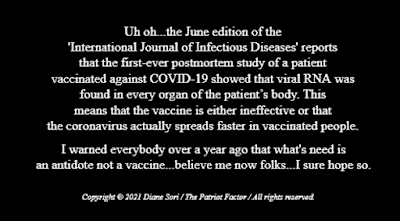 Posted by Diane Sori at 1:35 PM No comments:

Email ThisBlogThis!Share to TwitterShare to FacebookShare to Pinterest
Labels: antidote, COVID-19, ineffective, International Journal of Infectious Diseases, postmortem, RNA, vaccine
Op-ed:
Why No Jab For Me
By: Diane Sori / The Patriot Factor / Right Side Patriots / Right Side Patriots Radio

...And while I am no doctor nor do I pretend to be one, let me start by playing doctor just for a bit because sometimes having even a little learned medical knowledge does prove more beneficial to oneself and one's health than listening to Dr. Fauci spew medical lies about a vaccine not truly proven to be safe nor even proven to be what's truly needed.
So let's start with the fact that “the jab” does not...I repeat not...have full FDA approval regarding effectiveness nor safety as all three currently in use Covid vaccines...the Pfizer, Johnson and Johnson, and Moderna vaccines... were only given what's called “limited use approval,” meaning for “emergency use authorization.”...
Read entire article here: https://thepatriotfactor.blogspot.com/2021/06/op-ed-why-no-jab-for-me-by-diane-sori.html
Posted by Diane Sori at 8:42 AM No comments:

The Biden administration on Tuesday unveiled its national strategy for countering domestic terrorism, with officials telling Fox News it's designed to cut across the political spectrum, while warning that White supremacy and "militia violent extremists" currently present the "most persistent and lethal threats."

The White House National Security Council released its strategy after the intelligence community, back in March, released its comprehensive threat assessment, which found that domestic violent extremism posed a "heightened threat" in 2021, and after President Biden, in January, tasked his administration with the review.

"This National Strategy for Countering Domestic Terrorism lays out a comprehensive approach to addressing the threat while safeguarding bedrock American civil rights and civil liberties—values that make us who we are as a nation," Biden said, adding, "we cannot ignore this threat or wish it away."

Email ThisBlogThis!Share to TwitterShare to FacebookShare to Pinterest
When a North Korean Defector Torches the 'Woke' Schools, You Know Things Have Gone Off the Rails
Matt Vespa / Townhall Tipsheet

North Korea is full of insane people. There are countless news segments where you see the brainwashed masses acting like any other populace would if they thought their leader could read their minds. Everything is warped there. There is a museum devoted to American war atrocities that occurred during the Korean War. It’s an impressive exercise in propaganda. So, when a defector from this communist hell hole torches the "woke" Left and says their shenanigans on college campuses is crazier than anything she experienced in North Korea, you know it's awful (via Fox News):

As American educational institutions continue to be called into question, a North Korean defector fears the United States' future "is as bleak as North Korea" after she attended one of the country's most prestigious universities.

Today, Tuesday, June 15th, from 7 to 9pm EST, RIGHT SIDE PATRIOTS Craig Andresen and Diane Sori discuss 'Why No Jab For Me'; 'Wokeism - Dividing America'; and important news of the day.