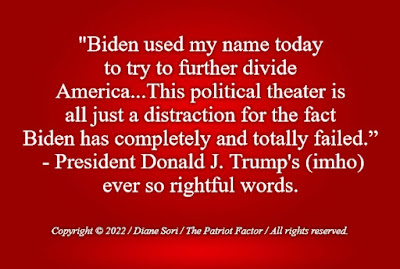 Former President Donald Trump responded to President Biden's sharp criticism in a Jan. 6 speech, saying his Democratic successor is trying to distract from his record.

Biden "used my name today to try to further divide America," Trump said in a statement. "This political theater is all just a distraction for the fact Biden has completely and totally failed."

"Our Country no longer has Borders, has totally and completely lost control of Covid (record numbers!), is no longer Energy Independent, Inflation is rampant, our Military is in chaos, and our exit, or surrender, from Afghanistan was perhaps the most embarrassing day in the long and distinguished history of the United States—and so much more," Trump continued.

Sen. Joe Manchin (D-WV) has been the one to pretty much deliver the bad news to Democrats concerning their plan to nuke the filibuster. He’s already seen as public enemy number one on Build Back Better after he went on national television to announce he’s killing it because it’s an expensive communist venture. It’s a 50-50 Senate. I don’t get what Chuck is trying to do here. Is it to ward off a potential primary challenge from Alexandria Ocasio-Cortez? Maybe—but she’ll be coming after you no matter what, Chuck. That’s her character. Period. You could pass Build Back Better-plus, and she would still primary you if that was her plan. Yet, Sen. Krysten Sinema is the other party in this ongoing drama among Senate Democrats. They can’t afford to lose one vote. They always end up losing two—these two specifically. And like Manchin, Sinema isn’t keen at all about             nuking the filibuster (via Axios):

Voting rights: Schumer says the Senate will vote on a package of Senate rules changes by Jan. 17 — less than two weeks away.

The moderate Democrat from western Pennsylvania who’s running in a very competitive Senate primary for the Keystone State’s GOP-held open seat is vowing to vote to scrap the Senate’s legislative filibuster if he’s elected.

“I will vote to end the filibuster. Republicans are abusing it to block voting rights & endanger our democracy. To block health care & child care & union protections,” the U.S. Marine veteran, former assistant U.S. attorney, and two-term congressman argued this week on Twitter. “We have to win this Senate seat to end the filibuster. I can win & help get it done. It’s that simple.”

Posted by Diane Sori at 7:54 AM No comments: