Tomorrow, Wednesday, May 20th, on RIGHT SIDE PATRIOTS on CPR Worldwide Media from 2 to 4pm EST, Craig and Diane will host a special show on the upcoming SCOTUS decision on same-sex marriage. Joining us will be Wild Bill for America and Billy Spurgeon and we will discuss the legal and the religious arguments both pro and con on this hot-button issue. This is one show you do NOT want to miss. 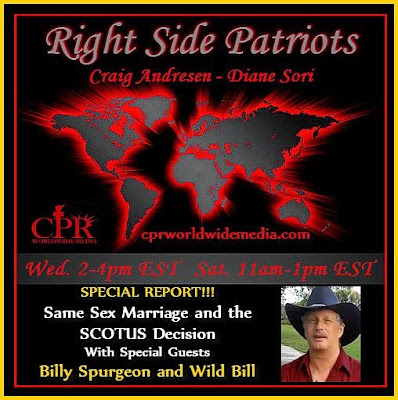 Posted by Diane Sori at 6:14 PM No comments:

Yesterday, in Part 1 of our report 'God v. The Constitution' we laid out the legal aspects of the upcoming Supreme Court case regarding same-sex marriage but, at the bottom of all the hand-wringing and gnashing of teeth however, is the mantra chanted endlessly by those on the far, far right and the holier than thou set...that being...”traditional biblical marriage is only between one man and one woman.”

What this really is, is the ultra-religious ascribing words either to the Bible or directly to God that simply aren’t true but let’s give them a chance and see how it lines up with the facts.

To imply that biblical marriage is between one man and one woman would need a Bible verse or passage as backing to make it fact however, no such verse or passage exists. In fact...the Bible never uses the word “marriage” nor in fact does the Bible ever define marriage. Sure, there are plenty of verses and passages regarding love or husbands and wives that one can look up but none of them, not one, offers any definition regarding the institution of marriage.

That said however, the Bible does offer a great deal of insight into what's called “traditional” marriage.

Abraham for example, had a traditional biblical marriage which included his wife Sara and his other wife...Sara’s handmaiden Hagar. One might well question the wisdom of Solomon after realizing that his biblically traditional marriage consisted of some 700 wives and around 300 odd concubines.

Tradition in those days stood on the principle that if a man takes extra wives, he would have to continue to provide for his previous wives as per Exodus 21:10 and let us not forget that, as per Exodus 21:16 "...if a man were to have sex with a virgin"...he would be required to marry that virgin...as per tradition of course.

In fact, the traditions written of in the Bible makes it clear that marriage was the norm between a man and the woman he had raped and historically, if an army conquered a city or a nation, the wives of the men so conquered would then become the spoils of war and were to be married to the conquerors.

Biblical tradition also held that girls of the age of ten were acceptable wives and should a man die, his younger brother, by biblical tradition, was required to marry the widow and to produce heirs that would not be considered his heirs but those of his dead brother. 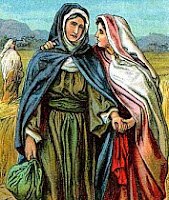 But, if the whole marriage is between "one man and one woman" thing is ordained by God, how can certain biblically historic relationships be explained? There was Ruth and Naomi where it was written..."Where you go I will go, and where you stay I will stay. Your people will be my people and your God my God. Where you die I will die, and there I will be buried. May the Lord deal with me, be it ever so severely, if anything but death separates you and me."

Sure sounds like a marriage doesn’t it? Especially when one reads just a bit further and sees these words..."Ruth clave onto her." For the record, the Hebrew word translated as “clave” is the exact same word describing marriage in Genesis 2:24.

There were also the relationships between David and Jonathon recounted in the Book of Samuel where it was written...”The soul of Jonathan was knit with the soul of David, and Jonathan loved him as his own soul,” and..."From that day, Saul kept David with him and did not let him return to his father's house,” and... "And Jonathan made a covenant with David because he loved him as himself. Jonathan took off the robe he was wearing and gave it to David, along with his tunic, and even his sword, his bow and his belt."

Jonathon, stripping naked in front of David doesn't sound platonic either biblically or currently does it?

However, perhaps the most telling verse regarding this relationship came later in Samuel where it was written..."I grieve for you, Jonathan my brother; you were very dear to me. Your love for me was wonderful, more wonderful than that of women."

And then there was the relationship between the two eunuchs, Daniel and Ashpenaz as related in the Book of Daniel as another example of a same-sex, biblical union, and none of these relationships was ever besmirched in any biblical texts to follow.

Now, before the ultra-religious start in on the notion that these are Old Testament traditions which are thousands of years old and have no bearing on Christian traditions let us remind them that the Old Testament is the only place in the Bible where the actual laws, the only laws ever ascribed directly to the hand of God...the Ten Commandments...can be found and even there...not a single definition or law regarding who can marry whom can be found and not a single condemnation of same-sex relationships is there either.

In the New Testament...again...no definition of marriage nor the word “marriage” exists. In fact, St. Paul himself was no great fan of the institution stating that marriage itself was a compromise between the ideal of celibacy and the human nature regarding the desire for sex. “Now concerning the matters about which you wrote: ‘It is good for a man not to have sexual relations with a woman.’ But because of the temptation to sexual immorality, each man should have his own wife and each woman her own husband.” (I Corinthians 7:1-2)

There are those who point to this being the decisive "marriage is between one man and one woman” tradition but, in fact, that is a far stretch of what Paul was actually saying. Paul was simply providing a remedy for people having multiple sex partners and nothing more.

Throughout the New Testament, arranged marriages were the tradition and remained the tradition up until about 250 years ago with the idea that people would meet, fall in love, and get married by happenstance regarded as wholly inappropriate.

The fact is, the New Testament is replete with mentions of husbands and wives but most of it has to do with how they should live and whether or not they were allowed to divorce but none of it has anything to do with rules regarding who is allowed to marry whom as New or Old Testament times regarded marriage itself as a human condition and not as either a right or a rite.

Marriage rites came later in history and that creates yet another paradox for the ultra-religious.

It wasn’t until the 6th century that laws regarding marriage were created by the church and those laws were written not by God...not by Jesus but by Pope Gregory...a man...and they included such things as outlawing marriage inside of the 4th degree of separation to cut down on inbreeding, outlawing non-related inmarriage to the same degree to cut down on people marrying their in-laws and outlawing concubinage and polygamy as all of these things previously had been considered...traditional.

Here’s a little something else Pope Gregory put into church law or doctrine...both parties in a marriage had to consent to the marriage but not for the reasons we now find to be traditional. Back then, consent was required to keep marriages within the church and those not of the Catholic persuasion were not allowed to consent to marriage. Until Pope Gregory...not consenting to marry was...traditional.

What we have here is societal evolution and as society evolved, so too did traditions but even in those early centuries of Christianity no church law was written prohibiting people of the same-sex from entering into marriage.

In fact, the strongest condemnations of same-sex relationships assessed to the Bible came from later political translations and not from the original Bible itself which does condemn same-sex rape and infidelity just as it does with opposite-sex rape, and infidelity but all of those references in the Bible are the result of interpretations of men and not the direct word of God.

Taken out of context, cherry-picked verses of biblical scripture can be interpreted to mean whatever one wants them to mean in a political light if and only if other parts and verses of scripture are completely ignored but in context, in their original form, those mentions of same-sex relationships are not roundly or wholly condemned at all.

Regardless of what some, the ultra-religious far right, purport to be biblical fact... marriage did not become a religious rite or sacrament until the 12th century, some 1,100 years after the birth of Jesus, and the notion of marriage being between one man and one woman didn’t enter into the picture until the 16th century making both the religious rite and the currently seized upon definition of “traditional” marriage the concept of man, based in political doctrine rather than the law of God based on religious doctrine.

Given that the Constitution does not define marriage and neither does the Bible specifically define the institution...given that the former has everything to do with the rights of all Americans and the latter pertains only to the rites involved with those of certain faiths, given that marriage itself wasn't even a church right until 1,100 years after the birth of Christ and therefore, arguably not a religious but a political matter even in biblical times, and given that marriage has always been a state's issue rather than a federal or Constitutional issue...here is what we believe will be the eventual outcome of the Supreme Court case regarding same-sex marriage. 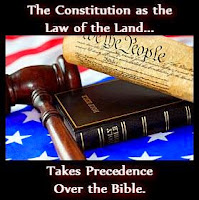 If the Supreme Court, as is its mission, upholds the Constitution, it will render a decision that leaves same-sex marriage in the hands of the states with certain stipulations. One stipulation should be that government cannot and shall not interfere with the doctrines or practices of the church meaning that should a state, either by manner of their Constitution or by a vote of their people allow within their individual states, same-sex marriages, neither the state nor the federal government can impose penalties upon a church that refuses to participate or perform such a ceremony.

Another stipulation should require all states, whether sanctioning the legality of a same-sex marriage or not, to recognize all legal adjuncts to such a marriage regarding any and all benefits offered to opposite-sex couples for same-sex couples.

And the last stipulation, we believe, should be that government...the courts...must not redefine the definition of marriage in regards to any and all religious doctrine for that is the purview of only the church. This also keeps Thomas Jefferson's founding principal of 'separation of church and state' intact.

In closing, we do know that there will be a winner and a loser as a result of the Supreme Court's decision but we truly hope that the Court comes down on the side of sending this issue back to the individual states because that is what our Constitution intended.
Posted by Diane Sori at 12:00 AM 6 comments: