It’s the Fourth of July. Happy Independence Day! I embrace the opportunity to share necessary insights on our country’s sovereign legacy, and the sobering challenges facing it.

Our American culture is getting overrun, sadly, by radicals determined to displace or redefine independence. Instead of recognizing liberty as protection from arbitrary force, the term has become a benefit, an entitlement from the state, something which must be taken from others then granted to us—by force. In other words, a disturbing contradiction is wiping away our political culture, the values we uphold, and which uphold us.

Liberty is not something we need to gain, as much as realize that we possess. The only thing that we can give one another in regards to liberty is a greater awareness of it. The most deafening (yet thankfully defeated) criticism of this true, negative (i.e. removal of something) conception of liberty occurred during my college days. I went to UC Irvine (the same school where students recently deemed the American flag an offensive appropriation of nationalism or something like that).

I was a French major, and had my fill of French theory, too. Mostly snobby, convoluted, suffused with chronic rejections of power, confused with truth. Interesting discussions ensued, all in a nice accent, though. From Foucault, Barthes, and Derrida (a distinguished professor at my alma mater UC Irvine, where I am writing this essay now), the French “critical theory” mindset would be laid out to me and others a moral relativism based on challenging every context and value within text, a speech, or any other form of communication. This literary theory was called “deconstruction.”

The First Fourth of July for a (Genuine) Refugee Family

All the “POPS!” and “BANGS!” from fireworks had my single (for the time) mother edgy. Firing-squads had been murdering thousands of Cubans ‘round the clock. Other thousands of Cubans waged a lonely and hopeless guerrilla war against the massively-armed forces of Soviet proxies Che Guevara and the Castro brothers.
All this drama was taking place 90 miles from U.S. shores—not that anyone would know from the “reporting” by the U.S. media. From these intrepid gumshoes Americans mostly learned of Castro’s heart-warming “literacy campaign,” as transcribed from Cuba’s KGB-mentored propaganda ministry.

All those bombs and gunshots were only months distant on July 4th, 1962–the Fontova family’s first Fourth in the U.S. We landed in south Louisiana, deepest, darkest Dixie. Castro’s propaganda constantly hammered that such areas of the U.S. were infested essentially by “gun and Bible-clinging people with ingrained antipathy to people who aren’t like them.” In the following five decades this dovetailing of Castroite and Democratic “talking points” became very noticeable to Cubans in the U.S.

Email ThisBlogThis!Share to TwitterShare to FacebookShare to Pinterest
Happy 240th Birthday America...
the greatest nation the world has ever known! 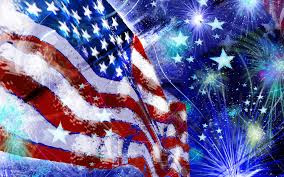