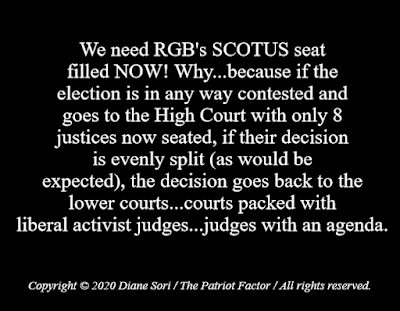 Speaking at the National Constitution Center in Philadelphia on Sunday, Joe Biden implored Senate Republicans to ignore the Consitution when it comes to filling Supreme Court vacancies and listen to the Democrats instead.

"We" being the operative word. There's a video of Biden in 2016 saying there is no such thing as the "Biden rule" and that the Constitution clearly calls on the Senate to vote on a president's Supreme Court nominee even during an election year.

Sen. Ted Cruz (R-Texas) said on Sunday that Senate Republicans have the votes to confirm President Trump’s Supreme Court nominee following the death of Justice Ruth Bader Ginsburg, noting it was “particularly important” that the chamber do so before Election Day.

When asked by host George Stephanopoulos on ABC’s “This Week” if Republicans have the votes to confirm a new justice, Cruz said it was likely. He then pivoted toward Democratic presidential nominee Joe Biden challenging the election results while staunchly avoiding the notion that Trump has said he would do so if results show he lost.