Let's start with the fact that the impeachment inquiry is not a real event, it’s an Adam Schiff orchestrated and scripted duplicitous abuse of power...with behind closed doors depositions being but a dress rehearsal for public hearings that are simply a man and a party on a phishing expedition looking for a crime to fit their ultimate agenda of impeaching the man they know they simply can't beat come 2020.

And while Democrats are now foolishly reveling in what they think are “big wins” for their side regarding what in reality is a “political coup” masquerading as an “impeachment inquiry,” President Trump in the end will have the last laugh for second and third-hand hearsay will not make for a strong legal case where it matters most...as in the U.S. Senate...no matter that Rep. Mike Quigley (D-IL), foolishly stated that hearsay evidence is better than direct evidence. And while hearsay might make for good soundbites on the six o'clock news and make for eye-catching headlines in mainstream and online media rags, there remains certain truths as to the why we're at the point we're at now what with Nancy Pelosi claiming that the House will impeach President Trump before Congress begins its Christmas recess.

Read entire article here: https://thepatriotfactor.blogspot.com/2019/11/s-pecial-report-trumps-only-crime.html
Posted by Diane Sori at 9:56 AM No comments:

President Trump made an unannounced departure from the White House Thursday eveing to attend the dignified transfer of two U.S. Army soldiers who were killed in a helicopter crash in Afghanistan.

Their bodies were returned to the United States at Dover Air Force Base in Delaware.

Email ThisBlogThis!Share to TwitterShare to FacebookShare to Pinterest
Pete Buttigieg, Like So Many Others, Needs a History Lesson

The story is here: Pete Buttigieg, mayor of South Bend, Ind., who is running for the 2020 Democratic presidential nomination, reiterated on Monday [October 28] that the United States should condition its assistance to Israel on the Jewish state not fulfilling Prime Minister Benjamin Netanyahu’s campaign promise to annex parts of the West Bank. “We […]
Read in browser »

Today, Friday, November 22nd, from 7 to 9pm EST on American Political Radio, RIGHT SIDE PATRIOTS Craig Andresen and Diane Sori discuss their Special Report: 'Trump's Only Crime...Exposed'; and the latest on the impeachment public hearings. 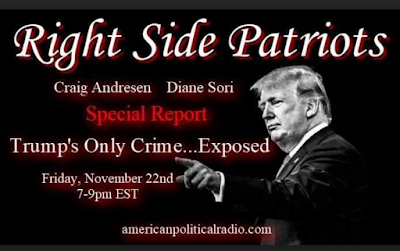