Florida Race for Governor Is Symbol of Everything Wrong with Politics

Contests for governor of Florida have recently gone from being competitive tussles between in-state partisans to no-holds-barred death matches with big national bucks flowing and network reporters presiding over televised debates. This year's battle between incumbent Republican Gov. Rick Scott and Republican turned Democrat challenger Charlie Crist has become the over-the-top crowned jewel of everything bad about modern day "national" politics.
The real genesis of this "nationalization" of Florida politics can be found in the 2000 presidential electoral deadlock that held the nation spellbound for months. Many Americans who are otherwise apolitical still refer to "hanging chads" as if they were old grizzled political pundits.

Nothing was ever quite the same after that epic battle for Florida's electoral votes. National media reported on Jeb Bush's reelection race for governor in 2002 against a hapless and weak Democratic nominee as if it were the Kennedy-Nixon contest of 1960. Floridians became used to big national political media figures participating in their statewide debates.

The large but oft ignored state that produced the likes of "Walkin' Lawton" Chiles and slogans like "Hey Buddy (MacKay), you're liberal" graduated from just normal intrastate politics to the bigtime of national nastiness.

And nothing can compare to this high dollar, high octane and super vicious race between Scott and Crist.

What troubles many who have followed Florida politics for years is the unspoken belief that neither of these two candidates seems to have anywhere close to meaningful and altruistic reasons for seeking another term as governor.

For better or worse there is little doubt to most that if the dictionary had a definition of "Professional Politician," former Gov. Crist's picture would be right by its side.

Some believe Crist sees himself as the character "Mr. Cellophane" in the hit Broadway musical turned movie "Chicago." He seemingly thinks that he can glide in and out of rooms, meetings, debates or even various political parties without anyone taking notice of him. Sort of a Caspar the Ghost with a tan.

Scott -- with his long neck, gleaming head and wide and sometimes bulging eyes -- seems a character straight out of central casting as well. Sort of a mix between a leaner version of the animated commercial character "Mr. Clean" and the late-comedian Rodney Dangerfield who always claimed to get "no respect."

Both are harmless characters in a very hurtful and vicious contest.

Some believe Crist wants the job because he knows no other profession than politics and, as most insiders also know, he loves to be loved.

Scott appears to some as having made so much money so early in life that he chose a new "hobby," that of being governor of Florida.

Florida's position of governor, while powerful, doesn't wield anywhere near the omnipotent attributes of the same position in some other states. For example, Florida governors have to deal with a voting cabinet which could become a real problem if its makeup were to be split between Republicans and Democrats.

Plenty of voters are wondering why these two would spend megabucks and do everything but mud wrestle just to enjoy four more years in Tallahassee. Their vicious ads and personal attacks during debates have made both men appear desperate for power and oblivious to the public's disdain for their tactics or for politicians in general.

While both men are nice people when away from the political limelight, both are just too overwhelmed -- indeed, consumed -- by politics for their own good. Indeed, they reek of it.

Crist takes many of his cues from a collection of trial lawyers who have the political acumen of rank amateurs. Scott follows the lead of the usual GOP suspects. The type that might advise the boneheaded choice of protesting some silly electrical fan behind an opponent's debate podium by keeping their candidate off the stage while others waited.

The real winner in this national debacle may be Libertarian Adrian Wyllie. While he won't be close, don't be shocked if he doesn't exceed expectations. After all, Scott and Crist have lowered those expectations substantially.

The official autopsy is in and it suggests that the gunshot wound to Michael Brown’s hand indicates that he was reaching for police officer Darren Wilson’s firearm during an altercation, which ended in with his death last summer. The event sparked mass unrest in Ferguson, Missouri and a discussion about race relations in America.

Moreover, the autopsy’s results come into conflict with eyewitness reports, which said that Brown was shot while running away from Officer Wilson (via St. Louis Dispatch) [emphasis mine]:


The St. Louis medical examiner, Dr. Michael Graham, who is not part of the official investigation, reviewed the autopsy report for the newspaper. He said Tuesday that it “does support that there was a significant altercation at the car.

Graham said the examination indicated a shot traveled from the tip of Brown’s right thumb toward his wrist. The official report notes an absence of stippling, powder burns around a wound that indicate a shot fired at relatively short range.

But Graham said, “Sometimes when it’s really close, such as within an inch or so, there is no stipple, just smoke.

The report on a supplemental microscopic exam of tissue from the thumb wound showed foreign matter “consistent with products that are discharged from the barrel of a firearm.”

Dr. Judy Melinek, a forensic pathologist in San Francisco, said the autopsy “supports the fact that this guy is reaching for the gun, if he has gunpowder particulate material in the wound.” she added.

Sources told the Post-Dispatch that Brown’s blood had been found on Wilson’s gun.

Melinek also said the autopsy did not support witnesses who have claimed Brown was shot while running away from Wilson, or with his hands up.

She said Brown was facing Wilson when Brown took a shot to the forehead, two shots to the chest and a shot to the upper right arm. The wound to the top of Brown’s head would indicate he was falling forward or in a lunging position toward the shooter; the shot was instantly fatal.

A sixth shot that hit the forearm traveled from the back of the arm to the inner arm, which means Brown’s palms could not have been facing Wilson, as some witnesses have said, Melinek said. That trajectory shows Brown probably was not taking a standard surrender position with arms above the shoulders and palms out when he was hit, she said.

The Islamic State has made repeated calls for Muslims in the West to attack military, government and law enforcement.


Canadian politicians who voted for war against the Islamic #Khilafah now in terror during todays #IS attack in Canada pic.twitter.com/4zAvXrOblU
— AbuUmar8246 (@Abu_Umar8246) October 22, 2014

Muslims supporters of the Islamic State applauding and or taking credit for the coordinated attacks on Canada today. There are no “lone wolves” in the ummah:

And another Muslim supporter of the...

Ottawa gunman is convert to Islam

Yet another convert to Islam misunderstands his new religion and gets the crazy idea that it has something to do with violence against unbelievers. If only Barack Obama or John Kerry had been around to set him straight.


The man behind the Ottawa shootings is a Canadian convert to Islam whose passport had been seized by authorities, federal sources say.

While police have not confirmed the man’s identity, sources have told Canada’s Globe And Mail, Reuters and Associated Press that the main suspect was Michael Zehaf-Bibeau.

Just before 10am on Wednesday local time (1am AEDT Thursday), a gunman shot and killed Corporal Nathan Cirillo and then opened fire on the country’s Parliament buildings.

The Globe and Mail newspaper said he was recently designated a “high-risk traveller” by the Canadian government – meaning it was feared he would travel abroad to commit crimes – and that his passport had been seized.

Zehaf-Bibeau had a history of drug use and had multiple run-ins with Canadian police in the French-speaking province of Quebec.

Authorities have not yet ruled out the possibility that there are other shooters still on the loose….

Another senseless death in the name of islam

Cpl. Nathan Cirillo, 24, based in Hamilton, identified as the soldier who was shot and killed at the War Memorial today. 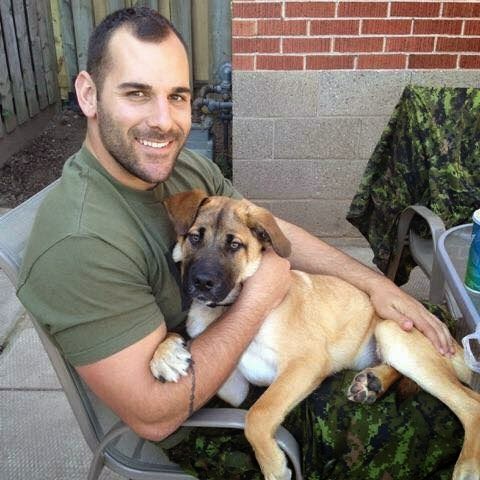 Cirillo was a reservist serving in Hamilton from the Argyll and Sutherland Highlanders of Canada regiment.
Posted by Diane Sori at 12:23 AM 1 comment: