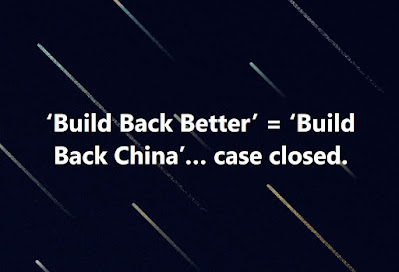 Sen. Ted Cruz addressed Dr. Anthony Fauci’s attack on him after the Texas Republican suggested he be investigated for allegedly making false statements before Congress.

“Anybody who spins lies and threatens and all that theater that goes on with some of the investigations and the congressional committees and the Rand Pauls and all that other nonsense, that’s noise, Margaret, that’s noise,” the director of the National Institute of Allergy and Infectious Diseases told CBS News’s Margaret Brennan.

Specifically responding to Cruz’s argument that he should face prosecution by the Department of Justice, Fauci laughed it off.

“Yeah, I have to laugh at that,” he said. “I should be prosecuted? What happened on Jan. 6, senator?” Read more and see video here.

Email ThisBlogThis!Share to TwitterShare to FacebookShare to Pinterest
Where US workers are quitting jobs at record rates
By Andrew Mollica and Sarah Chaney Cambon / Wall Street Journal / FOX Business

Workers in the U.S. resigned from a record 4.4 million jobs in September. Many Americans are leaving roles for better working conditions and pay amid a historically fast economic recovery.

The wave of resignations hasn’t been uniform across the country, though. States in the West, including Hawaii, Montana, Utah and Oregon, saw the largest growth in quits in September, according to the Labor Department. Eighteen states broke or tied their records for quits levels in September.

Industries experiencing high turnover rates drove quits in the Western U.S. in September and led many Northeastern states to see a more rapid increase in quits since the start of this year. Quits in the education sector—which accounts for a larger share of employment in Northeastern states than many others—have risen at the fastest...Read more here.