Op-ed:
Obama vs. the Constitution and Catholic Church
By: Diane Sori
The most important document on which the founding of this Republic (and yes we are a Republic NOT a democracy) is based upon is the Constitution.  Our Constitution is the highest law in our land, the law ‘We the People’ and our elected officials are supposed to live by, honor, and respect.  The Constitution describes how our government works, what it can and can’t do, how it must protect the rights of every American, and how it must secure and ensure our nation’s survival for countless years to come.
Our Founding Fathers created this document to put constraints on the government and to give more power to ‘We the People’ than was ever granted to any citizenry that came before.  The Constitution assures us the right to “Life, Liberty and the Pursuit of Happiness” above all else, gives us the freedom to practice religion as we see fit, and protects us from enemies both foreign and domestic.
Yet the Constitution, no matter if we honor or if we defame it is the one thing all Americans have in common.
Now as we get nearer to the November election one stark difference between the two candidates becomes more and more apparent...Mitt Romney upholds and honors both the Constitution and religious freedoms of our great land, while Barack Hussein Obama defames both every chance he gets, especially with his implementation of the monstrosity known as ObamaCare.
With the Supreme Court getting ready to rule in a few weeks on the constitutionality of ObamaCare, Barack Obama’s so-called signature piece of legislation, it’s obvious to anyone who understands the law that this abomination violates the Commerce Clause (Congress has the right ‘to regulate Commerce with foreign Nations, and among the several States, and with the Indian Tribes), the 9th Amendment (addresses rights of the people that are not specifically enumerated in the Constitution), and the 10th Amendment of the Constitution (which states the Constitution's principle of federalism by providing that powers not granted to the federal government nor prohibited to the States by the Constitution are reserved to the States or the people).
By strong-arm forcing this bill through Congress, Obama has wantonly assumed federal powers not granted him by the Constitution.  Plus, the waivers and opt-outs he so happily granted to ‘certain’ individuals and groups violates the Equal Protection Clause of the 14th amendment, which prohibits state and local governments from depriving persons of life, liberty, or property without certain steps being taken to ensure fairness to all.   This Clause makes the Bill of Rights applicable to the states, as well as to recognize substantive and procedural rights, yet Obama nor ObamaCare recognizes either.
And while many individuals, organizations and states do get to opt out of ObamaCare, the Catholic Church is unable to.  In ObamaCare’s HHS Mandate, Church institution employers must offer, and employees must buy, insurance plans that have policies that go against the very teachings of the Church, paramount of which is that the plans must contain both contraceptive coverage and morning after pill coverage, which devout followers of doctrine believe to be abortion.
Yet Barrack Hussein Obama cares neither for the rule of law nor for the doctrines and tenets of the faith he professes to belong to.  Barack Hussein Obama makes a mockery of our Constitution every chance he gets (ObamaCare is but one example), and while other presidents have at times blurred the meaning of certain parts of that document, no other president in our nation’s history has so blatantly defamed and dishonored our country’s lifeblood.
It’s time for Barack Hussein Obama to vacate the highest office is in our nation and ‘We the People’ with the Constitution as our banner need to make sure he does.
Posted by Diane Sori at 6:51 PM 3 comments:

Call for crackdown on black-on-white terror 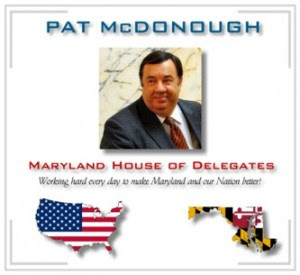 A state lawmaker in Maryland, concerned about “black youths” who are “terrorizing” Baltimore’s upscale Inner Harbor, wants the governor to send in state troopers to make the area safe.

Pat McDonough, a member of the Maryland legislature, has been accused of launching a “racially tinged publicity stunt” but stands by his comments.

“The Inner Harbor is a dangerous place for residents and visitors,” said McDonough. “And it does us no good to avoid this hard truth: Black youth are responsible for a sustained and dangerous period of violence in one of Baltimore’s nicest neighborhoods.”

The most recent episode of racial violence happened on St. Patrick’s Day. A white tourist was attacked, beaten, robbed and stripped of his clothes by a gang of laughing and violent black people, reports confirm.

The attack was captured on two videos posted to YouTube that are attracting hundreds of thousands of viewers.

Mayor Stephanie Rawlings-Blake called the episode a “bar brawl.” And the Baltimore Sun newspaper suggested that violence at the Inner Harbor was part of an “Easter tradition” of “kids milling around.”

After the beating, police commissioner Frederick Bealefeld told reporters that the violence was an isolated incident, not racially motivated and that only about 100 people were involved.

But two months later, reporters from the Baltimore Sun listened to the audio tapes of police dispatchers and discovered there were at least five times more people involved and much more violence, including previously unreported stabbings and beatings.

And according to witnesses and video accounts, all the perpetrators were black.

McDonough’s “aha” moment came two months ago when he and his wife were in the area for a charity fundraising dinner.

“This was a Wednesday night,” he said. “And when I stopped at a traffic light, I saw a hundred young black people in the next block over fighting and walking down the middle of the street.

“There were no police around. No police reports. And no stories in the paper. Violence and mayhem among young black people in the Inner Harbor is the new norm,” said McDonough. “And this has to stop.”

McDonough’s comments were echoed by many callers to his talk show on WCMB in Baltimore and by a New Jersey tourist as well.

“My husband and I came to Inner Harbor last month and stayed at a hotel there,” said the visitor to Baltimore who did not wish to be identified. “That night, we looked out our hotel window and saw at least 100 black people walking down the middle of the street, fighting and acting in a menacing way. The police did not show up for at least an hour. When I got back to New Jersey, I was curious about what happened. Then I learned there were no police reports. No newspaper stories. It was as if it had never happened.”

The St. Patrick’s Day riot was just one of several violent events people in the Inner Harbor tinged with race.

On March 18, hundreds of people streamed into the Inner Harbor, with dozens of fights, a stabbing, threats and other violence that resulted in 10 arrests. Police used a Taser on one of the suspects.

During Fourth of July fireworks last year, a child was shot and a tourist killed among other violent episodes at the holiday celebration.

One mile away from the Inner Harbor, in Upper Fells Point, a group of 10 to 20 black people attacked white residents in four separate cases, according to reports.

In April 2011, another large group of people streamed through the Inner Harbor, fighting and destroying property. One of the rioters was stabbed.

To put the April beating “in historical perspective,” the Baltimore Sun reprinted a story from 1995, when large groups of black people created violence during and after an annual jazz concert.

“Rodney A. Orange, president of the Baltimore chapter of the National Association for the Advancement of Colored People, said black teens have complained to him that ‘they feel stereotyped. They only want to enjoy their evening, wherever they are going, but very often they’re looked at suspiciously.’”

‘Race baiter’
McDonough’s call for state police to protect the Inner Harbor from “black youths who are terrorizing” the area drew sharp rebuke from local elected officials and the media.

The Baltimore Sun called on the Maryland legislature to sanction McDonough.

Meanwhile, in neighboring Pennsylvania and Delaware, some were asking what took McDonough so long.

Last summer in Philadelphia, after several years of large-scale violent episodes, some involving more than 1,000 black people on the streets of South Philadelphia, Mayor Nutter reversed his earlier stand that the riots were “really not much,” had no racial component and were the fault of “poor reporting.”

Less than a month later, according to the Philadelphia Daily News, he confessed his change of heart in front of a Philadelphia Baptist church.

“You have damaged your own race,” he said of the rioters. “Take those … hoodies down, especially in the summer,” Nutter, the city’s second black mayor, said in an angry lecture aimed at black teens. “Pull your pants up and buy a belt ’cause no one wants to see your underwear or the crack of your butt.”

The head of Philadelphia’s chapter of the National Association for the Advancement of Colored People, J. Whyatt Mondesire, said it “took courage” for Nutter to deliver the message.

“These are majority African-American youths, and they need to be called on it,” Mondesire said.

In Delaware, violence among black teenagers was so rampant that the Black Elected Officials of New Castle County wrote a similar letter to the governor of Delaware, asking for the National Guard to patrol the streets of Wilmington.

McDonough was seemingly unfazed by the whirlwind of criticism facing him for his remarks.

“The Good Book says speak the truth and fear not,” he said. “And for everything they are calling me, you will notice they are not saying one thing. No one is saying that what I said is untrue.”
Posted by Diane Sori at 9:05 AM No comments: