Today is Memorial Day...the day we set aside to honor and remember those who made the ultimate sacrifice to keep us safe and free at home.  As such, all my blog posts today (scroll down) are in honor of those brave warriors. God Bless them all
and God Bless America. Posted by Diane Sori at 2:16 PM No comments:

All told, countless millions have died defending our way of life. From the days of Washington to the present age, their sacrifice has both inspired and humbled us. Our veterans, as one member of Congress nicely put it last week, “are the heart and soul of this country.” He's right.

And yet it’s important to remember that Memorial Day is not just another holiday; it's a day to explicitly honor members of the military who have died on domestic and foreign battlefields. As the U.S. Department of Veteran Affairs explains,


Memorial Day, which is observed on the last Monday of May, commemorates the men and women who died while in the military service. In observance of the holiday, many people visit cemeteries and memorials, and volunteers often place American flags on each grave site at national cemeteries. A national moment of remembrance takes place at 3:00 p.m. local time.


Let us us take a moment, then, to remember our veterans past and present, but especially those who've fought and died so that our nation, as Lincoln famously said, “might live.” It is to them we are, and will always be, indebted to.

Email ThisBlogThis!Share to TwitterShare to FacebookShare to Pinterest
WHERE IS THE 'MEMORIAL' IN MEMORIAL DAY

Marc understood that there was a price for our freedom and like so many others before him, was willing to go into battle to keep America free.

Memorial Day is set aside to remember those brave warriors who while defending us, lost their lives in combat.

We have over 600,000 men and women who have died in combat since WWI. 600,000 Gold Star families and Brothers at arms, who have buried a loved one and to whom every day is/was Memorial Day.

You can imagine the pain and frustration to the friends and families of these fallen heroes when the majority of Americans are clueless as to the real meaning of Memorial Day. Our loved ones gave their final breath so that you could enjoy all of the freedoms and blessings that you have in America. All we ask is that as a nation we come together this weekend and acknowledge, honor and remember our heroes.

I have been on a campaign for years trying to educate people about the history and meaning of Memorial Day what it is and what it is not! It is not a time to "Celebrate Memorial day", it is not "Happy Memorial Day."  I am sure that ignorance plays a part in the party mentality of the 3-day weekend. We see major advertising about big "blow out" sales, advertisements to "kick off your summer", prepare for the big bar-b-ques and camping trips and parades. Many families know it marks the end of the school year and the community pools will be opening.

I was part of that ignorant group for years. I wasn't taught the real meaning of Memorial Day. Oh we visited a few graves through the years and placed flowers on the graves of family members who had died in child-birth, from sickness and different causes. Most of the time it was just a family gathering with picnics and bar-b ques enjoying all of the freedoms that we have but not reflecting on those who paid the ultimate price so we could enjoy them. I was not taught, and I am sorry for the opportunities that were missed to honor our fallen, and focus on the sacrifices made for me.

Often times people mistakenly recognize and thank all of those who have served. Veterans Day is the National Holiday when we do that. I've dedicated my life to honoring and thanking our troops 24/7 364 days of the year, but Memorial Day is for those who died in war.

Tradition used to be that businesses closed on Memorial Day and flew their flags at half staff to remember our war dead, what a switch from today, where it has turned into a major money making weekend.

After the civil war ended Maj General Logan established Decoration Day and spoke these words. : "We should guard their graves with sacred vigilance. ... Let pleasant paths invite the coming and going of reverent visitors and fond mourners. Let no neglect, no ravages of time, testify to the present or to the coming generations that we have forgotten as a people the cost of a free and undivided republic."

Have we as a nation forgotten the cost? Will you help me put Memorial back in Memorial Day?

Please plan your weekend to remember those heroes who gave everything for you. I'm not asking you not to have a bar-b-que, picnic or gatherings with families or to walk around with sullen faces the entire weekend. Our loved ones sacrificed so you could enjoy those freedoms, but there should be somber moments when we focus on the cost that was paid.

As you gather take advantage of that time together and take a few moments to share the story of a fallen hero, remind others what the real meaning of Memorial Day is about. Tell your children and grandchildren about these brave heroes who paid the price for them to enjoy this day, take them to a National Cemetery and place flowers on graves or stop and honor them. Attend a ceremony or memorial, watch a video or TV program about our fallen, read a story, find a Gold Star family near you and let them know you will never forget. If you know other Veterans ask them if they've lost a teammate and maybe they will tell you about them. Pray for the families of the fallen.

Technology has changed our world and it is so easy to find the History of Memorial Day, read about heroes, and reach out and honor and remember our fallen and their families.It is also a great way to remind your friends the real meaning of Memorial Day, use that tool to educate others and honor our fallen heroes who are America's National Treasures.

While we look back and remember our fallen heroes this weekend, we focus forward and live our lives worthy of the sacrifice they made for you, for me and for America, "the land of the free, because of the brave."

Email ThisBlogThis!Share to TwitterShare to FacebookShare to Pinterest
Op-ed:
A special day to honor American heroes
By: Diane Sori

I've been asked to re-post a special tribute (with some updates) I wrote and posted last Memorial Day as remembrances and honor become even more important with all that is going on with this traitorous administration and the VA... 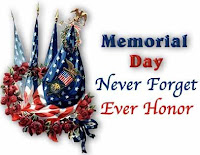 What is a hero...a hero is man or woman of distinguished courage or ability, admired for his or her brave deeds, fortitude, and noble qualities.

In other words...a Soldier, Sailor, Marine or Airman.

Today is Memorial Day, a day to remember and honor all those brave heroes who made the ultimate sacrifice in our nation's service...a special day where a grateful nation says thank you.


Memorial Day is also a day to honor and say thank you to our Veterans, those heroes who by the grace of God made it home, who are sometimes forgotten in the shuffle of everyday life.

This Memorial Day we must not forget to keep our brave men and women who are currently fighting overseas in our thoughts and prayers for they are the ones who are now keeping us safe and free at home.

A little history...Memorial Day started as a day to honor Union soldiers who died during the Civil War. After World War I it was extended to include all men and women who died in any war or military action.  Known originally as Decoration Day, the current name did not come into being until after World War II. Decoration Day and then Memorial Day were always on May 30th, regardless of the day of the week.  In 1968, the Uniform Holidays Bill was passed as part of a move to use federal holidays to create three-day weekends.  Since 1971, Memorial Day has been officially observed on the last Monday in May.

On Memorial Day it’s tradition to fly the American flag at half-mast from dawn until noon. Many volunteers place a small American flag on the graves of the fallen who are laid to rest in national cemeteries all across our country.  Also, in many cities and towns across America, Memorial Day Parades honor both the fallen and those serving in our military today.

While today there will be picnics, barbecues, and parties galore, please don’t forget that while you are having fun and enjoying the day, that what you are doing was only made possible by those who sacrificed their lives in the name of freedom.

So now I leave you with this, 'A Soldiers Prayer,' whose words really honor ALL who’ve served.

The soldier stood and faced his God which must always come to pass...
He hoped his shoes were shining just as brightly as his brass.
"Step forward now, you soldier, how shall I deal with you?
Have you always turned the other cheek?  To My Church have you been true?"
The soldier squared his shoulders and said, "No, Lord, I guess I ain't...
Because those of us who carry guns can't always be a saint.
I've had to work most Sundays and at times my talk was tough,
And sometimes I've been violent, because the streets are awfully tough.
But, I never took a penny that wasn't mine to keep...
Though I worked a lot of overtime when the bills got just too steep,
And I never passed a cry for help, though at times I shook with fear,
And sometimes, God forgive me, I've wept unmanly tears.
I know I don't deserve a place among the people here...
They never wanted me around except to calm their fears.
If you've a place for me here, Lord, It needn't be so grand,
I never expected or had too much, but if you don't, I'll understand."
There was a silence all around the throne where the saints had often trod...
As the soldier waited quietly, for the judgment of his God,
"Step forward now you soldier,
Walk peacefully on Heaven's streets,
You've done your time in Hell."

Dedicated to all who made the ultimate sacrifice...you are now safe in God's embrace...God Bless America and our military always...and remember...