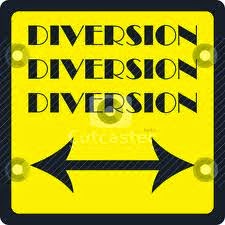 Diversion: the act of turning aside, as from a course of action, a purpose, or serious occupation

And diversionary plays by the media have served Obama well, including the diversion of all diversions that simply does NOT go away...'da' plane. Notice how 'breaking news' about 'da' plane always seems to surface when anything Benghazi gets too close for comfort. But whether it's 'da' plane, the kidnapped girls in Nigeria, stupid comments by a racist old man, it's any and everything to keep our eyes and ears off Benghazi.

Diversion number one...now don't get me wrong as the loss of the 239 lives on Flight 370...that is if they are indeed lost and NOT being held hostage somewhere...is a serious matter but after two months of searching NOT one bit of that plane has been found. Nothing has washed ashore anywhere... nothing has floated to the surface...and the pings once heard have proven to NOT have emanated from 'da' plane. NO satellite pictures have found it...NO radar devices have found it...NO manned searches have found it...so come on guys logic dictates 'da plane' just is NOT in the water NO matter how much the truth is glossed over or out-and-out avoided.

In the meantime, more time and money is being wasted searching the ocean. And now there's another four or five day delay in starting yet another ocean search...this time because of a malfunctioning part on the Bluefin-21 submersible along with a broken transponder on the Bluefin's so-called 'mother ship'...a transponder that was damaged when a vehicle being hoisted onto the deck of the Australian search vessel 'Ocean Shield' struck the navigation transponder that extends over the side of the ship.

It's always something hampering the search it seems, so here's a bit of advice... STOP looking in the ocean and concentrate the search over land before 'da' plane is found sticking out of a building in Tel-Aviv. But hey, all this plane news does help keep the focus of Benghazi...conniving media that we all so love continues to take the focus off Benghazi. 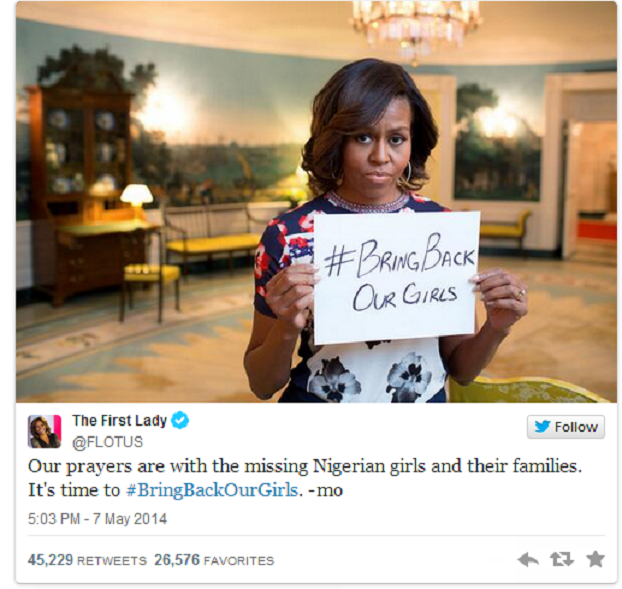 Diversion number two...the kidnapped girls in Nigeria...a very sad situation indeed as these girls... some mere children...have been taken against their will to be sold as chattel either as wives or as sex slaves. There's islam for you...peaceful religion that it is...NOT. But the thing with the kidnappings is that it happened weeks ago...in fact young boys were kidnapped and killed previously without a certain president saying a word...and suddenly now our ever-loving Barack HUSSEIN Obama steps up to the plate to offer U.S. help in finding the girls just as the Benghazi e-mail story breaks. And then into the mix comes Michele who poses with a hashtag sign...like that will free the girls. Ludicrousness personified...but what a great diversion from Benghazi. So as Obama rushes in to save these muslim girls, remember he left four Christian Americans behind to die.

Diversion number three...Benghazi has been sidetracked yet again by the most fabricated of stories that really was NOT a story, and had NO business being a story, let alone a story shoved down our throats 24/7 for days. And I'm talking about the story of a private conversation between an aged bigot and his bought-and-paid- for mistress who used it against him after the bigot's wife and family sued said mistress. And these words did NOTHING but prove the aged bigot of being what the aged bigot freely admits to having always been...a bigot. So the bigot who admits he's a bigot and has been a bigot for years now has had his basketball team taken away from him, was fined millions of dollars, and has become a public pariah. But folks, being a bigot is NOT a crime...disgusting YES but a crime NO. And while the aged bigot spoke in a non-threatening manner about blacks...blacks he paid very well for playing a game...one cannot help but wonder about all the blacks that perpetrate racial remarks against whites...nary a word is said by the media...nary a punishment is doled out.

But this story gained a life of its own taking the attention off Benghazi...again.

The media...the in-the-pocket of Obama media...has decided that Benghazi...the truth about Benghazi...must be hidden at all costs and what better way to do so than to force us to focus our attention on anything but Benghazi, and doing so by NOT actually fabricating stories but by taking stories that really have limited interest and blowing them up into major crisis's deserving of our focused attention...focused attention for days...for weeks...on end.

Even the constant reporting on Obama's many golf outings and Michelle's many, many, many ad-nauseum vacations taken on our taxpayer dime helps to keep our attention off Benghazi. And it helps to take attention away from a man obsessed with his narcissistic self...obsessed with public opinion while he turns his back on 'We the People' as he works to implode our country from within. And as this Obama obsessed, overly devoted media circles its protective wagons around their self-anointed 'savior' of us all, it's once again 'We the People' who are being deliberately led astray so as to keep Obama's missteps...Obama's acts of treason...barely heard above a whisper.

Unquestionably believing what they’re told by the Obama administration...by Obama mouthpiece Jay Carney...and blindly believing that Barack HUSSEIN Obama is above the rest of us and thus untouchable...the media does their job of divert and deflect very well or at least they did for now the tiring myth of America's first black president...a president who spewed the line of hope and change has been found to have an Achilles heel and that Achilles heel goes by the name Benghazi.

So to the media I say, bring on your diversions...bring it on...for America has started to wake up and will NO longer accept your diversions except to give them a mere token look...for leaving four brave Americans behind to die has now become the Obama's Achilles heel that will NOT go away.