Op-ed:
The 'Race Card' gets played yet again
By: Diane Sori 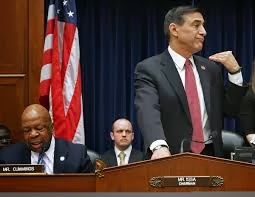 “I broke no rules and he broke the decorum of the House.”
- Oversight and Government Reform Committee Chairman Darrel Issa referring to Elijah E. Cummings' rants after his mic was turned off.

Sounds good on the surface but Darrel Issa...like so many Republicans before him...cowering in fear of being called a racist changed his tune and ran scared when the race card was indeed thrown at him.

We all knew it was coming...Issa surely knew it was coming...and so it came to pass that the left did pull out the race card as it's the most effective and feared weapon in their liberal arsenal. And why did they use it this time...simply because Darrel Issa dared to shut off the mic of a BIG mouth Democrat who refused to stop talking...who refused to stop play-acting...after Issa had adjourned the farce of a hearing where the infamous Lois Lerner again evoked 'the Fifth'. "On the advice of my counsel, I respectfully exercise my Fifth Amendment right and decline to answer that question”...she croaked every time she was asked about her involvement... about this administration's involvement... in the IRS scandal targeting conservative and TEA Party groups. And this was after she had 'promised' to answer specific questions as to why she had, in e-mails, referred to the TEA Party in highly critical and insulting ways.

Lois Lerner had 'promised'...now there's a lesson Issa needs to learn as there's as much credence in a Democrat's promise as there is in Obama beating Vladimir Putin in an arm wrestling match.

And oh yes, besides Lerner's broken promises, the BIG mouth Democrat whose mic Issa had silenced just happened to be black, and rumor has it that he was put on that specific committee just to make sure Lerner didn't crack under pressure and dare to speak 'the truth'...the dirtiest of all the dirty words in the liberal-speak dictionary.

Congressman Elijah E. Cummings was out of order...was most assuredly out of line...but all that matters to Democrats and race baiters is the color Cummings' skin for how dare a conservative white man call, especially publicly, a liberal black man to task. Sad how in today's America skin color trumps all. 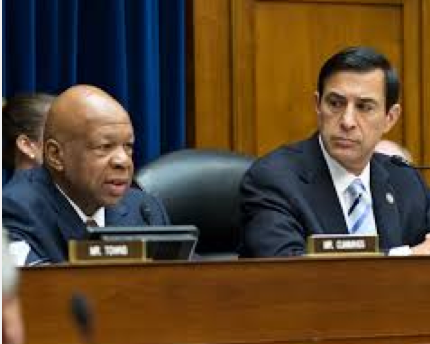 Issa felt that Cummings’ anger at being denied the chance to speak was nothing more than a “pre-staged event." I say it was done for 'theater' to set the stage for the race card to again walk out and take a bow...as always happens when the left has NOTHING else to use. And true to form when any black leader's actions are questioned, allegations of racism and oppression...like those now being leveled at Issa....always take center stage.

Cummings “had quite a hissy fit” and “broke the decorum of the House" according to Issa, and that is true for the video of the hearing (http://abcnews.go.com/blogs/politics/2014/03/rep-elijah-cummings-gets-cut-off-at-house-irs-hearing/) shows a man in meltdown mode...but because he's black that doesn't seem to matter. But also sadly true is that Chairman Issa, cowering in fear of the race card as the Congressional Black Caucus called for his removal from his leadership post did the unthinkable, and in an interview with his local paper he apologized to Cummings...a man who has pulled theatrical stunts just like this before. And to make matters worse several other Republicans on the committee also apologized to Cummings for Issa’s actions.

And so yet another Republican refuses to stand strong on principal, and we wonder why the party of Lincoln and Reagan keeps losing elections in what should be easy wins.

And now into the fray comes none other than America's chief racist, the Reverend Jesse Jackson himself, with this tweet, “Congressman Darrell Issa’s behavior was crude, wrong, racist and mean towards Congressman Elijah Cummings. Do you agree?"

The simple fact is that Darrel Issa was rightfully angry...furious actually...that Lois Lerner...for the second time mind you...wasted both the time of Congress and our taxpayer dollars in what turned into a farce of hearing...a farce because in the time leading up to Lerner's appearance Issa and 'We the People' were led to believe that she would talk. And all Cummings did after Issa adjourned the meeting was to continue on with his bloviating political statement about his, and his alone, perceived unfairness of the hearings instead of asking what Issa was willing to allow him to ask...that being a direct question. 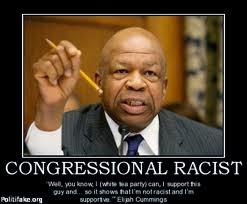 And herein entered the race card for all this tit-for-tat that went on from the point of adjournment had NOTHING to do with the Lerner/IRS issue at hand but had everything twisted around to be about the color of Cummings' skin. And that in and of itself is even sadder than the Lerner debacle for the Democrats have made everything...YES everything about race...about skin color...and in doing so they have in actuality set race relations back decades and the Republicans have fallen into their oh-so-wanted trap. We all know that, unfortunately, true racism still does exist to some degree in today's America, but most of it has either been caused or fueled on by the man currently occupying the White House.

And by making everything about race...by diluting the true meaning of the word 'racism'...Barack HUSSEIN Obama and his minions have allowed true legitimate cases of racism NOT to be taken seriously...in effect making them irrelevant...for there are only so many times people will listen to, tolerate, or accept the crying of wolf...or in this case the playing of the much overused race card along with its claim that Republicans want to shut down the minority black voice...which we all know NOT to be true. But always remember that what is true in our conservative real world is foreign in the liberal left world of make believe.

And so the race card game continues on via the IRS scandal as Issa's apology has hurt us right now for it showed our side as weak...weak because shame on Darrel Issa to have caved out of simple fear and targeted intimidation...and this surrendering every time the race card is played must stop and stop now if we are to win in November...if we are to take our country back...period.
Posted by Diane Sori at 12:01 AM