Op-ed:
The Benghazi cover-up leads straight to the Oval Office 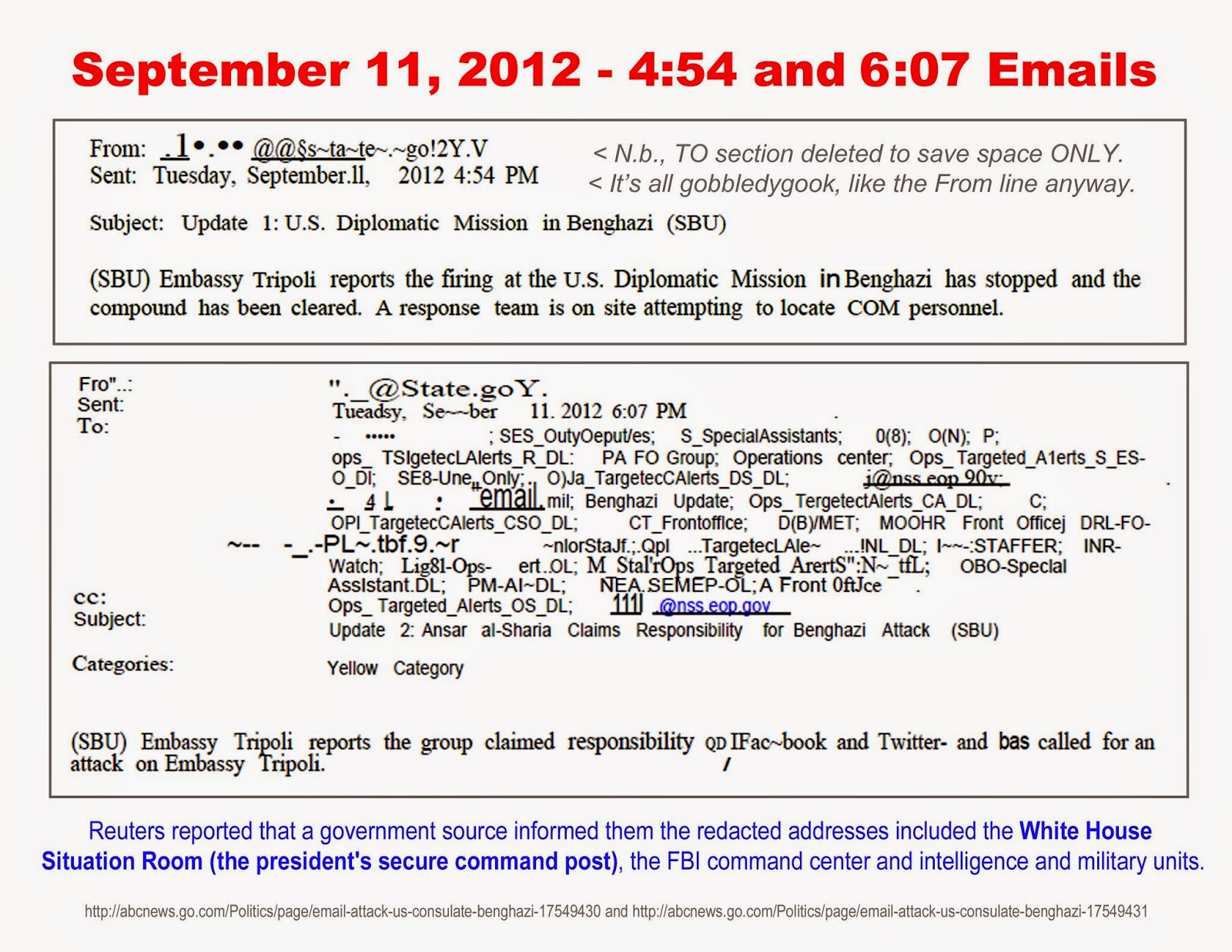 "The point is we should have tried."..."As another saying goes - always move to the sound of the guns."
- Retired Brig. Gen. Robert Lovell speaking yesterday before the House Oversight and Government Reform Committee about awaiting orders to go into Libya...orders that NEVER came.

As the next round of Darryl Issa's hearings on Benghazi began and seven months after Senator Ted Cruz called for an independent joint select committee to investigate the attacks at Benghazi...the very select committee that House Speaker John Boehner keeps saying NO to...the in the pocket of Obama media must be besides itself as they now have to cook up even more nonsense for us to focus on as they try to divert and deflect attention off the corrupt and traitorous Obama Administration yet again. And a diversion is needed now more than ever especially after documents were released last Friday to Judicial Watch...a Conservative watchdog group...released as result of a June 2013, Freedom of Information Act lawsuit filed against the State Department. This release allowed access to more than 100 pages of documents and what was discovered must have Obama very nervous...very nervous indeed.

And these now publicly released e-mails show a direct White House link to covering-up the truth about Benghazi via their revealing that after the attacks the top priority of the Obama administration was to concoct a story...build a LIE...to cover the truth about Obama's involvement in Benghazi...to cover the fact that his aide, Ben Rhodes, helped in that cover-up by communicated directly with then U.N. Ambassador Susan Rice and helping her prepare for her appearances on the Sunday talk show circuit. In fact, the e-mails show Rice was, “to convey that the United States is doing everything that we can to protect our people and facilities abroad; [and] to underscore that these protests are rooted in an Internet video, not a broader failure of policy.”

In other words, our embassy is attacked and four Americans are murdered but to Barack HUSSEIN Obama and his minions our national security be damned... conducting a NO holds barred investigation into the attack be damned...and the deaths of four Americans be damned...as none of these were part of the equation for reaching the all-important goal...a goal that trumped all else...a goal to make Barack HUSSEIN Obama “look good” against Mitt Romney in the upcoming foreign policy debate leading up to the 2012 Presidential Election.  And this manipulation of the truth was needed because if you remember Obama kept repeating ad-nauseum in the months leading up to the election that "Osama bin-Laden is dead, GM is alive, al-Qaeda is on the run."

Running a campaign leaning heavily on foreign policy issues because the economy, in a word, stunk, Obama needed foreign policy successes to win against a man who had NO foreign policy experience to speak of but who was strong on economic issues, so his calling card became that he killed Osama bin-Laden and that al-Qaeda was on the run. Well Benghazi proved it was NOT and so damage control was needed...and enter center stage a group of traitors unlike any America has seen since the likes of Benedict Arnold...Barack HUSSEIN Obama, Hillary Clinton, Ben Rhodes, Susan Rice, Jay Carney (who knowingly perpetrated the lie), and so many others connected to this administration...so many others complicit in the LIES about Benghazi.

And now with these incriminating e-mails surfacing...e-mails that were originally redacted when the documents were first asked for and only gotten by a court order...the made-up fable of Benghazi has been blown straight to hell. In fact, an e-mail from Ben Rhodes, one of Obama's assistants and National Security Adviser for Strategic Communications, shows that since the night the attacks occurred one of the Obama administration’s primary communications goals was NOT to get to the truth about what happened that fateful night but was “To reinforce the President and Administration’s strength and steadiness in dealing with difficult challenges.”

And in order to pull that rhetoric off a cover-up was constructed that included taking a poorly-made but somewhat widely viewed YouTube video called 'The Innocence of Muslims' and bring it front and center as the cause of the violence...after all its well-known that anything that upsets a muslim's sensibilities brings them to violent responses.  And once that foundation was laid the stage was set for the final part of the plan, and that was to get the American public to buy their story...to buy their LIE. And how did Obama and crew do that...by listed goals for Susan Rice to use in explaining the Benghazi attack and getting her to voluntarily agree to repeatedly LIE to both the families of Christopher Stevens, Sean Smith, Tyrone Woods, and Glen Doherty, and to the American people as well during her rounds on the talk show circuit. 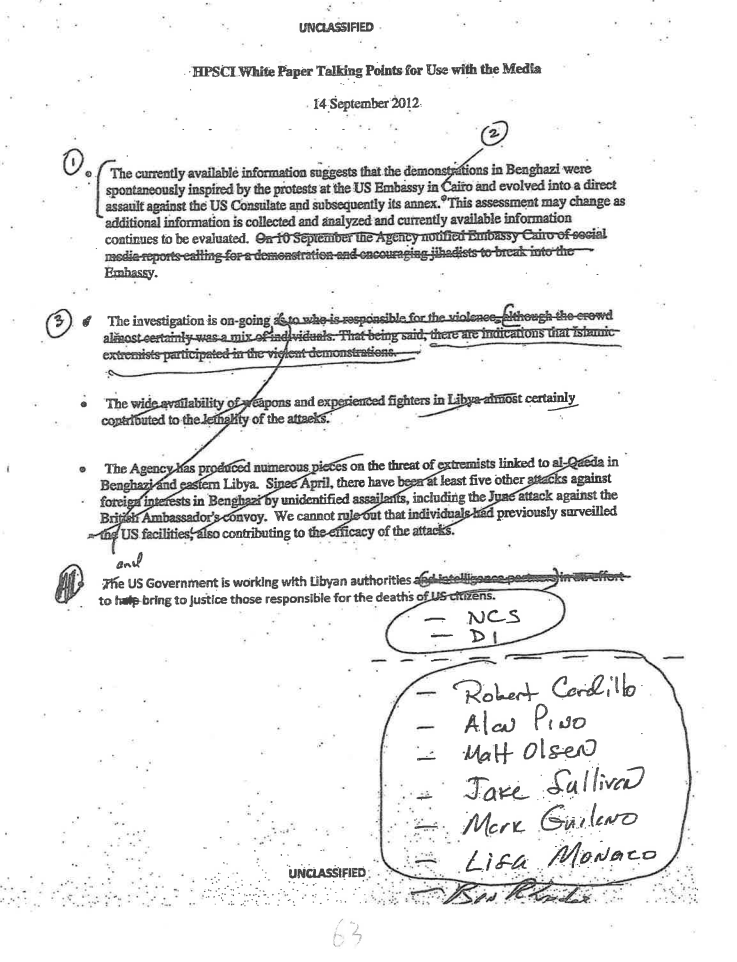 Following the pre-planned script...a script changed many times...where she was told what to say and how to say it, Rice spewed over and over the LIE that “Our current best assessment, based on the information that we have at present, is that, in fact, what this began as, it was a spontaneous — not a premeditated — response to what had transpired in Cairo." And by doing what she did, Susan Rice has now become as guilty as the rest of them for she knowingly colluded with those perpetrating  a LIE to cover for what we (I believe) know to be Obama's gun and weapons running operation to the al-Qaeda (our enemy) backed Syrian rebels.
And this e-mail was NOT just sent to Susan Rice but was also sent to a dozen other members of Obama's top advisors and assistants and was titled: “RE: PREP Call with Susan: Saturday at 4:00 pm ET”.  In fact, Rhodes sent this email to top White House officials such as David Plouffe and Jay Carney just a day before Susan Rice made her infamous round of the Sunday talk shows to discuss...to LIE...about the attacks at Benghazi.

And another e-mail to Payton Knopf, the former deputy spokesman at the U.S. Mission to the U(seless) N(ations) also showed that senior officials had already said the Benghazi attack was “complex” and planned in advance, yet Rice stayed on script repeating over and over the concocted LIE that the attack at Benghazi was “spontaneous.”
So with these e-mails it's now been proven what we long have suspected...the man aiding and abetting the enemy...the man sitting in the White House... deliberately blamed an innocuous YouTube video for terrorist attacks on our people at our Benghazi consulate. This man...Barack HUSSEIN Obama... directly provided a fabricated cover story to deflect blame off the jihadi bast*rds who murdered our people...to deflect blame off his muslim brethren. In other words, these e-mails prove beyond a shadow of a doubt that NOT only did Barack HUSSEIN Obama know that NO YouTube video was involved in the Benghazi attacks but that he also knew of or actually helped to orchestrate the ruse to try and cover his own involvement in Benghazi. 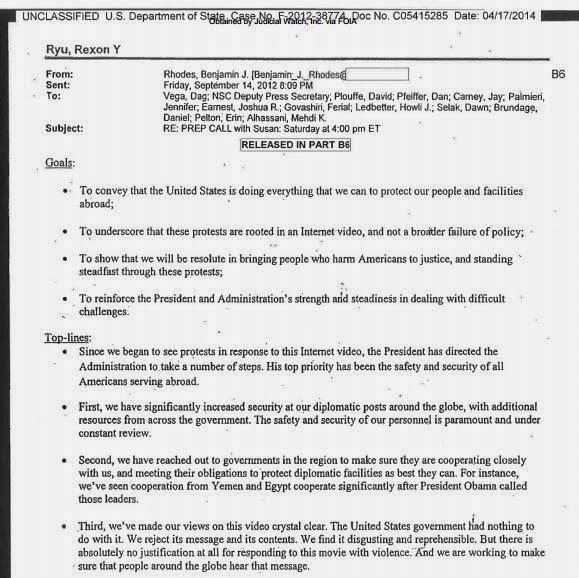 So what should happen now...any and all witnesses with any knowledge of the attack including administration officials...including the traitor-in-chief himself... must be called to testify before the Boehner so NOT wanted independent joint select committee so we can once and for all know the truth about what happened that fateful night. And Boehner, I believe, is indeed involved in the cover-up...see my RIGHT SIDE PATRIOT radio partner Craig Andresen's and my Benghazi expose in either my blog, The Patriot Factor, http://thepatriotfactor.blogspot.com/or in Craig's blog, The National Patriot, http://www.thenationalpatriot.com/

I have said since day one that Benghazi will be proven to be Obama's Achilles heel and these e-mails do just that as the cover-up they expose leads right to the desk of the Oval Office. And NO matter how the White House and the media tries to spin these developments...NO matter how they try to make excuses for what went down both on that fateful night and in its aftermath...the only rightful thing to do now is call for the immediate arrest of Barack HUSSEIN Obama on the grounds of treason for aiding and abetting the enemy and for his complicity in the murders of Christopher Stevens, Sean Smith, Tyrone Woods, and Glen Doherty.

GITMO beckons while Barack HUSSEIN Obama awaits the final decree for those found guilty of treason...just saying.
Posted by Diane Sori at 12:04 AM