A “Human Right” to Other People’s Money

One of the many differences between advocates of freedom and supporters of statism is how they view “rights.”

Libertarians, along with many conservatives, believe in the right to be left alone and not molested by government. This is sometimes referred to in the literature as “negative liberty,” which is just another way of saying “the absence of coercive constraint on the individual.”

Statists, by contrast, believe in “positive liberty.” This means that you have a “right” to things that the government will give you (as explained here by America’s second-worst President). Which means, of course, that the government has an obligation to take things from somebody else.

How else, after all, will the government satisfy your supposed right to a job, education, healthcare, housing, etc.

Sometimes, the statists become very creative in their definition of rights.
You may laugh at these examples, particularly the ones that focus on seemingly trivial issues.

But don’t laugh too hard, because our friends on the left are busy with very grandiose plans for more “positive liberty.”

The EU Observer reports on efforts in Europe to create expanded rights to other people’s money.


Austerity programmes agreed with the troika of international lenders (the European Commission, European Central Bank and International Monetary Fund) are in breach of the EU’s Charter of Fundamental Rights, according to a German legal expert. …under the EU charter of fundamental rights, a legal text which became binding for member states in 2009, several austerity measures enshrined in the MoUs can be fought in courts.

…His study highlights that the MoUs “have seriously limited the autonomy of employers and trade unions to negotiate wages.”

…Education and health care reforms prescribed in the memorandums are also questionable because they are focusing too much on cutting budgets, he said.

But it’s not just one oddball academic making these claims.


…the Council of Europe’s social rights committee noted that public policies since 2009 have been unable to stem a generalised increase in poverty on the continent. The committee identified some 180 violations of European Social Charter provisions on access to health and social protection across 38 European countries. In the bailed-out countries, the committee found several breaches – particularly in terms of wages and social benefits. Ireland was found in breach of the social charter for not ensuring the minimum levels of sickness, unemployment, survivor’s, employment injury and invalidity benefits. Greece and Cyprus have “inadequate” minimum unemployment, sickness, maternity and old age benefits, as well as a restrictive social security system. Spain also pays too little to workers on sick leave.

This crazy thinking also exists in the United States. A former Carter Administration official, now a law professor at Georgetown, has written thatcountries with good policy must change their systems in order to enable more tax revenue in nations with bad policy.

And the right to redistribution isn’t just part of the U.N. mission.

There’s also a European set of Maastricht Principles which supposedly obligates nations to help each expand the burden of government.


Articles 19 and 20 of The Maastricht Principles call on states to “refrain from conduct which nullifies or impairs the enjoyment and exercise of economic . . . rights of persons outside their territories . . . or which impairs the ability of another State to comply with that State’s . . . obligations as regards economic rights.” …recognizing the fact that secrecy for offshore accounts makes it difficult for developing countries to implement Covenant obligations. It therefore seems indisputable that offshore accounts impede the fulfillment of internationally recognized human rights.

You may be thinking that all this sounds crazy. And you’re right.

You may be thinking that it’s insane to push global schemes for bigger government at the very point when the welfare state is collapsing. And you’re right.

You may be thinking that it’s absurd to trample national sovereignty in pursuit of bad policy. And you’re right. 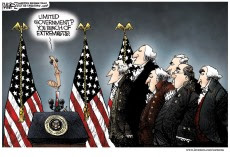 And you may be thinking this is a complete bastardization of what America’s Founding Fathers had in mind. And you’re right.

But you probably don’t understand that this already is happening. The IRS’s awful FATCA legislation, for instance, is basically designed for exactly the purpose of coercing other nations into enforcing bad American tax policy.

Even more worrisome is the OECD’s Orwellian Multilateral Convention on Mutual Administrative Assistance in Tax Matters, which is best viewed as a poisonous acorn that will grow into a deadly World Tax Organization oak tree.

P.S. And the Obama Administration already is pushing policies to satisfy the OECD’s statist regime. The IRS recently pushed through a regulation that says American banks have to put foreign tax law above U.S. tax law.

P.P.S. Statists may be evil, but they’re not stupid. They understand that tax havens and tax competition are a threat to big government.
Posted by Diane Sori at 8:56 AM