It’s been a truism for as long as I’ve been alive that Washington, DC is out of touch with the lives of the rest of us who don’t live in New York or Los Angeles.

Unfortunately, it’s never been as more true either.

And it has had great consequences for the rest of the country.

When you spend more than half of your private sector output on government, then unfortunately, as the government goes, so goes the rest of the country.

The government believes that the policy of taking income from you to give to the government is addition by subtraction.

I say it’s the cutting edge of the disconnect between the “us” that just wants to live our lives and the “them” who uses our lives as punctuation in their fictionalized tome that can generically be called My Struggle Against Lies, Stupidity and Cowardice.

You see, there is a Great Disconnect in this country.

There’s a disconnect between earnings and GDP, the stock market and wages, housing and homeownership, doctors and patients, blacks and whites, students and parents, men and women, common sense and ideology.

And yes, some of that tension has always existed, but this is the first time in my lifetime that the government has set about deliberately to exacerbate those tensions.

Expect the disconnect to continue.

Since the official numbers for GDP have indicated an economy performing better than it has in recent memory, the market has reversed course and moved down, as seen in the three month chart below. 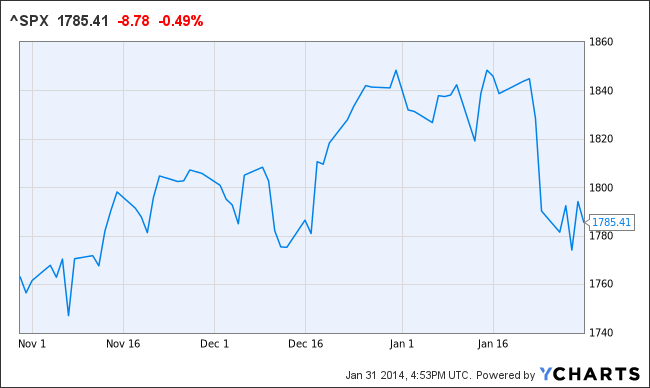 Financing is still hard to come by for Main Street, and in another case of disconnection, financial services companies lead the S&P 500 in earnings growth.

“Total earnings for the Finance sector are expected to be up +25.3%,” Zacks analyst, Sheraz Mian writes. “Excluding Finance, total earnings growth for the S&P 500 drops to +6.4%.”

This goes along with the strange, disconnected numbers we are seeing in the job market.

According to a recent estimate from the union run Economic Policy Institute (EPI) the numbers of missing worker has grown to 5.9 million people. It’s worth noting that only 1,374,000 jobs have been created since Dec 2012, while an additional 1,500,000 workers have left the workforce according to the EPI estimate.

5.9 million workers would imply a population of around 9.4 million people or a state the size of New Jersey, North Carolina or Michigan. These states have GDPs of between $350 billion and $500 billion. If the trend just stops now, we’ll only loose between $1.7 trillion and $2.5 trillion in GDP over the next five years.

Yet the Great Dividers cry about a $24 billion hit to GDP because of a government shutdown. That’s only one percent of the GDP that we’ll be missing in the next five years due to plunging labor force numbers.

It’s so bad that many people believe the government is deliberately ruining the economy.

“They can’t be this stupid,” it’s said. “This must be a deliberate plan.”

Unfortunately, I wish that were true.

Certainly the plan to divide us is deliberate.

It’s about the only thing they seem to know how to do well.

But as the Obamacare debacle clearly shows, these guys couldn’t manage their way out of a wet paper bag even if equipped with razor blades.

Which gives me a really good idea.

Does anyone know where I can get a humongous paper bag?
Posted by Diane Sori at 10:23 AM