In Canada today, helping Muslim girls is “racist.” Edmonton Transit last year caved in to Islamic supremacist demands and took down bus ads sponsored by my organization, the American Freedom Defense Initiative (AFDI), offering help to Muslim girls who were living in fear of honor killing. But we are fighting back. We’ve initiated a court action to defend free speech – which is supposed to be protected by the Canadian Charter of Rights and Freedoms.

Nowadays it seems increasingly in both the U.S. and Canada that free speech is only allowed to those whose positions are popular. But the whole purpose of free speech, the foundation of any free society, is to protect people who tell unpopular but necessary truths. If any group has the power to censor messages it doesn’t like, society is no longer free.

City of Edmonton sued for pulling 'honour killing' bus ad
Globalnews.ca-by Erika Tucker-Jul 7, 2014
AFDI's Pamela Geller said that help could come in the form of access to a support system of former Muslims or Muslims who've experienced the same problems, ...

The Canadian media certainly hate our message of hope and freedom. The media in Canada called our ads “dishonorable,” “controversial,” and, above all, “racist.” It’s “dishonorable” and “controversial” and “racist” to save lives? Under the Sharia, yes, it is. And so in Edmonton, Sikh Councillor Amarjeet Sohi, who should know better than to carry water for the Islamic supremacists who oppressed his people for centuries, ordered officials to take down our ads immediately. They complied – even though vicious blood libels against Israel are just fine and have run on transit systems across Canada.

Apparently Muslims complained about our ads. Why? Is this how the Canadian Muslim community responds to the desperate circumstances of Muslim girls living in devout Muslim homes? They deny, obfuscate, and dissemble. The Muslim community protects the idea of honor in Islam, while smearing and libeling as “racists” the truth tellers coming to the aid of these girls. 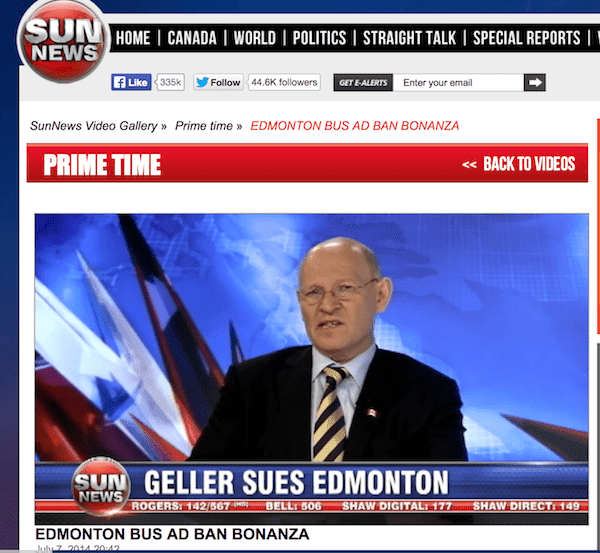 Honor killing is a grim reality that is largely ignored, and girls are suffering as a result. In Canada in 2007, 16-year-old Aqsa Parvez was strangled to death by her father and brother for refusing to wear hijab. And two years later, Mohammad Shafia murdered his first wife and three daughters in an another honor killing. Our ad depicted “Muslim Girls Honor Killed By Their Families,” with photos of Aqsa and six other honor killing victims. It read: “Is your family threatening you? Is there a fatwa on your head? We can help: go to FightforFreedom.us.”

In cases of honors killings, Muslim fathers kill their daughters for real or imagined sexual indiscretions that have supposedly dishonored the family. Nothing is done because political correctness prevents us from speaking about the problem honestly. Muslims commit 91 percent of honor killings worldwide, and Islamic law stipulates no penalty for a parent who kills his child.

Honor violence, honor murder, is not just a tribal custom; it’s Islamic law. A manual of Islamic law certified as a reliable guide to Sunni orthodoxy by Al-Azhar University, the most respected authority in Sunni Islam, says that “retaliation is obligatory against anyone who kills a human being purely intentionally and without right.” However, “not subject to retaliation” is “a father or mother (or their fathers or mothers) for killing their offspring, or offspring’s offspring” (‘Umdat al-Salik o1.1-2). This is effectively saying that a Muslim father who kills his child for “honor” faces no legal penalty under Islamic law.

Girls threatened with honor killing need and deserve protection. The horror of honor killings is given the imprimatur of the West by the enemedia’s complicit silence and the government’s unwillingness to say a critical word about Sharia, no matter how savagely it is applied anywhere in the world. The media goes to extraordinary lengths to whitewash these crimes and disconnect the Islamic motive from these murders. The “feminists” look away and pretend that it is outside the realm of women’s rights. They are shills for Islam. Shame on all of you for failing women, children, and girls worldwide.

We are not giving up. We are challenging their decision in Edmonton and will run the ads elsewhere in Canada. The fact that Islamic supremacist groups are so threatened by these ads shows how desperately they are needed. Clearly we struck a nerve; these Muslim groups don’t want people speaking out against honor killing, so we have to speak out louder than ever.

Please help us. We have to make a stand.

Please donate via PayPal.
The American Freedom Defense Initiative is a 501c3 organization, and your contribution is tax deductible.

We can’t do it without your help. Remember: what happens in Canada will soon enough happen in the U.S. Canada is just farther down the same road we are on, the road of appeasement and capitulation to Islamic supremacists.
Posted by Diane Sori at 1:13 AM