In Bare Feet
By: Diane Sori / The Patriot Factor / Right Side Patriots on www.americanpbn.com 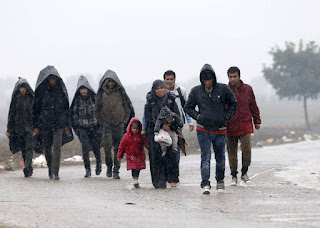 This photo was sent to me by a friend and it is quite apropos right now as Obama wants to bring into our country by the year 2017, 200,000 unvetted Middle East 'so-called' refugees including 10,000 from ISIS controlled areas of Syria. Obama expects us to welcome them with open arms and to aid them in assimilating into our society. But folks, that cannot happen as their ingrained mindset is so very different than ours.

Take a look at this photo closely...a photo of 7 men, 3 children, and one lone woman. Notice how warm the men are in their jackets and shoes, then notice the woman in just a burka and BARE feet as they trod through the snow on their way to Europe. Now notice that NOT one of the men is helping her as she is weighed down by the confining burka as well as by her carrying two of the 3 children as she trudges forward in her BARE feet.


A pack mule she is...a beast of burden...a slave...as are all women in islamic culture. This is the sort Obama wants to bring here...this is the sort Obama thinks will become a piece of the fabric of our American society and who will respect, honor, and abide by our customs, traditions, and morals.

Now I ask how do you undo generations...centuries...a millennium...of indoctrination...of programming...simply you cannot...nor should it be our job to do so. If there is change to come it must come from within islam itself...a reformation of sorts...and it needs to be done OVER THERE...NOT over here. It is NOT our job to reform others...it is their job to reform themselves.

And as for Obama...if he thinks these people belong here...or that we will allow it...he's got another thing coming for 'We the People' have said loud and clear that what's happening in Europe will NOT happen here...and finally Congress is doing something right by working on bills to stop him...and his executive orders be damned.
Posted by Diane Sori at 3:01 PM