NO DEAL: President Trump abruptly walked away from negotiations with North Korean leader Kim Jong Un in Vietnam with no deal and headed back to Washington, saying the U.S. is unwilling to meet Kim's' demand of lifting all sanctions on the rogue regime without first securing its meaningful commitment to denuclearization ... Trump, speaking in Hanoi, said the U.S. asked Kim to do more regarding his intentions to denuclearize and “he was unprepared to do that.” “Sometimes you have to walk,” Trump said.

Trump said the summit fell through after the North demanded a full removal of U.S.-led international sanctions in exchange for the shuttering of the North's Yongbyon nuclear facility. Trump and Secretary of State Mike Pompeo told reporters that the U.S. wasn't willing to make a deal without the North committing to giving up its secretive nuclear facilities outside Yongbyon as well as its missile and warheads program. The president told reporters that Kim promised he would not resume nuclear and missile testing and Trump said he was taking Kim’s word for it.

CLICK HERE TO GET THE FOX NEWS APP
CONVICTED LIAR COHEN: TRUMP IS A RACIST, CON MAN AND A CHEAT - Michael Cohen, the former fixer about to begin a three-year prison term, denounced President Trump during an explosive congressional hearing Wednesday with a series of allegations, calling his former boss a racist, testifying he was aware of adviser Roger Stone's talks with WikiLeaks about stolen Democratic emails during the 2016 campaign and alleging he oversaw an array of illicit schemes during the 10 years they worked together ... "He is a racist. He is a conman. And he is a cheat," Cohen testified. Still, Trump's former personal lawyer stopped short of saying he had evidence that Trump's presidential campaign colluded with Russia in 2016, asserting he had only “suspicions."
Republicans on the House Oversight Committee repeatedly poked holes in Cohen's credibility, pointing out that he has been convicted for lying to Congress and suggesting he turned against Trump only after not landing a White House job. Cohen is set to testify in private before the House Intelligence Committee on Thursday. He is scheduled to report to prison May 6 to start serving a three-year sentence for campaign finance and other violations. 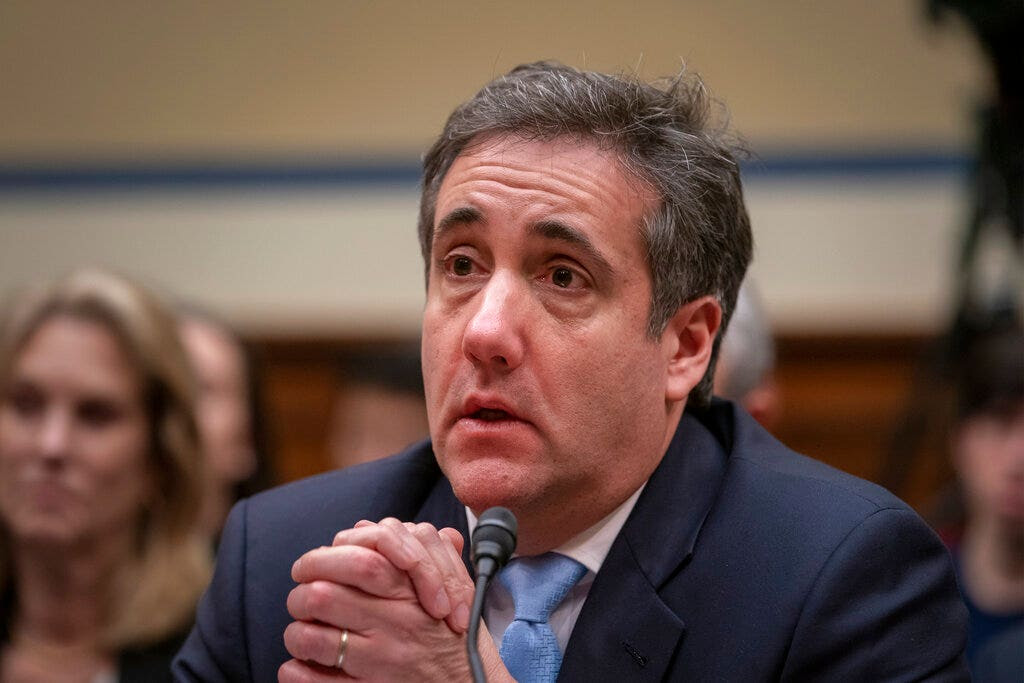 'IMPRESSED' TRUMP SLAMS 'FAKE' COHEN HEARING: President Trump, speaking at a news conference in Vietnam after his summit with Kim Jong Un ended early, said he was a "little impressed" that Michael Cohen told Congress there was "no collusion" between his presidential campaign and Russia ... Trump said Cohen lied so much during the hearing that he was a bit surprised that he did not lie about Russian collusion allegations. "He decided to give 95 percent effort instead of 100 percent," Trump said. The president slammed the hearing as "fake" and said it was a "terrible thing" for Democrats to hold it during the summit. "No American president should ever have to go through this," he said. "It's a terrible thing for the country."
BETO'S BIG DECISION: Former Texas Rep. Beto O'Rourke said Wednesday that he has made up his mind about his political future, raising expectations that he will be the latest Democrat to jump into the crowded race for the party's 2020 presidential nomination ... "[Wife] Amy and I have made a decision about how we can best serve our country," the 46-year-old O'Rourke said in a statement. "We are excited to share it with everyone soon." The statement was first obtained by the Dallas Morning News, which reported that O'Rourke would not pursue a potential challenge to Sen. John Cornyn, the No. 2 Republican in Congress' upper chamber.
PETA WANTS AOC TO MAKE A 'VEGAN GREEN NEW DEAL': The animal rights group People for the Ethical Treatment of Animals (PETA) has sent a letter to Rep. Alexandria Ocasio-Cortez, D-N.Y., praising her push for a Green New Deal and asking the congresswoman to promote more vegan food policies ... The activist group made its case to Ocasio-Cortez to help it “reclaim the Earth.” It wants to limit the country’s dependence on an animal food supply to help curb greenhouse emissions and provide Americans with what the group called “healthful eating.” “Because animal agriculture not only is devastating to animals but also poisons the environment and makes Americans sick, what we need is a Vegan Green New Deal,” PETA President Ingrid Newkirk said in a statement.