'Threshold question is whether or not you're eligible'

by Bob Unruh / WND
are11
Dr. Jerome Corsi, author of the best-selling “Where’s the Birth Certificate? The Case That Barack Obama is Not Eligible to be President,” is scheduled to appear tomorrow on former N.Y. Gov. David Paterson’s WOR New York radio program to talk about the importance of the Constitution. 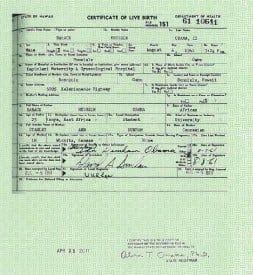 The invitation for Corsi to appear came after Paterson stirred up a hornet’s nest by suggesting Barack Obama could be ineligible for the Oval Office and “got away” with it.

Paterson also compared Obama’s actions to those of Richard Nixon, which he likened to treason.

On his show, he was asserting, along with NBC Chief White House Correspondent Chuck Todd, that GOP presidential candidate Mitt Romney should have distanced himself more from developer Donald Trump and his doubts about Obama’s eligibility.

“Even if he wasn’t born in the United States at this point,” Paterson said. “It’s kind of like he got away with it.”

He continued, “A lot of people get away with a lot of things.”

Paterson compared Obama’s actions to those of President Richard Nixon.

“We learned later that Nixon spied on Johnson’s Paris peace talks,” Paterson said. “That was actually an act of … uh … I mean it was against the interests of the U.S. government. You’ve got to say that before you would say it’s treason. But he got away with it. Decided it wasn’t a good thing to bring up at that particular time. Not only did he get away with it, he won the election.”

Corsi told WND he had agreed to be on the Paterson show to discuss the issue, which he defined very succinctly as being the Constitution itself.

“The threshold question [over the Obama issue] is whether or not you’re eligible,” Corsi told WND. “The rest is irrelevant.”

The Paterson comments have been posted online by WOR.

The focal point of the dispute over Obama’s tenure in the White House has been whether he meets the Constitution’s requirement of being a “natural born citizen.” That’s not defined in the Constitution, but most likely was considered by those who wrote it to mean the offspring of two of the nation’s citizens.

That interpretation would mean he never was eligible to be president, because his father, Barack Obama Sr., never was a citizen of the United States. The questions revolve around his birth location because he has claimed his birth in Hawaii gives him that status.

Obama repeatedly has refused to release a long list of documents that likely would shed like on the controversy, which heated up two weeks ago when Breitbart.com released a 1990s publicity brochure from a publishing house advertising Obama as an author.

In that, it plainly stated that Obama was born in Kenya.

The issue also has been shoved back into the headlines this week by multiple comments from billionaire Donald Trump, who earlier in the week blasted CNN for not reporting on the issue more accurately.

The businessman told lead political anchor Wolf Blitzer the network would improve its dismal viewer ratings if it would only report the issue of Obama’s eligibility to be president “accurately.”

“Obama does not like the issue of where he was born,” he told Blitzer in the interview.

“There’s something that bothers Obama very much. I will tell you: It’s not an issue that he likes talking about, so what he does is use reverse psychology on people like you. … He does not like that issue because it’s hitting very close to home. You know it, and he knows it – but you don’t report it accurately.”

The heated exchange between Blitzer and Trump can be seen here.

Many media commentators believe Trump’s comments have put Romney in an awkward position. Romney has said he believes Obama was born in the U.S., but Democrats have criticized him for not distancing himself from Trump.

“If Mitt Romney lacks the backbone to stand up to a charlatan like Donald Trump because he’s so concerned about lining his campaign’s pockets,” the Obama campaign said, “what does that say about the kind of president he would be?”

Romney has refused to condemn Trump, saying, “You know, I don’t agree with all the people who support me. My guess is they don’t agree with everything I believe in. But I need to get 50.1 percent or more and I’m appreciative to have the help of a lot of good people.”

For more than a year, Trump has consistently maintained he has doubts the Obama birth certificate released by the White House is genuine.

As WND reported in March 2011, Trump said Obama’s presidency could be “illegal” if legitimate proof is not provided demonstrating he is indeed a “natural born citizen” of the U.S.

Trump also wondered why no doctors or nurses have come forward to announce their presence at Obama’s birth.

In March and April of 2011, Trump staged a weeks-long public campaign questioning Obama’s eligibility to be president, rising to the top of the pool of potential candidates for the 2012 GOP nomination as a result.

“I always said I wanted to know if it was real,” Trump told WND senior reporter Corsi.

During their conversation, Trump told Corsi his own computer expert told him that the image posted online was a computer-generated document.

Then, in March, the famous billionaire heaped praise on Sheriff Joe Arpaio for the Arizona lawman’s probe into the authenticity of Obama’s purported birth certificate and his eligibility for office.

Having printed out an Associated Press report of the event that featured a photograph of Arpaio, Trump penned diagonally in the upper left hand corner, “Joe – Great going – You are the only one with the ‘guts’ to do this – Keep up the good fight – Donald Trump.”

Corsi also told WND an intelligence source in Hawaii who warned early last year that a forged Obama birth record would be released also is reporting a forged “original” birth certificate intended to pass forensic inspection by using 1961 materials is being prepared and could be released as an “October surprise.”

The source, who has contact with Hawaii government officials, was questioned by Mike Zullo, the head of Maricopa County Sheriff Joe Arpaio’s Cold Case Posse team. Zullo recently returned from a trip to Hawaii to follow up on leads in the posse’s investigation of Obama’s eligibility for the 2012 election ballot in Arizona.

Arpaio announced March 1 that his team found probable cause that the document posted by the White House April 27, 2011, is a forgery.

Zullo told WND that regardless of whether the Hawaii source’s information pans out, he wants to see the original microfilm record of Obama’s birth.

“If they decide to try to produce a document, we’re going to be skeptical,” he said. “We’ve been calling for the microfilm from the beginning.”

The Hawaii source said ink and paper from 1961 have been secured to create an “original” document that would correspond with the digital copy posted on the White House website.

As WND reported one year ago, radical supporters of Obama have openly admitted their role in the forging of a Kenyan Obama birth certificate.
Posted by Diane Sori at 11:19 AM