What our media didn’t report about the woman on the U.S. Airways flight who claimed to have an implanted device in her stomach 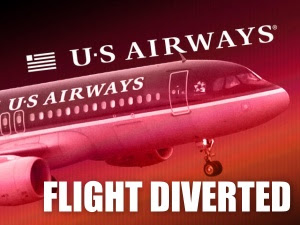 The UK Daily Mail is reporting that passengers on the US Airways flight out of Paris had to wrestle the crazed woman to the floor after she claimed to have a bomb surgically implanted inside her. And why aren’t they releasing the name of the woman who immigrated to France from Cameroon where there is a significant Muslim population?

UK DAILY MAIL  The terrifying incident forced the pilot of U.S. Airways flight 787, traveling from Paris to Charlotte, North Carolina, to divert and make an emergency landing. Fighter jets were scrambled to intercept the the troubled plane and guided it into land at a Maine airport, where passengers were evacuated and the woman arrested.

In video footage below, passengers can be seen wrestling with the woman following her potentially fatal claim, initially made in a note to cabin crew.

AFP  Coming on the heels of a thwarted airline bomb plot by Al-Qaeda’s Yemen  branch, the incident has laid bare US worry over shifting tactics of extremists  as they seek new ways — and new technologies, including non-metallic bombs —  for landing a deadly blow against an American target.

Last year, US officials warned airlines that terror groups were studying  how to surgically hide bombs inside humans to evade airport security —  precisely the threat that emerged when the US Airways passenger made herself  known to the cabin crew.

The Cameroon-born woman was traveling alone with no checked baggage and  visiting the United States for 10 days. 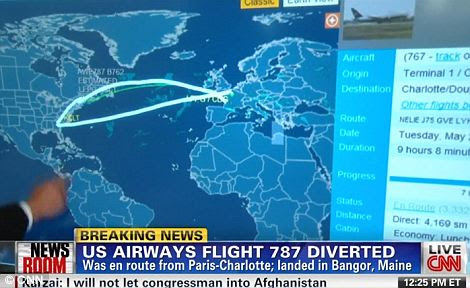 “At this time, there is no indication the plane or its passengers were ever  in any actual danger.”    A US official told AFP that the suspect was unlikely to be part of a  broader international terror plot linked to groups such as Al-Qaeda. (Isn’t that what they always say?)  But it served as a blunt reminder of the ongoing efforts by groups like  Al-Qaeda in the Arabian Peninsula (AQAP) to eventually break through tight US  security with a functional bomb. And it came after news emerged earlier this month of a foiled plot to blow  up a US-bound airliner.