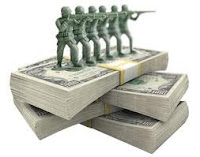 That is for any president whose loyalty is to the oath he took and NOT one who just mouthed the words for a photo-op.

As the United States still faces major threats with terrorism and the rise of radical islam, cutting our defense budget would be devastating to both the military and the safety of this country.  And while Sen. John McCain has gotten it wrong on a lot of things lately on this he is right on, saying cutting our defense budget "would jeopardize our national security...and, literally, our ability to defend the nation.”

How right he is especially as Barack HUSSEIN Obama wants to cut the Defense Department's 10-year budget by about $500 billion, and if the dreaded sequestration stays in effect (the mechanism in the Budget Control Act that would trigger across-the-board defense spending cuts over the next decade), by the end of this very decade about one-third of the Obama budget cuts will be gotten solely by reducing the size of the US military force...NOT good...NOT good at all.  Reduce our military size and presence in 'hot spots' overseas means reducing our ability to keep us safe at home...as in it's better to fight the enemy over there than here on American soil.

And here's something that should send up red flags en-mass, that is that most of those cuts encompass something extremely critical...that being readiness, as in our military being prepared for action in a short period of time.  By reducing readiness you are NOT only reducing the training of US forces for later-deploying Army and Marine Corps units to Afghanistan, but also are reducing the readiness of other units if other conflicts arise down the road, which we know will be the case.  And cutting readiness also means less maintenance funds for 'war-fighting equipment' that need to be operational in what could be an immediate, like in a right now, period of time.

For example, here is a bit of the impact those cuts would have on the Navy...cuts will mean less dollars for training and maintenance, meaning it would take longer to prepare crews to deploy.  Also, fewer ships would be deployed to fewer places, and those sent out would spend a longer time at sea with fewer port calls to boost morale.  And deployments to South America and the Caribbean will end and those to Europe will be limited. NOT good with Chavez and his ilk in South America and the rise of muslim populations in Europe.

And this is a big one...aircraft carrier presence in the Persian Gulf will be cut from two carriers to one...again NOT good NOT good at all...for in this day and age of islamic terrorists and whack jobs like Ahmadinejad close to developing a nuke, cutting our warship presence in that region can have devastating consequences NOT only for the safety of our troops and bases but for Israel as well.

But hey, that's what Obama wants.

As for the Air Force, cuts in operations at various missile defense radar sites would be made, as in cutting operations down to eight hours from the now 24 hours.  The ramifications of that are just mind-boggling as our missile defense sites are our first line of defense.  In other words, this cut alone will leave the United States of America open to possible foreign attacks.

And the Army said it would cancel training center rotations for four brigades and cancel repairs for thousands of vehicles, radios and weapons.  Just great, send our people into war with broken and/or malfunction equipment...now that's a pathway to slaughter.

But again, that's what Obama wants...better our troops get killed than his muslim brethren.

And with all this let's NOT forget how the defense budget cuts will affect the economy as it will hit the military civilian workforce (about 700,900 full-time employees) with furloughs...as in NO pay, and we all know what NO pay means.  And it also will affect our peacetime army who will have to reduce its peacetime operations.  For example, the number of flight hours that pilots get for regular training and the number of live-fire exercises for ground forces will be reduced as well as deferment of equipment maintenance.

Our troops will also see reductions in base support services, facility and government-owned family housing maintenance, and commissary hours.  Tricare health coverage will be affected, with delayed payments to medical service providers. That means providers could deny medical services to some vets and their families.


Grrrrrr...let Barack HUSSERIN Obama cut all his freebie and handout programs for the 'sponges' of our society...leave our troops and their families alone!

And all these cuts, even minor ones, will most assuredly have an impact on our tried and true defense strategies as we will now have to struggle to maintain our military superiority over other nations...enemy nations...who are increasing their military budgets as they wait with baited breath for our military to be rendered impotent by a man who is NO friend to those who lay their lives on the line everyday to keep us safe and free at home.

As American patriots we cannot sit idly by and watch Barack HUSSEIN Obama and his minions destroy the American military...the greatest fighting force the world has ever known.  Call, write, e-mail, FAX, your Senator and Congressperson and tell them to say NO to cuts to our country's defense budget, for you never know when the enemy will bring the battle to American soil instead of us being able to keep it over there.