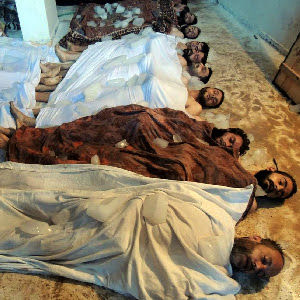 UPI
Syrian rebels claim hundreds of people were killed in a toxic gas attack by pro-government forces.
In 2003, then-Director of the National Geospatial-Intelligence Agency James Clapper told reporters that Saddam Hussein moved his stockpiles of chemical weapons to Syria in advance of the second Gulf war, calling it the “the obvious conclusion one draws.” Clapper’s assessment was echoed by a general with the Iraqi Air Force, Georges Sada, who noted as many as 56 flights and multiple truck convoys carted the weapons of mass destruction across the border. The pre-invasion WMD pipeline is further touted by Israeli intelligence, Syrian dissident accounts and even American satellite imagery.

Though there was no doubt Saddam had possessed and used chemical weapons (a fact to which the victims of Iraqi chemical attacks in both Kurdistan and Iran would doubtless testify were they not dead from chemical-weapons exposure), they had vanished from Iraq. Putting aside the hotly debated veracity of President George W. Bush’s infamous rationale as well as the eyewitness accounts of those few people who survived the aforementioned war crimes in Iraq and Iran, the question requires an answer: Where did Saddam’s stockpile of chemical weapons go?

Last week, the Syrian government of Bashar Assad decided to cross whatever line comes after the “red line” that President Barack Hussein Obama declared uncrossable more than a year ago. In a move that seemed only slightly less desperate than would one by the Comcast flack assigned to make MSNBC palatable to the viewers who avoid it like it causes brain cancer, Assad deployed chemical weapons — which he likely borrowed from his fellow Ba’athist wacko, who used to live next door — against his own people.

The body count from Assad’s chemical attack remains unclear, but the reaction was spectacular. By Sunday afternoon, sources were indicating the Obama Administration was preparing a naval strike package against Syrian government targets. By the time you read this, there may well be neighborhoods in Damascus that are even more depressingly miserable than they were before.

But how did the United States of Barack Obama find itself in such a predicament? I was under the impression that the election of Obama in 2008 permanently ended war, oppression and religious intolerance. I mean, they gave the guy the Nobel Peace Prize without a shred of collateral. I’m willing to admit that dealing with the Mideast at a diplomatic level would test the mettle of even a marginally competent statesman — something to which Obama can only aspire.

The Democrats spent most of the 2000s shrieking to the rafters about the warmongering failures of President George W. Bush. Some of their criticisms, although issued for the wrong reasons, were correct. Once it became apparent the WMDs were gone, the whole endeavor became a replay of Vietnam — only with much cooler action scenes and a lower number of wasted American lives. In Iraq, we whacked a homicidal islamofascist and replaced him with a group of homicidal islamofascists because the former was becoming increasingly troublesome and because he had used WMDs before.

Then, Obama got elected in no small way as a result of being one of the few candidates who could say they said “no” to the war. Well, Dennis Kucinich could say that, but he talks to space aliens. And I think Hillary Clinton still says it, but Clinton has always had kind of a weird relationship with reality. Darn it all, Bush had lied to America about WMDs; and any candidate who wasn’t either Obama or the spaceman from Ohio with the semi-hot wife was clearly in on the sham with Bush. We were done with war and done with using phantom WMDs to justify it.

Though he ended direct combat operations in Iraq, Obama replaced them with indirect and somewhat indiscriminate targeting of civilians in Yemen. And despite an apparent media blackout on the topic, combat operations in Afghanistan are still very much a going concern. We certainly remember the recent unpleasantness in Libya — although everyone in the Obama Administration short of the postmaster general lied about it, some of them under oath. I don’t know about the rest of you, but Obama’s idea of hope, change, peace and improving America’s standing in the eyes of the world seems oddly similar to Bush’s. The only real difference appears to be that Bush was more discerning about spying on his own people and was whole let less “droney” — at least over domestic soil.

Look, we can all have a big discussion about the merits of America’s self-assigned role as policeman to the world’s crappiest precincts. I happen to believe there is logic to neutralizing those who seek to do us harm before they can board Air Jihadistan for their flight to Allah’s secret grotto via Cairo; Tel Aviv, Israel; Berlin; Paris; Oslo, Norway; London; New York; Shanksville, Pa.; and wherever else all the hippest suicide bombers are pressing the “send” button on the hotline to the afterlife. I also happen to believe that not everyone who disagrees with me is necessarily enabling islamofascism like Al-Jazeera. But it’s worth noting that we spent nearly 10 years stomping on islamofascists in Iraq — and are still doing so in Afghanistan — over WMDs we knew existed and thought might have been moved to Syria. The guy who won the White House in 2008 and again in 2012 swore up and down that not only was he was going to deliver peace in our time, but he was going to make the world unite in harmony. (Calls to mind that old, cloying Coke jingle.)

In this late age of Obama, countries upon which we could generally count to not completely devolve into an ululating rendition of the Hatfields and McCoys have devolved into open warfare. The Egyptians — evidently not content with behaving like medieval Christians — are now targeting 21st century Christians. And now, we’re gearing up for war in Syria because some lunatic islamofascist used WMDs against a bunch of lunatic islamofascists. Scroll past the endless speeches about hope and change. Ignore the pronouncements by every Democrat from Central Park West to Malibu that Obama would be the most awesome thing short of the second coming, if not even cooler than that.

The Navy is preparing to engage in direct action against the homicidal islamofascist running Syria, presumably to replace him with a group of homicidal islamofascists, and all because he used WMDs, which Administration official Clapper says he got from Iraq. “It’s déjà vu all over again.”
Posted by Diane Sori at 12:52 PM