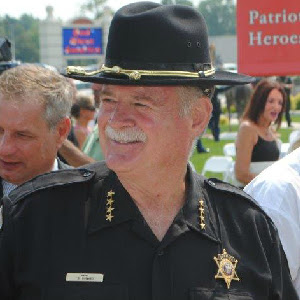 SPECIAL
Sheriff Tim Howard
Back in May, one county sheriff pledged not to enforce the New York Secure Ammunition and Firearms Enforcement (SAFE) Act, a bill that came early in the post-Newtown backlash of knee-jerk gun control legislation that swept through the Nation’s social progressivism outposts.

That sheriff, Tim Howard of Erie County, signed on to a lawsuit against the SAFE Act along with other New York sheriffs, and famously told The Buffalo News: “I won’t enforce it.”

Howard was up for re-election this year, and he faced two opponents in the general election in early November. But Howard’s stance on gun control resonated with Erie County voters. Here’s how The Buffalo News revisited Howard’s political arc after he won his third term in office:


Four words that he uttered at a news conference last May helped Timothy B. Howard win a third term as Erie County sheriff.

The words were “I won’t enforce it,” and Howard was talking about the SAFE Act, a controversial new state firearms law that has outraged gun owners.

…Late Tuesday night, a jubilant Howard thanked his supporters and leaders of the Republican and Conservative parties for helping him win. He said people all over Erie County have thanked him for his stand on the gun issue.

“I did what I thought was the right thing to do,” Howard told The Buffalo News. “People in Western New York feel strongly about the Constitution and Albany’s misreading of it.”

The Erie County sheriff’s office is reportedly the largest local police force in western New York, with 1,000 employees and a budget that tops $100 million. Howard’s position at the center of the sheriffs’ collective rebuttal to New York Governor Andrew Cuomo, a Democrat who pushed hard for the SAFE Act’s swift passage into law, has been a high-profile one.

Howard went a step further than many of his law enforcement peers in New York, filing an amicus curiae brief on behalf of New York sheriffs attached to the SAFE Act lawsuit. The suit, originally brought in Federal court by the New York State Rifle and Pistol Association, claims the law infringed on citizens’ 2nd Amendment rights. The suit is ongoing.

Howard never took a defiant position against the SAFE Act in his own county; he simply said he would not initiate any enforcement proceedings that would bring the State into an adversarial relationship with citizens who choose to violate it, because the Nation’s founding documents take precedence over subsequent laws that abrogate their instructions.

“The Constitution is the law of the land,” Howard said in May. “If you know it’s a violation of the Constitution, how can you enforce it? … I don’t think we’re going to suppress evidence; I just don’t think we’ll be actively pursuing it.”
Posted by Diane Sori at 10:23 AM