Op-ed:
Betrayed and left behind
By: Diane Sori 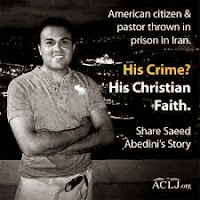 Shameful…utterly and completely shameful for America is NOT supposed to leave anyone behind.

Four were left behind in Benghazi to die…Bowe Bergdahl is still a prisoner of the Taliban who Obama now wants to negotiate with…an 85-year old Korean War veteran is being detained in North Korea and no one has any idea why…and Pastor Saeed Abedini…an Iranian born American citizen who converted from islam to become an ordained Evangelical pastor…has languished for over a year in the hell-holes that are the signature of Iranian jails.

His crime…Abedini is a Christian pastor who chose to practice his Christian faith…to preach Christianity in Iranian homes while in Iran to continue work on an orphanage he was building and building it with government approval. Arrested while with relatives, Abedini was convicted on charges of ‘crimes against national security’ and was given an eight-year prison sentence.

And so while leaving a POW, American diplomats, and an elderly veteran behind are crimes in and of themselves which this administration is most definitely guilty of…add in now that Barack HUSSEIN Obama is also guilty of leaving a ‘man of the cloth’ behind…an American pastor whose only crime was simply spreading the word of Jesus Christ. And so red flags should be raised for every American of faith as Barack HUSSEIN Obama…the man who professes to be a Christian…had a perfect opportunity to secure Abedini’s release…an opportunity as in if Iran wanted some sanctions lifted the pastor MUST be set free…and that should NOT have been open to any negotiations…period.

But this president…a president who has turned GITMO into a country club for terrorists…cares NOT about the torture…both physical and mental…that is the harsh reality of Abedini’s current life. And last week’s talks in Geneva were seen by Abedani's family as holding the key to his release, but the Obama White House confirmed that Abedini’s imprisonment was NOT even mentioned during those talks.

NOT even mentioned…NOT brought up at all…for Iran had NO incentive to release him as Obama capitulated on everything they wanted...as Obama’s shill John ‘Swiftboat’ Kerry remained silent…calculatingly silent even after the American Center for Law and Justice, which represents the Abedini’s family, sent Kerry a letter urging him to demand Abedini’s release as a condition of any agreement on Iran’s nuclear program. 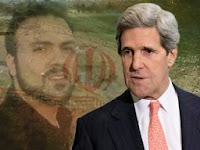 But we all know that letter was ignored and so Jay Sekulow, Chief Counsel of the The American Center for Law and Justice (ACLJ) issued this statement, “President Obama and Secretary of State Kerry turned their backs on a U.S. citizen by refusing to secure his freedom before reaching an agreement with Iran.”

And amazingly…and I NEVER thought I would ever say this…NOT all the blame for Abedani being left behind can be placed on Obama and Kerry alone for where is the mass outrage from America’s Christian community…why for the most part have they remained silent…is it that all the scandals currently on America’s plate have so distracted them from focusing on one of their own in grave danger…could the hit to their collective pocketbooks have redirected their moral compass inward allowing the severity of the scandals to have turned America’s Christian heart cold…it sadly seems that way.

Or could it simply be that the plight of one lowly man…a man who knowingly knew the consequences of his actions before he ever set foot on Iranian soil…is just NOT worth the risk involved in helping him.

Now in NO way am I saying that America’s Christian community does NOT care…I’m saying the extent of their caring…the volume of their voices…seems quite limited in its scope in this particular case. There are petitions circulating to try and secure Abedani’s release…there are a few scattered here and there rallies to bring his plight to the public consciousness…there are letters being written to Congressmen by many of all faiths…but all this is moot as the number of voices is just too small to be taken seriously by this administration…an administration headed by a man who believes the muslim call to prayer is the most beautiful sound in the world.

And that says it all for America’s muslim president…and make NO mistake Barack HUSSEIN Obama is a muslim…could care less about the plight of a Christian pastor never mind that he’s an American citizen.

But above all else…and another black eye delivered by Obama to the American people of all faiths…is that by Abdeini’s plight NOT being part of the negotiations…actually NOT being a precursor to any negotiations even being discussed…shows Iran and the world that Barack HUSSEIN Obama believes that American lives…Christian lives…are indeed expendable. And by the very deal reached, Barack HUSSEIN Obama has also proved that Jewish lives…whether American Jews or Israeli Jews…are just as expendable. 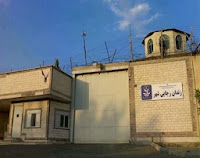 And so Pastor Abedani is left to languish in Rajee Shahr Prison in the city of Karaj, one of the worst of all Iranian prisons…a prison where political inmates like Abedani are put in 10′ by 10′ cells with five other inmates in the ward reserved for murderers and rapists. And while Iran has said he can go free if he renounces his Christian faith and becomes a follower of Islam once again, Abedani…a man of principal and faith…has decided to stand strong with his God…the one true living God of the Christians and Jews.

And that is something Barack HUSSEIN Obama cares NOTHING about for his god is NOT Abedani’s God…nor is his god the God our great nation was founded upon…and to that I say…period.
Posted by Diane Sori at 6:17 AM