Are You Smarter Than a Communist?

We’ve known that I'm smarter than a communist, but now comes confirmation that I’m smarter than government economists—which still is a rather hollow accolade.

GDP figures for 2013 came out and despite a doubtful surge that came in the last half of the year GDP still managed to squeak under 2%, just as I predicted at the beginning of the year.

“For 2013 as a whole,” says ABCNews, “the economy grew a tepid 1.9 percent, weaker than the 2.8 percent increase in 2012, the Commerce Department said Thursday. Growth was held back last year by higher taxes and federal spending cuts.”

And the War on Energy, the EPA, the IRS, the Fed and the general problems that Democrats have with adding, subtracting, multiplying and dividing conspired to keep growth slow. You'd have to be a communist not to admit of theses facts.

“For some reason, today pundits are appalled by the loss of Fed credibility…. Perhaps instead of that,” writes ZeroHedge, our favorite finance crime fighter, “the sophisticated financial community should focus on the core of the problem: the Fed's chronic inability to look even more than a couple of years into the future without being dead wrong about what transpires, even in the absence of a great financial crisis (which the Fed never could predict in the first place of course).”

In graph below ZH details the various revisions to GDP for 2013 that the Fed has made as it got closer and closer to its target date.

What’s most appalling about it is that even in June and September of this year, the Fed was still forecasting high even as the economy needed 4.1% and 3.2% annual growth rates in quarter three and four respectively just to come in under 2% for the year.

But don’t worry say economists. This year should be much, much better.

“This year, economists think the economy will get a lift from continued gains in hiring,” writes ABCNews. “Further steady job growth would give more households money to spend and help lift consumer spending, which accounts for about 70 percent of economic activity.”

The jobs numbers are at best mixed, as are a whole host of other data on the economy going into 2014.

Personally I’m more like a Washington is half full of it kind of guy, and always the wrong half.

Job gains of always been the key to economic growth, and there’s not a lot of good news on that front. While it’s true that unemployment claims of been trending down the last several years, 2013 has been sideways. And a late surge of volatility in the index could point to a reversal of the trend since about September 2013.


US Initial Claims for Unemployment Insurance data by YCharts 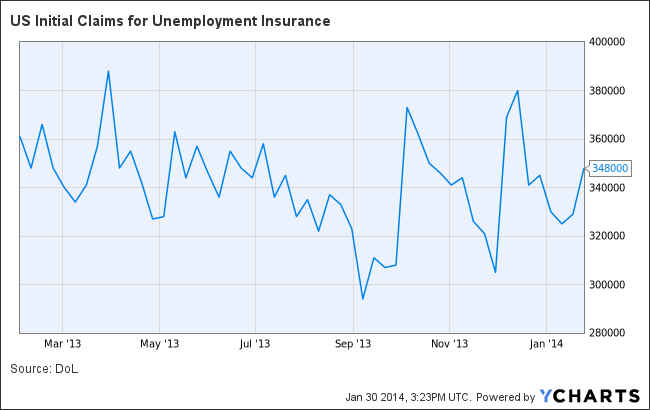 As seen in the chart above claims volatility has picked up substantially since September. Much of that volatility is due to unemployment claims not being processed in a timely manner in certain large states. But if you apply just a little technical analysis since September to the chart, there's no doubt that there's been at least a temporary reversal. Claims are not trending downward, they’re trending upward.

And even the mainstream media has recently acknowledged that much of the improvement in the unemployment rate is coming via a shrinking workforce, not a growing number of jobs.

That’s akin to breaking a 12-inch ruler in half, and then claiming that one half of the ruler is still equal to one foot.

David Williams of WilliamsEdge and PageTrader.com, a sponsor for Ransom Notes Radio and a specialist at forecasting market direction, has told me that 2014 will mark an important market top.

By the time of the midterm elections in 2014 the market should be reversing course, or at least sideways, in my estimation. Williams believes that this could mark the beginning of a multi-year bear market.

The bad news obviously is that nobody likes the stock market to go down when all of us in one manner another are vested in stock markets returns for our retirement plan.

The good news however could be that 2014 might be the year where Main Street and Wall Street start to work in tandem to affect change.

We just need Washington to stop being the uninvited third wheel to the economic machine driven by Wall Street and Main Street.

Remember: I’m not a government economist. Or a communist.

I’m just smarter than either.