If Obamacare is a success, as the White House and establishment media would like us to believe, then why is the Obama Administration so anxious to

After all, surely we haven’t set the bar so low that the Administration can claim victory simply because it has coerced and/or bribed a few million people into an Obamacare plan?

Here’s some of what the Wall Street Journal recently wrote about a very suspicious change in the way the government measures health insurance coverage.


Out of the blue, the Census Bureau has changed how it counts health insurance—at the precise moment when ObamaCare is roiling the insurance markets. Since 1987, the Current Population Survey, or CPS, has collected information on the health-insurance coverage status of Americans.

…But this year the Census revamped the CPS household insurance questions, muddying comparisons between the pre- and post-ObamaCare numbers.

…Robert Pear of the New York Times obtained internal Census documents that note that the new CPS system produces lower estimates of the uninsured as an artifact of how the questionnaire is structured. …For changes this substantial, standard procedure would be to ask the new and old questions concurrently. With an overlap, researchers could study changes over time using the long-term historical information without introducing bias, as well as interpret emerging developments with new tools. …this sudden change will undermine public trust in the supposedly nonpartisan institutions of government. Muddying a useful source of information about ObamaCare’s results is definitely unfortunate, but our guess is that it wasn’t coincidental.

Allow me to re-phrase that last sentence. The disingenuous change to the Census data on insurance is about as coincidental as the Administration’s efforts to re-define poverty and about as random as the IRS’s decision to only undermine and attack the political rights of Tea Party groups.

But there’s more to say about Obamacare than merely pointing out dishonest manipulation of government data.

We also have some very bad news for taxpayers.

Here’s what Chuck Blahous wrote for E21, starting with an observation of how the media wants to boost Obama.


Earlier this month there was tremendous press attention to new data indicating that enrollment in the Affordable Care Act (ACA)’s health insurance exchanges had surpassed 7 million. …much of the press, desperate to write something positive after months of reporting on website glitches and insurance plan cancellations, characterized the milestone as good political news for ACA supporters.


I’ve already explained that the supposed good news is actually bad news, but Chuck has some very important details on how taxpayers are especially vulnerable.


…what is unfolding before our eyes is a colossal fiscal disaster, poised to haunt legislators and taxpayers for decades to come.It is quite possible that the ACA is shaping up as the greatest act of fiscal irresponsibility ever committed by federal legislators.

…the ACA is a commitment to permanently subsidize comprehensive health insurance for millions who could not otherwise afford it, which the federal government has no viable plan to finance. Moreover, experience shows that it is very difficult to scale back such spending once large numbers of Americans have been made dependent.

The article includes a graph that compares the early costs of major entitlement programs.
As you can see, Obamacare’s fiscal burden is second only to Medicare.

Chuck then explains that the costs in the early years for new entitlements are just a drop in the bucket.


…after these initial rollouts, Social Security, Medicare and Medicaid costs grew far faster than originally envisioned, sometimes due to subsequent legislation, sometimes due to unanticipated healthcare cost growth. It wouldn’t be surprising for either factor to affect the ACA, which would be even more problematic… We do know that the ACA’s financing mechanisms are already falling apart. The ACA’s much-reported website glitches and enrollment shortfalls had actually suggested an upside; if enrollment continued to fall short of previous projections, it was possible that some of the fiscal damage could be contained.

But if enrollment has picked up as the law’s financing mechanisms disintegrate, the fiscal damage will be worse than anticipated.

Needless to say, this is hardly shocking news.

Entitlements inevitably become fiscal swamps and the costs almost always are far higher than the early estimates.
Here’s an oldie-but-goodie video I narrated on the topic of ever-climbing taxpayer burdens for health entitlements.  Click here: http://finance.townhall.com/columnists/danieljmitchell/2014/04/18/more-obamacare-failure-n1826081/page/full

I’d like to claim that this video proves I have great insight and brilliance, but that would be akin to claiming superior ability for predicting that Chicago is warmer in July than in February.

P.S. Since we’re on the topic of government-run healthcare, I recently wrote about Vermont’s plans for a single-payer system.

Except I didn’t really write about the Green Mountain State’s experiment with socialism. Instead, I used the opportunity to discuss third-party payer, which is America’s real government-created healthcare problem.

Now it’s time to say something specifically about what’s happening in Vermont. Though, to be more accurate, all I really need to do is quote Megan McArdle’s column from Bloomberg.


Of the plans that states have hatched for the Affordable Care Act, none has been bolder than that of Vermont, which wants to implement a single-payer health-care system, along the lines of what you might find in Britain or Canada.

Except Vermont politicians haven’t bothered to find a way to pay for this boondoggle.


Vermont needs to find some way to pay for it. Although Act 48 required Vermont to create a single-payer system by 2017, the state hasn’t drafted a bill spelling out how to raise the additional $1.6 billion a year (based on the state’s estimate) the system needs.

The state collected only $2.7 billion in tax revenue in fiscal year 2012, so that’s a vexingly large sum to scrape together. …Paying for this program would likely make Vermont the highest-taxed state in the nation, by quite a lot.

Megan thinks the cost would so high that Vermont will abandon the scheme. And she has a very optimistic assessment on what this means nationally.


…this is going to be expensive. So expensive that I doubt Vermont is actually going to go forward with it. This should be instructive for those who hope — or fear — that Obamacare has all been an elaborate preliminary to a nationwide single-payer system. It isn’t. The politics are impossible, and even if they weren’t, the financing would be unthinkable.

I very much hope she’s right, and I’ve actually expressed optimism that Obamacare has changed (in a favorable way) the political dynamics on the healthcare issue.

But I’m still not quite as hopeful as Megan.

Leftists are too clever to make an all-or-nothing push for single-payer on the national level. They know that’s too risky.

But they have been quite adept at incremental changes to expand the role of government and undermine markets.

And if they ever get a new source of revenue, like an energy tax, financial transactions tax, or a value-added tax, then they’ll be able to push for even more statism. 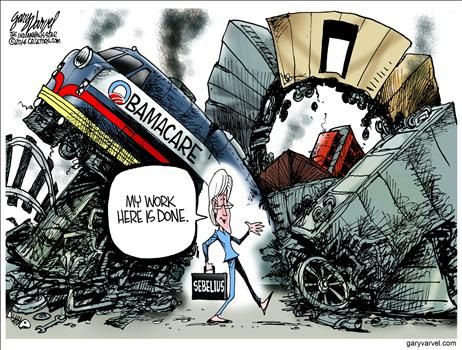 P.P.S. If you want some fun reading about single-payer, check out these horror stories about the system in the United Kingdom.
Posted by Diane Sori at 1:27 PM