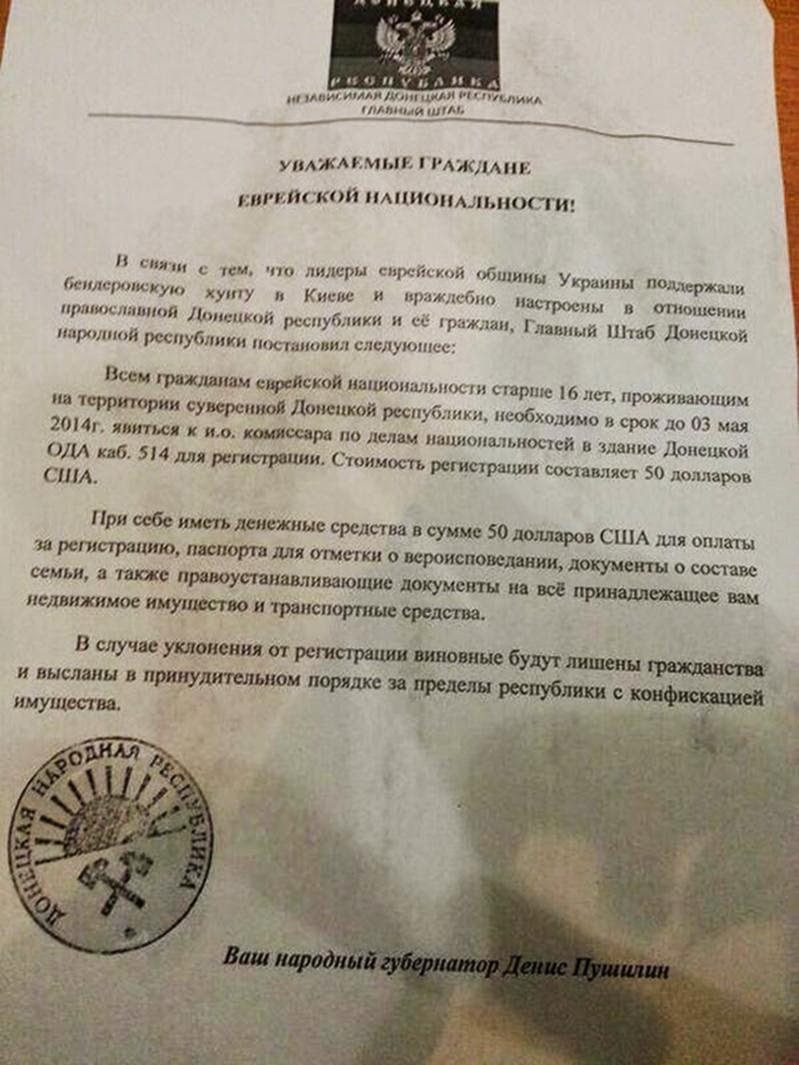 Op-ed:
Yellow stars and ghosts that haunt...players in a modern day revolution
By: Diane Sori

"We're hoping it's just a provocation but I always thought the days that Jews would become scapegoats for whatever reason were long over."
- Yosef Gurevitz, saw one of the letters telling Jews to register

In the months since Ukraine's pro-Moscow government of President Viktor Yanukovych was overthrown, accusations of fascism and anti-Semitism from both the pro-Russia and pro-Ukraine sides have been surfacing and have Vladimir Putin worried about the rising tones of hatred against Jews in the region. And now as shadows of the Holocaust...a nightmare straight from the bowels of hell...seem to be resurrecting again...Jews in Donetsk, Ukraine...over 16 years of age...are being told via letter to pay a fee of $50 U.S., provide a list of property they own, and register as Jews with the pro-Russian separatists or face loss of citizenship or expulsion.

Today, only about 70,000 remain of a once thriving two million plus Jewish community and the ghosts have now returned to haunt...the ghosts of the 1.5 million Ukrainian Jews who were exterminated between 1941 and 1945, when most Ukrainians either outright cooperated with the Nazis or simply looked away.

The letters were handed out to Jews leaving synagogue after Passover services. Saying that all Jews must register with a 'commissar' at the regional government headquarters by May 3rd, the letters are supposedly the handiwork of Denis Pushilin (who claims that he didn't write them), the chairman of the People's Republic of Donetsk...a pro-Russian group...who are against the new Ukrainian government in Kiev.

"I have no doubt that there is a sizable community of anti-Semites on both sides of the barricades, but for one of them to do something this stupid—this is done to compromise the pro-Russian groups in the east." Fyodr Lukyanov, editor of Russia in Global Affairs. 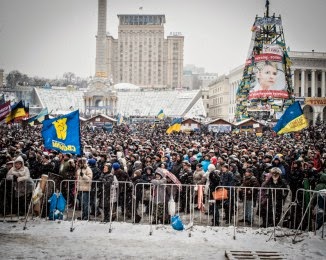 So while most believe the letters to be real, some say they're NOTHING but propaganda to stir up trouble as the Jews have been used since the beginning of the Ukrainian conflict as fodder for the provocation machine...used as an attempt by Western Ukrainians to delegitimize the pro-Russian movement in Eastern Ukraine, just as the Russians used accusations of anti-Semitism to speak against the Maidan revolutionaries (the name given to those who gathered on Kiev's Independence Square to take part in protests that eventually toppled Yanukovich)...freedom fighters, if you will, who wanted Ukraine to become part of the European Union.

And now those very sentiments are being used to stir up trouble as Secretary of State John 'Swiftboat' Kerry is in Geneva to mess up the talks between the two sides...just like he messed-up the talks between the Israelis and the Palestinians. Kerry called the letters "grotesque" and said that such acts were "beyond unacceptable" just as diplomats claimed to have already reached a deal on Ukraine. But the truth is how can a deal have been reached when pro-Russian separatists, led by Denis Pushilin, say they will NOT be bound by any deal that involves laying down their guns or vacating the public buildings they have taken over...that is at least until the Ukrainian government voluntarily steps down.

And that is something that will NOT happen under this anything but a deal. 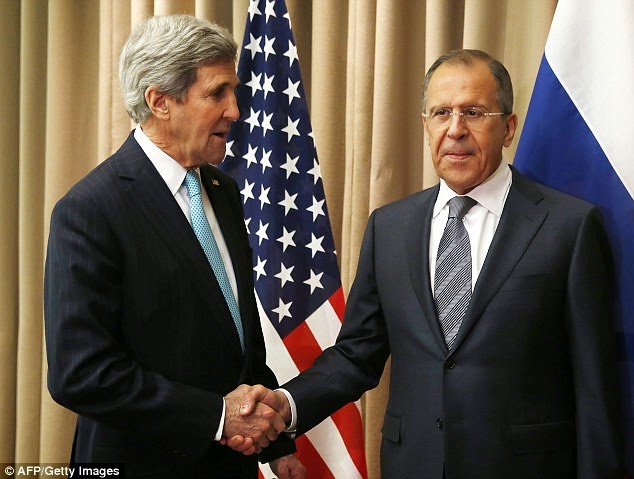 These two critical requirements are the make or brake pieces of any agreement that hopes to be successfully put in place, and without them in place the deal is NOT worth the paper it's written on. And 'The Right Sector,' another far-right nationalist group who used violent street tactics to support the Maidan in bringing down Yanukovich, saw the Geneva accord as being directed only at pro-Russian separatists in the east.

"We don't have any illegal weapons and so the call to disarm will not apply to us. We, the vanguard of the Ukrainian revolution, should not be compared to obvious bandits," said Right Sector spokesman Artem Skoropadsky.

And truth be told, Vladimir Putin has come out the winner once again for nowhere in this agreement is there any mention of Russia's annexation of Ukraine's Crimea Peninsula nor is there any mention demanding Russian troops being removed from the territory of Ukraine, and most importantly there is NO mention about protecting the territorial integrity of Ukraine. This tenuous at best tentative agreement...put together by the U.S., Russia, Ukraine, and the European Union...simply calls for an end to violence and intimidation in Ukraine by demanding an end to the illegal occupation of buildings and squares.

And except for offering amnesty from prosecution for those who agree to disarm (unless they've committed serious violent offenses), this sad ineffectual agreement offers the only hope right now of halting a stand-off in Ukraine that could escalate to a point where U.S. military involvement would seriously have to be considered... Obama be damned on that one...for the fact is that the fuse for a new Cold War has indeed been lit.

And while a former senior aid to Vladimir Putin claims the West sold out to the Kremlin on the deal, John 'Swiftboat' Kerry croaked that, "If there is not progress over the course of these next days the there will be additional sanctions, additional costs as a consequence."

And what say our fearless leader (gag) about all this...while NATO announced it was sending warships to the Baltic, Barack HUSSEIN Obama approved more non-lethal military support for Ukraine. Support like saying that the meeting in Geneva between Russia and the western powers was promising but...and here he reiterates Kerry's words...that the U.S. and its allies were more than ready to slap even more (useless) sanctions on Russia if the situation fails to improve within a certain unspecified time frame.

As for Vladimir Putin...when the deal was reached Putin warned that it was because he had the Federation Council...Russia's upper house of Parliament... backing his use of force if need be.

"I really hope that I do not have to exercise this right and that we are able to solve all today’s pressing issues via political and diplomatic means,” Putin said, but when it comes to the 'Russian Bear' force is his weapon of choice while our anything but leader loves to draw 'red lines' in the sand that he scuffs out when the going gets tough. But now with the Ukrainian Jews possibly sandwiched in the middle the stakes have gone up as the ultimate outcome still remains unknown, and that is the scariest part of all.
Posted by Diane Sori at 12:00 AM