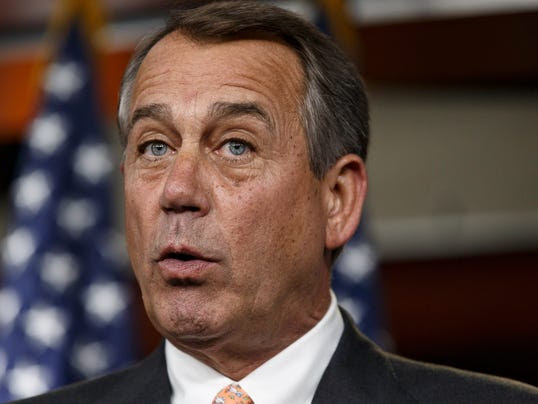 WASHINGTON — House Speaker John Boehner confirmed Wednesday that he intends to sue President Obama in the long-running dispute between the administration and congressional Republicans over the scope of the administration's executive authority to enforce laws.

Boehner added: "Congress has its job to do and so does the president. And when there's conflicts like this between the legislative branch and the administrative branch, it's in my view our responsibility to stand up for this institution in which we serve."

Boehner can use his authority as speaker to convene the Bipartisan Legal Advisory Group, a five-member legal panel appointed by GOP and Democratic House leaders, but weighted towards the majority. BLAG has authority to direct the U.S. House Office of General Counsel, to participate in litigation and represent the U.S. House itself.

The House is expected to vote to move forward with a lawsuit next month.

The impending lawsuit has the potential to test the constitutional balance between the legislative and executive branches. Republicans have long maintained that the White House has overstepped its legal authority by subverting laws approved by Congress on a number of matters.

It is unclear which executive actions Boehner would challenge, but in recent years Republicans have protested executive actions halting the deportations of immigrants illegally residing in the United States, delaying enactment of certain provisions of the Affordable Care Act and raising the minimum wage for federal contractors, as well as executive actions to expand gay rights and close the gender pay gap.

White House spokesman Josh Earnest said Obama would prefer to work with Congress, but "where necessary, he is willing to take action on his own using the executive authority that's vested in the presidency."

House Minority Leader Nancy Pelosi, D-Calif., called the effort "subterfuge" because Republicans need "some aura of activity" in a log-jammed Congress. "There really needs to be an adult in that room of the Republican caucus," Pelosi said.

Earnest also questioned the cost. "The fact that they are considering a taxpayer funded lawsuit against the president of the United States for doing his job, I think is the kind of step that most Americans wouldn't support," he said.

It is unclear what the cost of suit against the president would be, but a recent, unsuccessful effort by BLAG to defend a gay marriage law cost $2.3 million.

Democrats also say the lawsuit is a political maneuver to appease the conservative base, which has called for impeachment proceedings against Obama for any number of offenses. Boehner dismissed that Wednesday, and said the lawsuit was not a step in that direction.

"This is not about impeachment," he said. "This is about his faithfully executing the laws of our country."

Contributing: David Jackson
Posted by Diane Sori at 9:46 AM