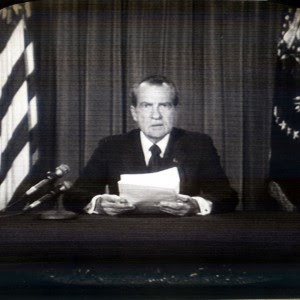 UPI FILE
Imagine, if you will, the President of the United States — having already established an arrogant disregard for not only the laws of the land, but his own oath of office — engaged in political subterfuge so craven that it literally boggled the mind of the people he purports to represent. In our fun little hypothetical, let’s say he not only attempted to deploy the Internal Revenue Service as a weapon against his own constituents, but either directly participated in or willingly ignored illegal conduct by his own accomplices as they attempted to hide their malfeasance from the American people. Let’s further imagine that this hypothetical Commander in Chief had been repeatedly caught blatantly lying to the people about other nefarious activities that he and his Administration had undertaken and that, when pressed for answers by duly sworn representatives of the people, this President both refused to cooperate with investigators and attempted — or allowed his subordinates to attempt — to destroy vital evidence of the crimes in question. I wonder what end result might be produced by such scandalously duplicitous behavior?

Wait; what’s that you say? Such a disgraceful episode has already occurred? So how did our duly sworn representatives respond to such executive depravity? (Author’s aside: Generally, quoting enormous blocks of text is frowned upon, mostly because some people — and I won’t mention any names here [*cough* Vice President Joe Biden *cough*] — lack compunction. However, sometimes it’s unavoidable. The following certainly qualifies.)


The means used to implement this course of conduct or plan included one or more of the following:

• making false or misleading statements to lawfully authorized investigative officers and employees of the United States;

• withholding relevant and material evidence or information from lawfully authorized investigative officers and employees of the United States;

• approving, condoning, acquiescing in, and counselling witnesses with respect to the giving of false or misleading statements to lawfully authorized investigative officers and employees of the United States and false or misleading testimony in duly instituted judicial and congressional proceedings….

(I)n violation of his constitutional oath faithfully to execute the office of President of the United States and, to the best of his ability, preserve, protect, and defend the Constitution of the United States, and in disregard of his constitutional duty to take care that the laws be faithfully executed, has repeatedly engaged in conduct violating the constitutional rights of citizens, impairing the due and proper administration of justice and the conduct of lawful inquiries, or contravening the laws governing agencies of the executive branch and the purposed of these agencies…

“This conduct has included one or more of the following:

Does any of that sound familiar? If you’ve escaped the indoctrination of government-run “schools” and teachers’ union thugs, you might recognize the heavy parts of the articles of impeachment prepared by Congress — with full support of the Democratic members — against President Richard Nixon in 1974. Other than some really unfortunate style choices, what was the major difference between then and now? Nixon was a Republican. Imagine that.
Posted by Diane Sori at 8:26 AM