Op-ed:
Executed by a Madman in a House of God
By: Diane Sori / The Patriot Factor / Right Side Patriots on CPR Worldwide Media cprworldwidemedia.net 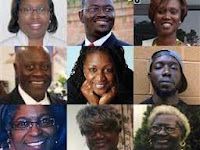 "We don't have all the facts, but we do know that once again innocent people were killed in part because someone who wanted to inflict harm had no trouble getting their hands on a gun."
- Barack HUSSEIN Obama speaking soon after the Charleston church shooting

By now everyone knows what happened last week when 21-year old madman Dylann Storm Roof executed nine innocent people engaged in a Bible study/prayer meeting at the Emmanuel African Methodist Episcopal Church (A.M.E.) in Charleston, South Carolina. Corrupting the sanctity of a House of God, Roof was and remains a vile evil racist thug to his very core who was out to kill innocent black people for NO other reason than they were black. There is NO excuse for what he did and while some of the victim's families have 'forgiven' this animal, including the daughter of victim Ethel Lance who said, ”I forgive you...and have mercy on your soul. You hurt me, you hurt a lot of people, but God forgives you, and I forgive you”...I believe that some crimes are beyond the forgivable and this is indeed one of them.

But as horrific as the crime itself was we cannot overlook an equally vile crime...the crime of politicizing this tragedy...of trying to garner political fodder off the tears of those who lost loved ones on that most dark of days.

"You never let a serious crisis go to waste. And what I mean by that it's an opportunity to do things you think you could not do before." - former Obama advisor and now Chicago Mayor Rahm Emanuel 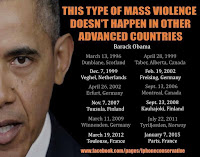 Oh so fast to renew the call for more gun control ...basically translating into a call for the repeal of the Second Amendment...Barack HUSSEIN Obama...in his 14th statement relating to a mass shooting since he took office (might there be a correlation here...just saying)...spewed forth his mantra that once again the easily obtained 'bad' gun did the killing completely ignoring the fact that someone had to pull the trigger of said 'bad' gun. Saying...lying actually...that violence of this nature "doesn't happen in other advanced countries"...just ask the victim's families of the 12 instances of gun violence that have occurred since 1996 all across the 'advanced' countries of Europe about that...Obama forgets the all-important facts that this shooting happened in a 'so-called' gun-free zone (as per recent statistics: 92% of mass killers intentionally choose so-called 'gun free zones' because they can kill a large number of people before being stopped by armed guards, police, or concealed carriers) and that gun control will NEVER prevent acts of a madman from happening for NO amount of laws passed can legislate those hell-bent on perpetrating evil.

So while Obama and the liberals scream ad-nauseum for more stringent and far-reaching gun laws, including the designation of more areas where guns are completely banned...blaming what they call the current 'ineffective laws' for the attack and issuing a rebuke of the politics surrounding current gun control legislation...the far-left propaganda machine itself continues to spew out a hateful attack on we who are conservatives by trying to tie-in those of us who believe in limited government and the Second Amendment to these horrific murders. Yet all their rhetoric does is give more credence to the fact that criminals and the mentally ill will NOT be disarmed simply because some law says they are to be disarmed, but that only we law-abiding citizens will be the ones that will be disarmed...disarmed and vulnerable to the very folks the Second Amendment helps us to protect ourselves and our families from. 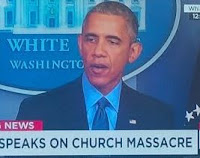 And leave it NOT only to Obama to add even more fuel to the already self-initiated smoldering racial fires that are happening all across our country by saying that since the church where the shootings happened is historically black and located in the South that it “raises questions about a dark part of our history,” now add in Hillary as well who just this past Saturday at the U.S. Conference of Mayors in San Francisco questioned America's heart by saying that "race remains a deep fault line in America and millions of people of color still experience racism in their everyday lives." And to both of them I say...NO...the only question this shooting should raise is how the father of this vile individual...a father who knew well the tenuous at best mental state of his son...a son who obviously showed signs of severe mental health issues that either went untreated or undiagnosed...a father who knew of his son's misplaced animosity bordering on outright hatred of black people...thought that the giving of a .45 caliber gun to him for his 21st birthday could result in anything but bad news and heartache.

But what can you expect from a parent who themselves has been rumored by the media to be a racist, a bigot, and an all-around hater. The lessons Roof learned from his father's examples helped set him on the path he seemed destined to follow. And when you couple it with a weak mother who also knew that her son had serious issues...a mother who at least had the common sense to take the gun away from her son but who failed to either hide it well or dispose of it...the stage had been set and the players were in place for last week's scenario.

And that brings up the question of should mentally ill individuals...as Dylann Storm Roof is suspected of being...individuals who suffer from such mental illnesses as being bi-polar, manic depressive, paranoid delusional, or schizophrenic...be allowed to purchase, posses, or be given a firearm. And to that I say NO for while serious mental illness is just that...an illness...it is NOT an illness that is ever really cured. Sure most mental illness...but NOT all...can be controlled by medication, but it can only be so if the ill individual takes their medication as prescribed. And if truth be told most do NOT because of either the side effects or because the person thinks they have been 'cured' and just stops taking their meds. And then when their illness comes back...as is the case most times...it comes back with a vengeance...and imagine the mentally ill person with a firearm in their possession when it does.

But being mentally ill...and remember NO sane person goes on a murderous shooting spree nor does any sane person allow themselves to be fueled by all-encompassing hate...is NOT the only hallmark of a mass murderer. A study done a decade ago whose numbers still hold true today on 34 adolescent male mass murderers found that of the 34, 70% were loners; 61.5% had problems with drug abuse; 48% had a preoccupation with weapons; and 43.5% had been victims of bullying...and Dylann Storm Roof easily fits that profile. Suspected by many of being mentally ill, abusing illegal drugs, having few friends, and being in possession of a firearm...along with bad parenting...is at the heart of what happened in Charleston. 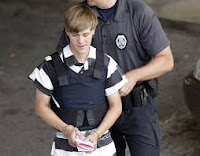 And while Dr. Jeffrey Swanson, a medical sociologist at the Duke University School of Medicine and a leading researcher on the correlation between mental health and violence, found that mass shootings...and Charleston certainly classifies as a mass shooting...are actually rare events that account for only a tiny fraction of American gun deaths each year...the fact remains that 'normal' individuals do NOT go out and shoot a bunch of strangers. And even though overall violence is on a downward trend in the U.S., the actual number of deaths caused by mass shootings has risen. Over the last three decades, the national homicide rate has fallen from 10 per 100,000 in 1980 to 4 per 100,000 today, but the number of actual mass shootings has dramatically risen from 4 per year between 1900 and 1970, to 29 per year since then.

In Roof's case these touch points...his suspected mental illness coupled with his intense and all-consuming hatred of people of color and who upon his arrest confessed that he wanted to start a race war and then kill himself...planning ones suicide is also a sign of mental illness...allowed one ticking time bomb to be lit. And it was just a matter of time before that bomb exploded before the lawyers rushed in to try and declare him insane, ignoring the fact that mental illness differs greatly from insanity in the eyes of the law. And the fact is that Roof was in NO way insane as this attack was carefully and methodically planned and carried out.

And to add to the sadness of this most vile and evil of acts...to add to the sadness even before the nine victims are laid to rest...out comes those who claim the shooting was part of their self-perceived leftist-initiated 'so-called' War on Christianity. But let's set the record straight once and for all...the Charleston shooting had NOTHING to do with the fact that the victims were Christians but had everything to do with the color of their skin. For some like Roof their racial hated fuels their every thought and guides their every action...and this alone was the cause of Dylann Storm Roof's most horrific of acts...and for this alone this most despicable of men should meet his Maker poste-haste and save the South Carolina taxpayers the money that would be spent on housing this bastard for decades to come.
Posted by Diane Sori at 12:07 AM