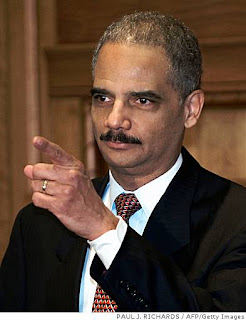 Another Republican seems to have caved as this past Friday Rep. Darrell Issa said he is willing to postpone Wednesday’s contempt of Congress vote against Eric Holder if he turns over the asked for additional documents that were subpoenaed months ago, regarding Fast and Furious and its aftermath.

Holder said the information he is ‘willing to turn over’ will answer the remaining questions Rep. Issa and the House Oversight and Government Reform Committee have, yet he has NOT said if he will or won’t turn over everything demanded.

He is ‘willing to turn over’...in other words Eric Holder will decide, NOT Darrel Issa, what will be turned over.  This stalling tactic, if successful, will show the world just what a bunch of spineless cowards this Committee and Congress is as Holder thumbs his nose at our rules of law and shows his total contempt for our Constitution, as he buys the time needed to destroy incriminating documents.

Mission accomplished in Holder’s eyes while Rep. Issa seems to have forgetten that there is NO compromising on a subpoena, period.

At the heart of all this is the issue that agents involved in Fast and Furious did indeed rely on gun-walking, which is basically letting illicitly purchased guns to be transported to Mexico instead of them being intercepted in an effort to track them back to major arms-traffickers.

Holder continues to insist that he and the DOJ knew nothing about this operation until it was exposed when one of the untracked guns showed up at the murder scene of Border Agent Brian Terry.

To this I say bull, as Holder has changed his story at least nine times while on the stand during the 18 months this investigation has logged so far.  Holder’s testimony before Congress is filled with nothing but lies, subterfuge, and stalling tactics, and now suddenly after going forward with guns a ’blazing (just had to say that) Rep. Issa is willing to postpone the contempt charges while Holder plays him like a fiddle.

Give me a freakin’ break!

Rep. Issa is falling for Eric Holder's stalling tactics hook, line, and sinker...or did someone ‘get to him’...or better yet is Issa just plain out and out afraid of the repercussions Holder’s downfall could bring?  And by that I mean that Obama and his minions will claim that Issa went after Holder simply because he’s black.
After all, Obama successfully played (or so he thinks) the immigration card on Friday so now it’s time to turn the game back to the race card.

If fear is indeed at the heart of Rep. Issa’s backing down then we are in BIG trouble.  Obama and his minions know that fear of the race card is our Achilles heel, as NO Republican to date has followed through from beginning to end on any charges brought against Obama or any of his minions for fear of that race card being used against them.

Now listen up people...we have NO time to deal with or placate these cowards at this point in the game.  They either have the courage to stand by their convictions, and if NOT then they need to get out of the game.  We need people on this Committee and in Congress who will stand up to the corruption coming out of this White House and not be afraid of the consequences, because the consequences are never as bad as the other side tries to scare us into believing they will be.

Eric Holder will continue to do everything he can to drag this investigation out as long as possible to make it go past the November elections.  Holder will play the shell game and release just enough exculpatory information as bait while still holding back the important damaging and incriminating evidence (like he knew all along the nature of what was going on).  Holder will throw Issa a bone, pick it up, and throw it again and again as he has the last laugh at how well he’s played Issa all along.

Eric Holder, and this entire Obama administration, will keep getting away with illegal and unconstitutional acts unless ‘We the People’ stand up and demand that those on this Committee bring contempt charges against Holder on Wednesday as planned, because if they let the Wednesday deadline go by without bringing said charges they never will.

You know it, I know it, and Eric Holder is counting on it.
Posted by Diane Sori at 10:25 AM