A way around Iranian blockade of Strait of Hormuz? 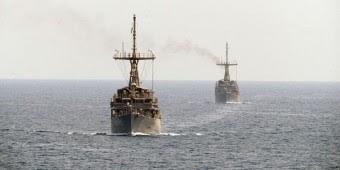 Editor’s Note: The following report is excerpted from Joseph Farah’s G2 Bulletin, the premium online newsletter published by the founder of WND.


The West may be breathing a sigh of relief to know there is an alternative means of accessing Middle East oil should Iran decide to block the Strait of Hormuz through which some 40 percent of the world’s oil and regional trade transits, according to Joseph Farah’s G2 Bulletin.

Iran has threatened to shut down the strait if Israel, the United States or both decide to bomb the Islamic republic’s nuclear facilities.

However, the United Arab Emirates, which sides with the other Gulf Arab countries against Iran, has just made operational its 225-mile Habshan-Fujairah pipeline. It is one of many alternatives to relying on the strait for access to Middle East oil.

According to regional analysts, however, there really is no other economic way to transport most of the region’s large amounts of oil and liquefied natural gas to the West than by sea, meaning through the strait.

The pipeline, which cost $3.3 billion to build, can transport up to 1.4 million barrels of oil a day, which would amount to 70 percent of the UAE’s oil.

The U.S. Navy has assessed that Iran has the capability to block the Strait of Hormuz if it wants to do it.

The Saudis have a new pipeline that goes from east to west to the Red Sea, but it can only carry 3 million barrels of oil a day.

While the Gulf Arab oil producing countries are looking for alternative routes to the strait to transport its oil in the future, use of the existing pipelines as an alternative to the Strait of Hormuz will only be a trickle of the daily global requirement for Middle East oil.
Posted by Diane Sori at 3:28 PM