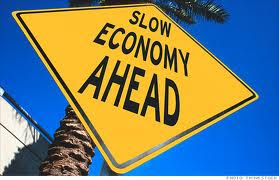 The economy stinks...it’s stunk for the 3-1/2+ years Obama has been in office...it will continue to stink until he’s out of office, period!  The only good news coming from this rotten economy is that Barack Hussein Obama will lose the election because of it as elections are won or lost on economics and economics alone.  And with the economy losing 8.8 million jobs during the recession and only getting back 3.8 million of them under Obama’s policies, stick a fork in him because he’s done.

In a nutshell, our economy stinks because this miserable excuse of a president simply does not understand how economics work as he refuses to grasp the basic economic principal of you cannot spend more than you take in.  But what can you expect from someone who has never owned a business nor has ever held a real job in their entire life.

Unfortunately, the recipients of Obama’s ineptitude are the American people who continue to suffer under a president who vacations and plays golf while 12.7 million of us remain unemployed.

It’s bread and circuses, while Rome, or in this case our economy, burns.

And thanks to Obama the bad economic news continues as just this past Friday The Labor Department reported that non-farm payrolls only added 80,000 jobs in June, keeping the unemployment rate at 8.2 percent, which is way below the expected and hoped for numbers.  This 8.2% figure keeps us at the worst recession level since The Great Depression for the third straight month in a row I might add.

Now add into the mix that the so-called underemployment rate fell for the second straight month, more people went on disability (85,000 in fact) than got jobs, and any pay raises that some might have gotten have been negated by rising prices. This all around bad news is indisputable proof that our economy is still in trouble three years after Obama claimed the recession had ended, especially since he still doesn't get that successful economic growth must be done at the small and medium business level NOT by creating more wasteful and non-important government jobs.

Remember also that it’s almost four years since Obama said that if he doesn’t turn the economy around by the end of his first term in office that he will NOT be re-elected to a second term.  Well guess what, history has proven that NO president since World War II has been re-elected when the unemployment rate was more than 8%.  And I’d like to refresh your memory that Obama also said we’d be down to a 5.6% unemployment level by now with his policies...well guess what we’re not!

Barack Hussein Obama LIED to ‘We the People’ yet again, and now we intend to hold him to what he said about NOT getting re-elected, because the bottom line is that the economy under Obama’s stewardship is simply NOT growing fast enough to create jobs as he has NO idea how an economy runs, should run or needs to run.

And a new Rasmussen national telephone survey seems to bear out that he will NOT get re-elected as the survey reported that 74% of likely U.S. voters rate the economy as ‘very important’ to how they’ll vote...translating to Obama’s goose is cooked.

Cooked goose sounds good to me if it means that the countdown to Obama’s final curtain call has truly begun.
Posted by Diane Sori at 12:07 AM