Op-ed:
The statesman vs. the bully 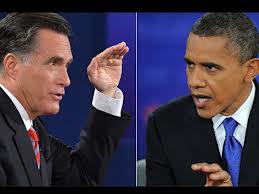 The name of the game is strategy as Mitt Romney wins last night’s debate war.  This is an economic election first and foremost, and all Romney had to do was pass the Commander-in-Chief test...proving to America that he could lead with common sense and reason...and pass that test with flying colors he did.

Using a deliberately calculated move of NOT being confrontational with Obama on his Libya debacle, Romney cleverly forced a checkmate by showing he was NOT a war monger against a man who was condescending, petty, and bullying in his response...a man who has tried to paint him as a George Bush clone when it comes to the Middle East.  Being calmly measured by saying to Obama, “attacking me is NOT an agenda, attacking me is not about how we’re going to deal with the agenda of the Middle East...” Romney showed the cool steady hand needed in a true leader of men...a true leader of America.

But the needed tone of anger did surface in Romney’s response in regards to Israel when he said, "The president began what I have called an apology tour, of going to various nations in the Middle East and criticizing America...and the reason I call it an apology tour is because you went to the Middle East and you flew to Egypt and to Saudi Arabia and to Turkey and Iraq.  And by the way, you skipped Israel, our closest friend in the region, but you went to the other nations...by the way, they noticed that you skipped Israel...”

This response by Romney hit home the point not only in regards to Israel but also brought to the forefront the fact that Obama failed to provide support for protests by Iranian dissidents, leading the mullahs who run the country to conclude that they could keep pushing toward development of nuclear weapons...weapons to use to wipe Israel off the map.

And Obama’s response was to bloviate about the trip he took to Israel when he was a candidate the first time he ran...the first time he ran back in 2008...the man who has NEVER visited Israel as president...the man who bold-faced snubbed Prime Minister Netanyahu so he could sit and chat with the ladies on The View instead of sitting and talking with Netanyahu about the threat Israel faces from Iran.

This point alone drives home the contrast between a sitting president who has made clear to both the American people and to the world that he really could care less about Israel, made it clear to all that while saying the right words about Iran publicly but doing otherwise behind the scenes, the difference with Mitt Romney’s stance of standing behind our ally and friend (even if it means supporting Israel militarily) against Iran became evident for all to see.

And no matter how much bullying Obama tried to do, bullying so evident in his grimaces, hautiness, and jittery moving about shown in the split screen images flashed throughout the debate, Mitt Romney was extremely successful in turning the tables on Obama and tying foreign policy into how it effects economic policy here in America.  Using a key point of speaking of how the economy ties into our debt to foreign nations and stressing how can you lead in the world when you owe foreign nations so much money, Romney rightly brought home to the viewers the point that everything America does throughout the world does indeed revolve around and effect the economy here at home.

And this link between foreign and domestic policy came to the forefront when the issue of China came up.

Repeating his previously said statement that he would declare China a currency manipulator on his first day in office while stressing that China is a valuable trade partner but one who will NO longer be allowed to set the game but one who will abide by the rules we set down for the game.

“I want a great relationship with China. China can be our partner. But that doesn’t mean they can roll all over us and steal our jobs,” Romney said.

Obama replied by accusing Romney of shipping U.S. jobs overseas as a businessman, and of encouraging the growth of automobile manufacturing in China...not Detroit.

“If we had taken your advice, Governor Romney, about the auto industry, we’d be buying cars from China instead of selling cars to China,” Obama said.

Well guess what Obama...all one needs to do is check out the numerous production facilities GM has opened in China with American monies, borrowed from China, Obama invested in China to create jobs for the Chinese NOT for Americans and ALL on your watch!

But the bottom line in last night’s debate is that while it’s obvious that a political outsider will always be at an obvious disadvantage to a commander-in-chief when foreign affairs are the topic, Mitt Romney finished strong and steady. Obama’s nasty, childlike, and very un-presidential snide remarks and butt-in attempts to make points while Romney was speaking, showed that Romney remained above the fray sticking with facts and facts alone...something a true statesman will always do.

Obama had to show mastery over Romney and he failed to do that on all accounts.  Mitt Romney had to show that he is NOT a warmonger eager to send U.S. troops into sovereign country’s affairs and he did that. Mitt Romney looked presidential as he spoke of wishes for ALL Americans while Obama talked about ‘me, myself and I’ first and the nation second.

Mitt Romney displayed control and humility, showing a presidential aura we haven’t seen these past four years as he spoke of his plans for America’s future with a voice that was hopeful, knowledgeable and reassuring as he asked Americans do you want more years of the same failed policies or a vision for the future.

Last night Mitt Romney proved to all that he is a statesman...a statesman for ALL Americans willing to work across 'the aisle'...while Barack HUSSEIN Obama put forth the face of a bully and a whining child, a man truly out of his league and I hope out of a job on November 6th.
Posted by Diane Sori at 2:30 PM