'I have no intention of resigning' 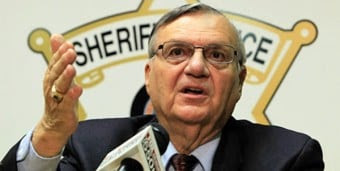 Arizona Sheriff Joe Arpaio finds himself under increasing attack as he prepares to release new findings in his investigation of President Obama’s eligibility for the state’s 2012 election ballot.

“I have no intention of resigning,” said Arpaio, who is running for his sixth term as sheriff of Maricopa County. “They forget I have a four-decades long career in federal law enforcement that includes having been a special agent for the FBI and having worked for the Drug Enforcement Agency in the United States, as well as in Argentina, Turkey and Mexico.”

WND previously reported the intensity of attacks on Arpaio at both a state and national level.

Already, Arpaio has announced that his volunteer law enforcement investigation has found probable cause that Obama’s long-form birth certificate and his Selective Service registration form are forgeries. Arpaio and his team made the announcement at a March 1 press conference.

A second press conference is expected in the next few weeks to announce more findings Arpaio suggests will be explosive.

Last week, Arizona Republic columnist Laurie Roberts wrote a piece in which she reminded Arpaio of his pledge 20 years ago when he first ran as a candidate for Maricopa County sheriff to serve only one term and turn the office into an appointed post. Arpaio has said that his campaign pledge was a mistake, because if he reported to a political official, he would have been fired 20 years ago and not had the liberty to “do what I felt was right for the people that I serve.”

WND has previously reported that political operative Randy Parraz, a self-described “organizer,” has been running a determined campaign to oust Arpaio from office.

Parraz, together with a small group of activists operating under Parraz’s “newly formed organization, Citizens for a Better Arizona, have unsuccessfully tried to disrupt meetings of the Maricopa County Board of Supervisors to demand the oversight group vote to request Arpaio’s resignation.

Arpaio, an elected sheriff, cannot be removed from office by a vote of the county board.

But the ineffectiveness of Parraz’s own political actions against Arpaio has not stopped him from expressing frustration that the Obama administration is taking so long to press Arpaio in federal court.

“We’re not sitting back waiting on the federal government on this,” Parraz recently told TPM. “They move at a pace that’s not conductive to the situation.”

Meanwhile, establishment media have portrayed Arpaio as politically isolated and likely to face federal criminal and civil charges by the Justice Department in Federal District Court.

At the same time, media have downplayed Democratic Party scandals such as Fast and Furious, resignations from the Arizona U.S. Attorney’s office and the possibility the U.S. Supreme Court could uphold the constitutionality of the Arizona legislature’s bill to ensure its citizens are protected from civil and criminal offenses caused by illegal immigrants the federal government is unwilling to police.

As WND reported, new impetus was given to the anti-Arpaio campaign by the recent disbarment of Maricopa County attorney Andrew Thomas in a complicated corruption case.

Establishment media have largely ignored, however, the fact that Thomas and Assistant Prosecutor Lisa Aubuchon were disbarred for filing criminal charges against Maricopa County Superior Court Judge Gary Donahoe and two members of the Board of Supervisors, which oversees Arpaio’s office, Mary Rose Wilcox and Don Stapley. Both are determined Arpaio foes.

The corruption charges against Wilcox and Stapley were never adjudicated after a Pima County judge dismissed the case due to prosecutorial misconduct.

Still, the evidence of government corruption in Maricopa County abounds.

WND reported that as many as 11 Maricopa County employees have been terminated in recent months for allegedly accepting bribes in a court tower construction scandal – one of the Thomas investigations that was terminated by the counter-attack on Thomas that resulted in the disbarment decision.

Still, media have not noted that a grand jury brought more than 100 charges against Stapley for a wide variety of alleged criminal activity, including failing to file financial disclosures to accepting expensive gifts such as three-week Hawaiian vacations and ski trips for him and his family.

Now, Arpaio’s opponents in Arizona are pressing for a federal criminal grand jury to press charges against him for his involvement with Thomas in trying to root out corruption in Maricopa County.

Even if no criminal trial results, Arpaio’s opponents hope to have him under federal criminal indictment at the same time the U.S. Department of Justice presses a civil case against him in the federal courts, alleging he has systematically implemented a policy of violating the federal civil rights of Hispanics.

In July 2011, Dennis Burke, a prominent Democratic Party operative in Arizona, resigned as U.S. Attorney, just as the House Oversight Committee and an internal Justice Department internal investigation began focusing on the role Arizona played in Fast and Furious.

Before taking the job of U.S. Attorney in Arizona, Burke had served as chief of staff to Janet Napolitano when she was the governor of Arizona. He then was a senior advisor to Napolitano when she moved to Washington to become Homeland Security Secretary in 2009 under the in-coming Obama administration.

When Burke resigned, Politico reported any aspirations he might have to follow Napolitano’s footsteps as a tough-on-crime Democrat by becoming Arizona attorney general and then running for governor were dashed.

At the time he resigned, Burke was considered a possible Democratic Party candidate for the seat being vacated by Sen. Jon Kyl, R-Ariz., or as a candidate for governor in 2014.

The next resignation was by Patrick J. Cunningham, the head of the Criminal Division of the U.S. Attorney’s Office in Arizona, who had announced he would take the Fifth Amendment rather than testify before Congress regarding the Department of Justice’s scandalous gun-running operation “Fast and Furious.”

In Arizona, Cunningham was widely regarded as Burke’s “No. 1 Guy,” as noted by reporter David Codrea of the Gun Rights Examiner.

In March, WND reported Kyle and McCain had given their approval to the Obama administration nomination as U.S. attorney in Arizona of John Leonardo, a former Arizona judge with a history of judicial rulings adverse to Arpaio.

Leonardo, who retired last month as Pima County Superior Court judge, threw out an indictment in 2010 against Maricopa County Supervisor Wilcox, a Democrat and an outspoken critic of Arpaio.

In that case, State of Arizona v. Mary Rose Wilcox, Leonardo asserted that Arpaio had “misused the power of his office to target members of the Maricopa County Board of Supervisors for criminal investigations.”

Radical outside agitator plots against Arpaio

In 1994, while yet a graduate student at the Kennedy School, Parraz was recruited to work as a community organizer in Dallas, Texas, by the Industrial Areas Foundation, or IAF, a Saul Alinsky-oriented organization based in Chicago.

According to the National Latino Congress website, it was in Dallas, working for the IAF, that “Parraz learned the fundamentals of the Saul Alinsky model of church-based community organizing.”

In 2002, the national AFL-CIO transplanted Parraz into Arizona to serve as the union’s Arizona state director, a position he held until 2004.

During this two-year fellowship, Parraz and his associate, Scott Sherman, pursued their idea of establishing a “Transformative Action Institute” by presenting their model for progressive social change to what the National Latino Congress estimated was more than 1,000 students. They offered classes at UC Berkeley, Yale, Princeton, New York University, UCLA, UC Irvine, and California State University Fullerton.

In 2007, Parraz returned to Arizona to work as a “residential organizer” for the Laborer’s International union of North America, better known as LiUNA, where by 2009, he received total compensation in excess of $125,000 a year, according to the organization’s official records.

After the Arizona legislature passed SB 1070, widely regarded as the toughest state law passed at that time to oppose illegal immigration, Parraz founded the East Valley Patriots for American Values, the EVPAV, to focus on the recall of Arizona State Senate President Russell Pearce, a long-time Republican state senator and the legislator considered the architect of SB 1070.

Parraz evolved the EVPAV into the Citizens for a Better Arizona, a 501(c)4 organization that dedicated its efforts to the Pearce recall, despite the tax-favored status of the organization requiring it to pursue a “nonpartisan” purpose.

In a recall election held Nov. 4, 2011, in which Democrats were allowed to vote, Pearce lost to his only remaining opponent – Republican challenger Jerry Lewis, a political moderate but, like Pearce, a Mormon.

This week Arizona is prepared to go before the U.S. Supreme Court to defend the constitutionality of SB 1070.

The Parraz-engineered defeat of Pearce has been portrayed in establishment media as evidence that Arpaio is being isolated as his “world crumbles” and “his closest allies have fallen.”

Meanwhile, media have downplayed evidence that a third gun traceable to Fast and Furious may have been used in the murder of U.S. Border Patrol Agent Brian Terry, while avoiding any suggestion the U.S. Attorney’s Office in Phoenix may have played a role in suppressing news of the newly discovered weapon.

Read the preliminary findings of Sheriff Arpaio’s Cold Case Posse investigation after six months investigating Obama’s constitutional eligibility to serve as president in “A Question of Eligibility,” co-authored by Jerome Corsi and Mike Zullo.
Posted by Diane Sori at 12:19 PM