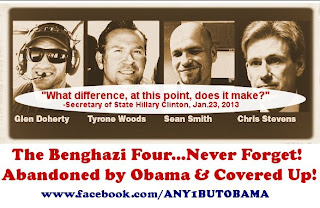 Benghazi...treason at the highest level
By: Diane Sori

Recently, Obama and his mouthpieces, including Secretary of State John 'Swiftboat' Kerry, reiterated something Hillary said during her Benghazi testimony, "it's time to move on."

On FOX News' Special Report last night, in an exclusive interview (which I watched) with a special forces operative who was masked in silhouette with his voice disguised for his protection, said in NO uncertain terms that Barack HUSSEIN Obama is lying about everything that happened the night of September 11, 2012 when muslim terrorists stormed the US Embassy compound in Benghazi, Libya.

This man told about a C1-10 plane that was on patrol in the area, having been based in Croatia, and that it was more than capable of rapid response the night of the attack.  He went on to say that the plane would most definitely have made it to Benghazi before the second attack, and could have aided in evacuating the wounded and maybe even saved Ambassador Stevens and the others.

He also said that at least 15 special forces were stationed in Tripoli at that time and could have immediately been deployed when the first word of impending trouble was sent out by Ambassador Stevens. And he also spoke of two military units that could have been on the ground in time to squelch the uprising from the get-go.

The special operative continued on to say that the betrayal went all the way to the top, and that Obama needs to take responsibility, tell the truth, and own up for the deaths of our Ambassador, his aide, and the two ex-SEALS.

And oh yes, and most importantly, this brave whistleblower said that both Barack HUSSEIN Obama and Hillary Clinton knew that help was indeed available and could have arrived in time to change the outcome.*

And what of the survivors...there were 30 odd survivors of that horrific night and yet NOT a public word has been heard from any of them...and why can't Congress in the course of their official investigation have access to them. What are they privy to that this administration is so afraid of...I think we know and the whistleblower confirmed what we know...Barack HUSSEIN Obama and his minions all knew and this miserable excuse of a president gave orders to 'stand down' instead of helping our people in trouble.

In fact, last night FOX reported that four or more State Department career officials and CIA operatives are 'lawyering up' (as the saying goes) before giving 'sensitive' information about the attack to Congress, and that for now unnamed Obama administration 'officials' have dropped hints to them about the so- called consequences of coming forward and talking.

Threats and blackmail adding to lies and murder...consequences all right but NOT for the whistle blowers. 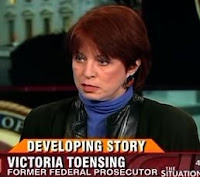 Sounds just like something a certain usurping president and his peeps would do now that they've been caught and exposed like a deer in the headlights.

And get this, Toensing says, “In order to tell the whole story, my client has to provide classified information, but (as of yet) The State Department hasn’t acknowledged a process for doing that” meaning she has NOT received the security clearances necessary to be able to review classified documents and other key evidence she needs to see to properly represent her client.

Heaven forbid the Obama controlled State Department aides in the truth getting out.

Toensing even said that her client, who she won't name for obvious reasons, has important information on all three time periods considered relevant to the attacks...the months that led up to the attack, when pleas for help were rejected...the eight-hour time period when the attacks actually occurred...and the eight-day period that followed the attacks when Obama, Hillary, and crew kept bloviating over and over that the attacks were the result of a spontaneous protest over a video about mohammad.


And with these threats and with interviews in the shadows, it should be obvious even to those with their heads still buried in the sand that this administration, along with a lack of reporting by the main stream media, is doing everything to prevent the whistleblowers from testifying in public and under oath, because Hillary and Obama must be protected at all costs.

So while federal law does provide protections for federal government employees who are whistleblowers. and ensures these people that they will not face repercussions in retaliation for giving information about corruption or other wrongdoing to Congress, we are talking about the Obama administration here, and that means all things taken for granted as being the rule of law NO longer apply.

The Benghazi hearings should be interesting for sure, and just maybe it is 'time to move on' but to move on to the beginning of the end for Barack HUSSEIN Obama and his miserable administration...and that includes Hillary too...and the word 'treason' comes to mind.

* See the Special Report interview in full here: http://nicedeb.wordpress.com/2013/04/29/special-report-lawyer-claims-regime-made-despicable-threats-against-benghazi-whistleblowers-video/
Posted by Diane Sori at 12:13 AM