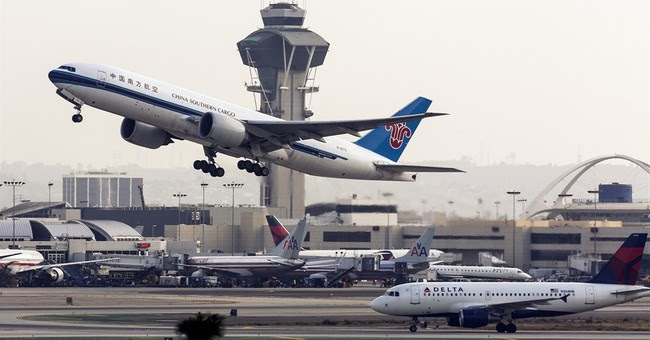 With amazing speed the Senate and House passed a bill to stop air traffic controllers from being furloughed, after a week of travel delays felt around the country as a result of President Obama's sequester temper tantrum. Since President Obama shut down White House tours in March, the President had been waiting for the next opportunity to demonstrate how sequester cuts, a modest two cents on the dollar of the national budget, hurt average Americans as his Administration had predicted. Forced furloughs of air traffic controllers seemed like just the thing to put the squeeze on the American public and teach us all a lesson for demanding those dastardly sequester cuts.

However, as complaints from the public started to roll in the official White House response amounted to throwing up its hands and saying “told you so!” Confident of victory, the Obama Administration refused to shift cuts within the Federal Aviation Administration and keep air traffic controllers on the job by cutting non-essential areas of the FAA (only 15,000 of the agency's 32,000 government employees are air traffic controllers). Thankfully, House Republicans stood firm and the American public rightly recognized the President's petulant gambit. Realizing the public relations disaster heading their way, Senate Democrats forced the President's hand by working out a common sense deal with House Republicans. The President, still loudly complaining, had to go along with the deal.

The shift in momentum for Obama started with the media, led by the Wall Street Journal with two stinging back-to-back editorials that challenged the rather weak rhetoric from the White House, and highlighted nonsensical budget management by the Department of Transportation. This was augmented by a steady stream of cable news interview from distressed passengers, who clearly understood that the agency was hurting itself by hurting its own best customers. Many Americans figured out what was happening almost at once; the White House hoped to inflict pain on the American people and convince them that modest spending cuts were totally unacceptable.

Others in the media also saw the charade for what it was. A blistering report by Bloomberg found that the FAA was overstaffed in some airports and had ample ability to make smart budget decisions. This investigative article highlighted how the FAA could have prioritized spending in a way that would not affect services or passenger safety.

It took exactly four days for Democrats in the Senate and the President to blink and abandon the “there’s nothing we can do” rhetoric.

Ominously for the Left and encouragingly for those of us fighting to rein in government over spending; we won. In this first pitched engagement over the impact of sequester cuts, average Americans didn’t rail against the spending cuts, they railed against Obama’s lack of leadership and terrible budget management. Thankfully, most Americans are inherently skeptical of the federal government's spending. They know Washington, D.C. wastes money and practices cronyism by giving preferential treatment to friends and donors when doling out tax dollars. They know that spending can and must be cut if we are going to once again have economic prosperity.

Today, President Ronald's Reagan's words still hold true. When it comes to fixing our economic problems, "Government is not the solution. Government is the problem."