(Editor’s note: Colin Flaherty has done more reporting than any other journalist on what appears to be a nationwide trend of skyrocketing black-on-white crime, violence and abuse. WND features these reports to counterbalance the virtual blackout by the rest of the media due to their concerns that reporting such incidents would be inflammatory or even racist. WND considers it racist not to report racial abuse solely because of the skin color of the perpetrators or victims.) 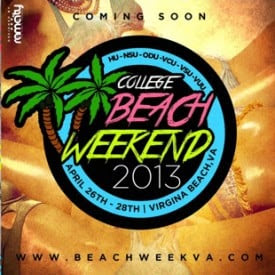 Reporters with all the local media had trouble describing what happened over the weekend when 40,000 black people descended on Virginia Beach for a party.

Their audiences, however, did not.

Daniel Johnson was one of dozens of people who had no trouble talking about the lawbreakers and the widespread chaos, danger, thefts, violence and lawlessness they brought to Virginia Beach as part of College Beach Week 2013; a time when black students could “blow off some steam” before final exams.

“Because it was a group of young black college people everyone is scared to say anything for fear of being called a racist,” he said in a post to a Virginian-Pilot news story. “It is what it is – these people come to the Beach and do everything in there [sic] power to intimidate the local and visiting White people at the Beach – rude – disrespectful – dirty and violent – They come here and treat our beach like a toilet On Saturday afternoon I went to the Harris Teeter and a LARGE group of young black visitors were in the parking lot drinking and playing loud music – intimidating locals – I called the police and even though 2 cop cars drove by nothing was done!”

Police reported 300 emergency calls to 911 Saturday night involving at least three shootings, three stabbings and three robberies. That they know of. All during a four-hour period. People in Virginia Beach are furious and are taking to Facebook and the local news sites to have their say.

Conscious of the paper’s history of deleting comments that refer to race, Mark Morrell backed up Daniel Johnson:

“PSA: There were no persons of any other race on the videos perpetrating those crimes. None. Not stealing the bikes, or starting the brawls, or any other illegal, crazy action. Have I mentioned any race at all? Nope!!! Because you know exactly what I’m talking about, I most certainly don’t have to. You can identify me all you want, I’m not scared, and I don’t hide behind my screen – or my newspaper.

There is an elephant in the room, Pilot. WHATCHAGONNADOOOOO ABOUT IT???”

Their invitations can be seen at http://beachweekva.com. Their tweets cam be followed at #beachweekend.

The family of Anas Harmache owns a restaurant in Virginia Beach. He posted a video on his Facebook page that captured some of black mob violence.

“These guys destroyed my family’s store, beat a kid senseless and put my dad’s life in danger,” said Harmache. “When I called the cops not one person showed up.”

The video showed dozens of black people fighting, taunting and harrassing people outside the restaurant.

Laurette LaLiberte, also on Facebook, said this kind of racial violence is becoming a regular feature of life in Virgina Beach: “My son was jumped a few months ago … 6 guys … right down the block from [this video]. … Robbed him and they kept kicking and beating him even after he was unconscious … he was in the hospital a week and had hemorrhaging on his brain … they haven’t caught those punks either.”

On Fox43 news, a black woman said fighting and lawlessness at Beach Week is nothing to worry about.

“I think it’s still fun,” said Kharizma Jackson. “It happens when you get a lot of people together this stuff happens everywhere you go. It’s like that.”

“It was just so crazy,” said business owner Billy Baldwin to the local ABC affiliate. “We actually had a fight break out in front of my business at Sandbar that the crowd busted in and broke my front window. So that’s a thousand dollars per window.”

The Virginia Beach racial violence is part of a pattern of more than 500 episodes of black mob violence documented in “White Girl Bleed a Lot: The return of racial violence and how the media ignore it.”

Kenneth Darden told the Virginian-Pilot that anyone who notices that all the lawbreakers were black is a racist.

“Being a black male, I am insulted reading your comments because they are very degrading and assumes that white kids are not capable of doing such things. Well let me tell you, all you have to do is come to Ocean View any day of the week and see for yourself how wrong you are!”


“I was scared to death,” said Denise Gordon, a manager for 18th Street Seafood Bar and Grill.

Though all those incidents happened late at night, Gordon said she’d noticed “rude, obnoxious” behavior around her restaurant much of the day. Fearful, she closed the restaurant at 8 p.m., two hours earlier than usual for a Saturday.

Gordon then said she called for security to help employees get to their cars after closing.

“It was so crazy, I don’t even know how to describe it,” she said.

The Virginian-Pilot is the same paper that achieved notoriety last spring when the editor refused to report that a black mob of 50 to 100 people assaulted two of his reporters after pelting their car with rocks in Norfolk.

A columnist revealed it two weeks later. Some reportedly said it was revenge for Travyon Martin.

The editor told a producer for Bill O’Reilly’s Fox News show that he had no evidence that a mob was involved or that the attack was racially motivated.
Posted by Diane Sori at 8:23 AM