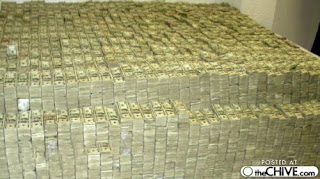 Bottom line...Obamacare is NOT about healthcare.  ObamaCare is about money and lots of it, in fact 1.7 TRILLION dollars, that’s TRILLION with a capital T, that’s going to be spent over the next decade!  Heaven help our children and grandchildren because they’re the ones that will be paying for it BIG time. As for balancing the budget...that goes right out the window too.

Even though the Supreme Court ruled ObamaCare constitutional as a TAX doesn’t mean that it still can’t be killed or repealed.  We all know by now about the reconciliation process, the hoped for ace in the hole for Republicans, but there is another way that most people seem to forget about and that is to defund it.   Since much of ObamaCare’s funding is ‘authorized to be appropriated’ meaning ObamaCare’s been authorized for monies but NO monies have actually been put in place for it yet. And that means that while ObamaCare is now a reality thanks to the SCOTUS, without dollars to fund it it simply can’t be implemented.  All sorts of cuts to different programs have been talked about and some even put down on ‘paper’ but those cuts have not actually been done yet.

Since both the House and Senate must pass appropriation bills (a legislative act proposed to authorize the expenditure of public funds for a specified purpose) in order for funding and spending to occur, to defund ObamaCare is simple...Congress just should NOT pass such appropriation bills that would funnel money into it.  Hence, ObamaCare would die for lack of a way to finance it.

And with Medicare’s main trust ready to go into the red in 12 years or less, Congress better start defunding the whole damn thing like right now, because Medicare can’t take any more cuts to help cover the cost of this monstrosity.  After all, Medicare is where Obama is trying to cut the most as he feels the elderly and infirm aren’t worth the cost of being kept alive!

The delay in implementation of ObamaCare,while everyone waited for the Supreme Court ruling, actually stalled the funding from being appropriated, which was indeed a good thing.

Adding to this is the fact that many state governors are saying they cannot afford to implement the expansion of the Medicaid provision that ObamaCare calls for.  And without that implementation much needed monies that would have gone into ObamaCare are now being denied.

Florida Governor Rick Scott, my governor, believes and rightly so that ObamaCare "hinders the ability of the free market to allow higher quality healthcare providers to prosper"  and has publicly stated that he will NOT implement ObamaCare because the law would kill jobs, jobs he has worked so hard to create, and cost Florida 1.9 billion dollars which he feels is just another tax on we Floridian that we cannot afford.

And some governors, including Rick Scott, are going even further by saying they refuse to set-up the required websites where people are supposed to be able to shop for insurance policies that would have funneled monies into ObamaCare.

Governor Scott, and the other governors refusing to implement ObamaCare, would prefer to give tax credits so people can shop for whatever health insurance they choose to or NOT shop for it all.  But here’s the kicker in our sue-happy society...Democrats have said that healthcare groups from around the country would be willing to file lawsuits if these governors don’t comply with ObamaCare.

Just what we need...more frivolous lawsuits to cost we taxpayers even more money that we don’t have.

The next week will be quite interesting as we wait for July 11th and the House promised start to the repeal of ObamaCare.  Let’s just hope that the House Republicans can pull this off, because if not that only leaves us November 6th as our last chance.  And while I have the utmost confidence that Mitt Romney WILL be our next president, I can just the damage Barack Hussein Obama will do to ‘We the People’ in the months before he leaves office just to pay us back for sending him and his precious ObamaCare packing.
Posted by Diane Sori at 12:11 AM