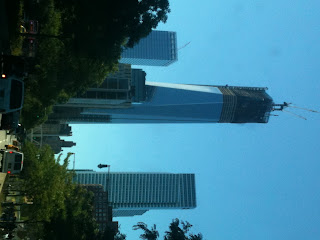 Yesterday, having just arrived in NYC on a personal matter, I made it a point to drive by Ground Zero to see once again the rise of the Freedom Tower.  Much progress toward completion of the tower had been made since last year's September 11th Ten Year Memorial Service.

Seeing the new tower rise majestically into the air brought back many memories...some good, some bad, some sad, and some of sheer anger and rage that remain with me to this day.

I remember the good...eating at Windows on the World and seeing the landscape of NYC spread out before me...going on a NYC vacation and taking my older son as a young child up to the Observation Deck and seeing his face light up as he marveled that he could touch the clouds.

I remember the bad...the morning of September 11, 2001 watching in horror as two jetliners slammed into the Twin Towers causing 3000 people to be buried under tons and tons of concrete and steel as those magnificent buildings came tumbling down...knowing that none survived, including two dear personal friends of mine.

I remember the sad...crying for days in shock NOT believing that people, any people, could be so vile, so evil as to do something like this to innocents.  What started as a beautiful fall day ended in death on an unknown scale right here in my beloved country...so much death, so much destruction...and I was sad, so sad, for what had the world become to breed such hatred and contempt for my country.

And then I remember the moment the anger and the rage set in...It happened in an instant, like a light bulb going off, for in that second that tears could no longer flow I realized that islam had declared war on my country...on my beloved America.  islam had changed America forever...islam had just for a moment brought America to its knees.

On September 11th a new breed of patriot and freedom fighter was born, and I am proud to be one of the many.  I will NOT forgive nor will I ever forget the day that all our lives became something very different than what we ever expected them to be.

And driving by the shiny gleaming tower I cursed islam yet again for what it had done to those lost, to the loved ones they left behind, and to my country...my country that is still reeling because of what barbarians did that fateful day in NYC, in Washington DC, and in a field in Pennsylvania.

Oh how I wanted those buildings to be rebuilt NOT as some modern design so different than before but rebuilt as they were...same design, same feeling, same towers reaching for the sky.  The only difference I wanted was for two more floors to be added...one a museum to honor those lost that fateful day and the other just to symbolize that America says, ‘screw you islam...you will NOT defeat us!’   I wanted all to be as it was before...before they came tumbling down...before we all cried.

And that’s what I wanted all these many years until today when someone said, NO, you don’t want them as before, because to build them as before is like it never happened. The buildings may be back but all the people would still be gone. They said the Twin Towers need to be at rest, to be at rest with all the people who died within them.  And they said the new tower, The Freedom Tower, would better serve to remind not only us, but also the ones who come after, that while people died that day, America survived.

Reality is the Twin Towers are gone; the Freedom Tower rises in their place but there is something comforting in that word freedom...for freedom means ‘We the People’ did survive; freedom means America survived; and freedom means we will carry on in the name of those lost for we will NEVER forget.


And freedom means in the name of God and all that's holy...God Bless America...always.
Posted by Diane Sori at 12:18 AM