Op-ed:
Standing on the edge of the fiscal cliff
By: Diane Sori 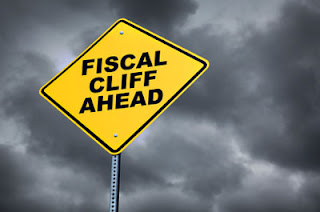 In between talk about Benghazi, ObamaCare, and voter fraud the words 'fiscal cliff' loom large.

Fiscal cliff...the monetary nightmare we'll face on December 31st when the terms of the Budget Control Act of 2011 are scheduled to go into effect.

Among those changes are the end of last year’s temporary payroll tax cuts, the end of certain tax breaks for businesses; the end of the tax cuts from 2001-2003; reductions in both defense and non-defense spending; major cuts to NASA; the expiration of the Bush Tax Cuts; the end of a payroll tax holiday and extended unemployment benefits; and the onset of reimbursement cuts to Medicare doctors. And let's NOT forget the beginning of the mother of all taxes related to the God-awful monstrosity known as ObamaCare.

Thanks Obama...you've screwed 'We the People' yet again.

And unless the White House and Congress come to a bipartisan deal to stop our economy from going over that cliff, on January 1st over we go to the tune of $7+ TRILLION worth of tax increases and spending cuts over this decade. And to add insult to injury, the debt ceiling will need to be raised by early next year leading to what experts are saying could be another recession.

Oh what a happy day this all is...NOT!

And to make this even worse is the fact that the Republicans just might have to agree to a marginal income tax increase to stop the fall off the cliff along with agreeing to concessions on both the revenue and entitlement ends even though Obama has said he will veto any fiscal cliff package that extends the Bush Tax Cuts for top earners, something the Republicans insist upon.

It's 'read my lips...NO new taxes' all over again.

And while both parties are at least paying lip-service to agreeing that the most important thing is to kick start the economy, the reality is that if we do go over the fiscal cliff it will not only affect our economy but would also likely result in a credit rating downgrade in 2013, and add to our debt burden as well.

But how did this nightmare all start you wonder..it's really very simple...the fiscal cliff was created when the command decision was executed to switch US currency from 'treasure' backed bills to federal reserve notes with no backing. Essentially, bills show the possession of 'treasure' (as in gold or silver), meaning something of value is backing it, notes are money owed, credit turning into debt over time, with NO tangible backing.

Basically, this is what's known as 'fiat money.' Fiat money distorts the real time value of money and destroys both the money and the economies that use it, our economy included. 'Real money' like gold and silver retains value over time, the greater its value and the longer it endures, the more likely it will be accepted as money thus strengthening any economy that uses it.

This is the 'establishment's' (the government's) dirty little secret that's hidden in plain sight.

This is why 'savers' are penalized in our credit based economy while spenders are heralded. Spenders put bills (treasure) back into the economy, savers take those bills (treasure) away.  And here's an interesting fact...in the 95 years since the creation by the Federal Reserve of credit based money, the US dollar has lost 95% of its purchasing power...that's 95% of 'treasure' lost.

So what will happen as the fiscal cliff looms near...no one can be certain but it's possible that all players will agree to postpone the fiscal cliff until March, giving themselves more time to work out a deal and to keep the economy from sliding into recession in January...and to pass the buck to the new Congress...agreeing to NOTHING and doing NOTHING...par for the course and something we know is the most likely scenario.
Posted by Diane Sori at 12:03 AM