Op-ed:
Obama and Clinton must now be held accountable 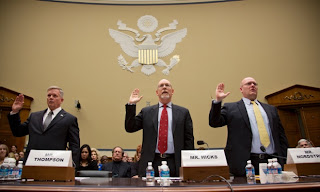 
Yesterday, a compelling case was made for further investigation into the events surrounding Benghazi, as this is only the beginning for Barack HUSSEIN Obama, Hillary Clinton, and all those who aided in the cover-up of the MURDERS of Ambassador Stevens, Information Officer Sean Smith, ex-Navy SEALS Tyrone Woods and Glen Doherty.

"These witnesses have information that has not previously come forward because the administration has tried to suppress it," said Frederick Hill, spokesman for the oversight committee. "The testimony of the former deputy chief of mission directly contradicts statements made by high-ranking officials." 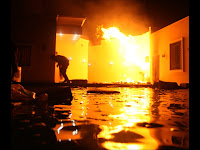 And the testimony given by the three whistleblowers, in my opinion, gives credence NOT only to Mr. Hill's statement but to this unholy group being LIARS, deceivers, and instigators in all that is Benghazi for they knew that what happened that fateful night was a terrorist attack...hell, they even might have outright planned it to cover for an Obama secretly sanctioned gun and weapons smuggling operation into Syria...a smuggling operation gone
horribly wrong after Ambassador Stevens found out about it.


But like I said, that is my opinion alone, yet on FOX News last night one of the commentators on Bret Baier's panel said the attack on the compound was "designed to draw people in."

And while the main stream media continues to downplay Benghazi while they flock to the circus known as Jodi Arias, Rep. Darrell Issa, chairman of the House Oversight and Government Reform Committee, conducted this oh so important hearing to get to the truth about what happened that night, because the families of the victims and 'We the People' deserve answers.

NOT only answers but to assure that those responsible are punished to the fullest intent of the law.

So, as I watched the testimony of these three brave whistleblowers I also saw what was paramount to trying to manipulate partisan politics into these hearings, for all the Democratic Congresspeople asking questions seemed NOT to care for the possibility that 'the anointed one' might very well be guilty of a cover-up or worse, but instead chose to accuse Republicans of using the witnesses for 'political purposes'. And this including 'supposedly' impartial Rep. Elijah Cummings, the top Democratic member on the oversight committee.

"Our top military commanders have already testified they did everything in their power, they did the best in their capacity," Cummings said, sort of the same words this administration keeps bloviating over and over ad-nauseum, proving Republicans were at that hearing to learn the truth about the night of September 11, 2012, from those who were there, while Democrats came to the hearing to deflect blame off Obama and Clinton and place it on those very Republicans daring to seek the truth.

Never mind that the whistleblowers gave powerful and highly emotional testimony regarding the events that night including describing the deaths of the four they called 'friends'...never mind that under oath Gregory Hicks, the number two diplomat in Libya at the time of the attack, said that he and many others knew the September 11th attack was terrorism from the get-go and was completely shocked when the Obama administration said otherwise...NEVER mind any of that...NEVER mind the truth...all that is important is to protect Obama and Hillary and shift blame to the Republicans who are just seeking the truth, and truth should have NO party affiliation.

"I was stunned." "My jaw dropped and I was embarrassed" said Mr. Hicks referring to Obama, Clinton, and UN Ambassador Rice's LIE that the attack was the result of spontaneous violence over a YouTube video critical of mohammad and islam.

Mr. Hicks, his voice cracking when talking about the death of his friend Ambassador Stevens, said that when he returned to Washington for Stevens' funeral how he had been "effectively demoted from deputy chief of mission to desk officer" simply because he had challenged Obama and crew's lie about a YouTube video being the cause of the attack.

"I am a career public servant," Hicks said. "Until the aftermath of Benghazi, I loved every day of my job."

Sad, so sad for this is NOT how America operates...or NEVER did until this miserable administration came into power and the word 'truth' was stricken from their vocabulary.

And when Eric Nordstrom, the former regional security officer in Libya said, "It matters to me personally and it matters to my colleagues at the Department of State...It matters to the American public for whom we serve, and most importantly it matters to the friends, the family" of those killed, he was clearly talking about the truth and that nothing less would be acceptable.

And some of the 'truth' we learned today made me cringe, especially when Mr. Hicks spoke of what hospital Ambassador Stevens was taken to while still alive. "The ambassador was in a hospital controlled by Ansar al-Sharia, the group whose twitter feed said it was leading the attack on the consulate," Hicks said.

MY stomach dropped for those words hit hard as I realized that if Ambassador Stevens was still alive after the actual attack I knew for sure he was NEVER going to leave that hospital alive...and he didn't.

And the 'stand downs'...the 'truth' about the stand downs is equally sickening as Mr. Hicks testified about asking Washington twice whether an F-16 or some other "fast-mover" aircraft could fly over the battlefield with hopes it would scatter the attackers.

"I talked with the defense attache, Lt. Col. Keith Phillips, and I asked him, 'Is there anything coming?'

Mr. Hicks testified that Lt. Col. Phillips said the nearest fighter planes were in Aviano, Italy, and it would take two to three hours to get them airborne, and that there were no tanker assets close enough to support them.

LIAR...for, according to Mr. Hicks, while there indeed might have been NO tankers close enough to send help in time there was a team of military Special Forces in Tripoli ready to go to help those in Benghazi but their commander, Lt. Col. Gibson, was ordered to stop them by his superiors.

"He got a phone call from SOCAFRICA (Special Operations Command Africa) which said, you can't go now, you don't have authority to go now," Hicks said. "They were told not to board the C-130 flight, so they missed it."

Hicks said Gibson told him: "I have never been so embarrassed in my life that a State Department officer has bigger balls than somebody in the military."

And while some are truly embarrassed I am truly angry...seething...furious that our military was told to 'stand down' because while SOCAFRICA might have given Lt. Col. Gibson the orders to 'stand down' someone higher up had to give orders to SOCAFRICA...and we can reasonably guess who that might be, because the attack happened just weeks before the election, and Obama's campaign rhetoric that he had al-Qaeda on the run would come back to bite him.

Along with, and most importantly, the 'truth' getting out of what I still believe to be a secret guns and weapons running operation funneled through Benghazi to Syria...an operation that cost four brave Americans their lives, because above all else 'the anointed one' and his sidekick Hillary, with presidential aspirations of her own, must be protected at all costs...innocent lives be damned.