A Judge Handcuffs The Cops 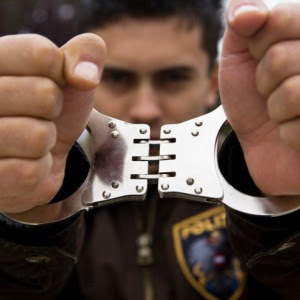 PHOTOS.COM
There can be no doubt that the stop-and-frisk actions of New York City’s police department have been hugely successful in lowering the crime rate there.

So, of course, they’ve been under attack by liberal do-gooders. Sadly, this past Monday, a Federal judge ruled that they violated the Constitutional rights of minorities. Is anyone surprised?

Stop and frisk has been an important weapon for police departments everywhere in their efforts to deter crime. Mayor Michael Bloomberg defended the program in New York City, saying:


The NYPD’s ability to stop and question suspects that officers have reason to believe have committed crimes, or are about to commit crimes, is the kind of policing that courts across the nation have found, for decades, to be constitutionally valid.

If this decision were to stand, it would turn those precedents on their head — and make our city, and in fact the whole country, a more dangerous place.

Thanks in large part to the stop-and-frisk program, Bloomberg says that New York is the safest big city in the United States. Unlike Chicago and other cities where crime rates are skyrocketing, New York is seeing record lows in many areas of violent crime.

So it follows, as night follows day, that the stop-and-frisk program was challenged in the courts. U.S. District Judge Shira Scheindlin ruled in a pair of decisions that the police department’s policy violated the Constitutional rights of minorities.

It just so happens that blacks and Hispanics make up about 60 percent of the population in the precinct under dispute in the case. But they made up 96 percent of the people the police stopped and questioned. This was enough to convince Scheindlin that the police department’s actions were racist and unConstitutional.

The judge ignored the fact that an overwhelming majority of crimes committed in the area are by minorities against minorities. In New York’s 88th Precinct, where the alleged discrimination took place, 99 percent of violent crimes (and 93 percent of all reported crimes) were committed by blacks and Hispanics.

Or as former New York Governor George Pataki put it, “You go where the crime is if you want to stop the crime.” And he added, “The effect of the policy is thousands of lives that are saved, largely low-income, minority lives, because we have much lower rates of violent crime.”

Heather Mac Donald of the Manhattan Institute pointed out the absurdity of the judge’s logic:

That would be as ridiculous as having airport screeners pick on grandmothers and young children, just to show they’re not “profiling.” Oh, wait; that happens all the time.

But, of course, liberals on a crusade — especially one that will hamstring and handcuff the police — will simply ignore any facts that get in their way.

To realize how absurd some of the arguments can be, consider the case involving David Floyd, the primary plaintiff in Floyd v. City of New York, the class-action lawsuit brought before Scheindlin.

Here’s how The Wall Street Journal described what happened with him:


[Floyd] was observed trying numerous keys and jostling a door in an area where a series of burglaries had recently been reported. Because burglary is often a violent crime, the judge thought the cops were justified in stopping and frisking the men’s’ outer garments but went too far in checking Mr. Floyd’s pockets. Therefore the judge ruled that his Fourth Amendment rights had been violated.

Can you believe what you just read? According to Scheindlin, the police were justified in searching Floyd’s jacket. But how dare they see what he had in his pants’ pocket!

Here’s how The Journal describes a second of Judge Scheindlin’s examples:


Then there’s Clive Lino, stopped and frisked in 2011 because he matched the description of a homicide suspect from a wanted poster distributed to officers that morning – right down to his red leather Pelle Pelle jacket.

Sounds like good police work, doesn’t it? Not good enough, the judge ruled: “Here again the judge saw a reasonable stop and even a reasonable frisk, but a frisk that went too far and created another alleged Fourth Amendment violation.”

In her ruling, Scheindlin said that the New York Police Department conducted 4.4 million stops from January 2004 through June 2012. Yet the class-action lawsuit brought before her cited only 19 cases.

You would think that if you could cherry-pick just 19 examples out of a total of 4.4 million cases, all of them would be horrifying examples of police misconduct.

That left only nine cases — fewer than half — wherein she concluded that both the stops and the frisks were not based on reasonable suspicion and thus were unConstitutional.

Scheindlin ordered that new procedures be enacted by the police to end the discrimination and that a Federal monitor be appointed to make sure her instructions are carried out.

Bloomberg promptly announced that the City will appeal Scheindlin’s decision. Hopefully, the U.S. Court of Appeals — and, if necessary, the U.S. Supreme Court — will overturn her ruling.

What if that doesn’t happen? The Wall Street Journal put it this way:


The tragedy is that if the judge’s ruling isn’t overturned, the victims won’t be in the tony precincts of liberal New York. They will be in the barrios and housing projects where stop-and-frisk has helped to protect the most vulnerable citizens, who are usually minorities.

Once again, liberal policies hurt the most the very people they claim to want to help. So what else is new?

Until next time, keep some powder dry.
Posted by Diane Sori at 9:53 AM