America lost amongst a dream NOT remembered
By: Diane Sori

Or else what...useless sanctions will be slapped on them...General Sisi must be laughing his head off as much as Vladimir Putin is laughing his.

Obama and Kerry oh so conveniently forget...or better yet choose to ignore...that Egypt is an independent and sovereign country ruled by the Egyptian constitution and by the power of an 'independent judiciary authority of law' and are NOT ruled by Obama. Therefore, they do NOT have to abide by Obama's or Kerry's wants or demands regarding their internal affairs, especially after Obama actually had the nerve to condemned Egypt for even bringing terrorists, thugs, and criminals to justice.

But hey...the man who professes to be a Christian could NOT care less about his supposed 'fellow' Christians being slaughtered in Egypt while he works to protect his Muslim Brotherhood brethren at all costs...good little muslim that he really is...after all he welcomed them into our government fold with open arms. And he knows allah might start rumbling if he didn't protect and stand behind the brethren every time they are brought to justice anywhere in the world.

So as Egypt is now joining other nations in laughing at Obama's diplomatic failures, Vladimir Putin continues to move his chess pieces into position to checkmate Obama on all fronts. And with Putin making NO secret that next in his scope will be Kharkiv, Donetsk, and the rest of southeastern Ukraine, Obama still continues on with his diplomatic kumbaya nonsense as Putin works to rebuild an empire.

And in the process of empire building Putin is NOT only making a mockery of the U.S., but he has actually negated America’s superpower status to almost nil. Making our great country a bit player on the world's stage, Putin has caused our allies in Japan and South Korea to wonder what will happen to them as both Russia and China flex their muscle. And those in the Middle East...especially in Israel... see our country under Obama's watch as playing games with Iran...as selling them out in regards to Iran moving forward with their nuclear ambitions. 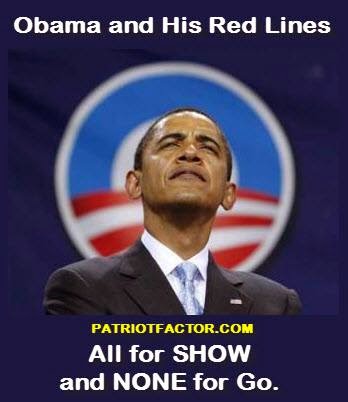 And as Obama continues to draw 'red lines' in the sand in regards to our enemies, once crossed his retort is NOT military action...as it should be...but economic sanctions that just mean our enemies will pull out their credit cards and charge whatever they need as those in Europe will allow this out of fear of going up against the suppliers of their much needed gas and oil.

Oh what a NOT so happy web Barack HUSSEIN Obama has weaved.

And with Vladimir Putin now amassing over 80,000 troops along Ukraine's southeastern border what does Obama do...he again bloviates in his best 'leading from behind' nails on a blackboard voice that Russia needs “to move back those troops and to begin negotiations directly with the Ukrainian government, as well as the international community.” 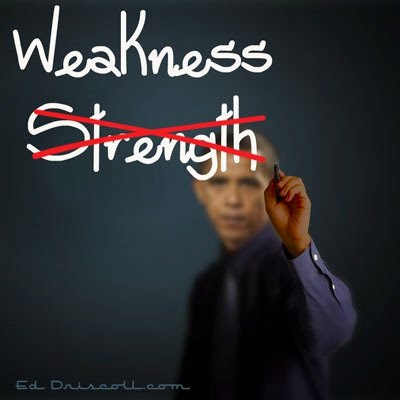 Dealing from a position of appeasement, weakness, and total dysfunction regarding foreign policy and NOT from a much needed position of strength...of military strength...when you think about... really think it through...it makes you realize that Barack HUSSEIN Obama has actually already surrendered the Middle East to Iran, and now by his lack of actual action has surrendered Ukraine to Russia in addition to dictating to the sovereign nation of Egypt how they are to punish his terrorist and thug buddies. And within that realm of the new reality of Obama's social engineering, the man who would be King has been made into a court jester by the bully Putin, by the crazed Iranian regime as he does a diplomatic dance with Tehran, and by a general out to restore order, sanity, and freedom to his country...a country set ablaze by the very man who thinks his words and wants trump all.

And all this, as Charles Krauthammer said, "...could cost America dearly" for while nation building is NOT our prime objective, nation saving must always be for if we lose 'face' within the world community our enemies will have easy pickings of those wanting freedom...of those whose very freedom is now but a dream NOT remembered.

And Barack HUSSEIN Obama in five short years has built it, owns it, and now must pay dearly for it with our beloved America the very thing that has been lost in the process...and that my friends is the saddest thing of all.
Posted by Diane Sori at 12:04 AM