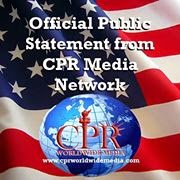 I'm Michael Collins-Windsor, aka The Stallion, and I'm the CEO of CPR Worldwide Media and I'm here to tell you that our CPR family of talk show hosts and DJs support the OAS movement currently ongoing at our nation's capital.

Our beloved America is becoming unrecognizable to us as the 'enemy within' turns our great republic into a model of European socialism heading on its way to becoming yet another communist state...or worse...for if Barack HUSSEIN Obama has his way America will become an islamic caliphate within a matter of a few short years.

And as we Americans of every race, color, and creed face injustice, intolerance, political correctness, and a trampling of our Constitutionally given rights on a daily basis by the man who wields a phone and a pen to take away those rights, some brave American warriors have gathered together in our nation's capital to lay the groundwork for what might just turn into the long awaited Second American Revolution.

More than 230 years ago, great patriots like those in attendance at OAS, and those there in spirit with them, fought against a tyrannical king hell bent on subjugating the people to his will and he failed. Today, those at OAS are doing the same but the king has become a president so overstepping his bounds of power that silence or even the ballot box can NO long be the answer or the solution. We must follow the lead of those protesters and join hands across the nation and NOT only support those protesting today but we must gather together and start to protest all across this great nation for numbers is the most powerful weapon of all.

And only through numbers will we take our country back from those out to destroy her.

So to those in Washington, we here at CPR stand behind you, support you, and pray for your mission...and know that what you are doing today is just the beginning NOT the end.