The End of an Era
By: Diane Sori
As I sat in front of my TV this morning watching the shuttle Discovery being carried to its forever home at the Smithsonian, I could not help but to remember all those amazing journeys into space and the brave astronauts who risked their lives to take them.  I could not help but to remember all the scientific discoveries made, and all the hopes and dreams for America’s bright future in space...everything that was one small part of our American exceptionalism. 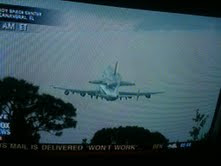 As I watched the Challenger being carried to its final home I cursed Obama for taking a part of our exceptionalism away, for basically taking our space program away, and for leaving America’s future in space a question mark and nothing more.
While I know that some unmanned missions will still go forward, the thrill of human exploration, the inner quest inherent in man’s need to explore the unknown, has indeed been taken away, at least for now, by this man so he can funnel those cut funds to those whose votes he is trying to buy.
Mr. Obama, by doing what you did you also dishonored the words of presidents who came before; presidents like John F. Kennedy, who in 1961, set a goal of reaching the moon by the end of that decade.  That mission was accomplished.  You dishonored President Bush who set a goal of going back to the moon by this decade's end.  You took the monies needed to attain that goal away just so you could garner more votes for yourself come November.
By doing what you did, Mr. Obama, you ruefully and deliberately halted certain aspects of scientific progress critical to the American people, for great advances were made by NASA during the years of space exploration that you thankfully had no part in it.
Mr. Obama, if we did not go to the moon 40 years ago the medical field would not have ultrasound scanners, MRI's, digital breast imaging, laser angioplasty, programmable pacemakers, voice-activated wheel chairs, and the list goes on.  From these advances alone, millions of lives have been saved.
Mr. Obama, without NASA computer technology would still be in its infancy because it was the space program that gave us microcomputers, data-based management systems, expert system software, structural analysis, virtual reality, laser surveying, and again, the list goes on.
Mr. Obama, without NASA, the Regenerable Biocide Delivery Unit, a municipal water treatment system critical for developing nations, would never exist.  Microspheres, telemetry systems, radiation insulation, earthquake warning systems, wireless communications, compact discs - the list of applications derived from our space program is endless, and now you have taken future possibilities and discoveries away, again just to garner votes for your arrogant, narcissistic self.
Since you got your way, Mr. Obama, NASA is now expected to use its greatly reduced budget to encourage private companies to build, launch and operate their own spacecraft for NASA's benefit, basically privatizing outer space.  Because of you, Mr. Obama, NASA will now have to pay those private companies to carry U.S. astronauts into space or worse yet, will have to continue to pay the Russians exorbitant amounts of money to carry our astronauts into space.
And Mr. Obama, you have not even considered the ramifications of what privatizing space exploration means. For example, who would own the rights to scientific discoveries, and any future applications, occurring from these missions?  Would it be NASA itself, or would it be the private companies paid by NASA to build and operate the spacecraft?  And what about safety issues?  Would private companies, whose bottom line is profits, be as concerned about the safety issues of going into space if those issues cut into their profit margins?  I think not but then again Mr. Obama, you could care less about that.
And Mr. Obama, as you continue to lie about how your policies have created jobs and cut the unemployment rate, your cutting funds for programs that were supposed to return us to the moon put thousands of more people out of work, not only along Florida's Space Coast, but in space-related industries in California, Texas, Alabama and Arizona as well.
Mr. Obama, you never took any of this into consideration for all you cared about was funneling NASA’s funds into your vote buying operation.
Mr. Obama, thanks to you, the loss in scientific knowledge, jobs, and our lead in space exploration might never be recouped.  And thanks to you, the old adage of ‘he who controls space will control the world,’ will now go to either China or Russia for they are smart enough NOT to cut their space programs no matter how poorly their economies might be doing.
Hopefully come November, instead of cutting more from NASA’s funding, Mr. Obama, ‘We the People’ can cut you right out of a job, and then return this one small part of American exceptionalism...our future in space...back to her!
Posted by Diane Sori at 12:56 PM