Flow of U.S. taxpayer dollars to land of his father surging 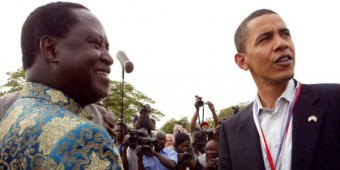 As Americans tightened their belts to pay federal taxes on time, the Obama administration is exploring what appears to be every way possible to use U.S. taxpayer dollars to stimulate the economy – in Kenya.

According to U.S. Trade & Aid Monitor, the White House has increased the flow of U.S. taxpayer dollars to Kenya, the land of his father’s birth.

“Kenyan businesses lately are increasingly becoming recipients of U.S. government largesse, as the Obama Administration, among pursuing other endeavors aims to expand ‘livestock-related economic opportunities’ in that nation,” the watchdog newsletter wrote April 14.

Amid the “spike of activity” in Kenya is a U.S. government contract committing to a five-year effort to “improve the inclusiveness and competitiveness” of the livestock industry in Marsabit and Garissa counties in Kenya.

On April 12, U.S. Agency for International Development, USAID, published a pre-solicitation for the Resilience and Economic Growth in the Arid Lands-Accelerated Growth program, or REGAL-AG, under the U.S. government’s Feed the Future initiative.

“REAL-AG is intended to be a five-year activity which deepens USAID investment in Marsabit and Garissa, Kenya,” the program pre-solicitation read. “The procurement will improve the inclusiveness and competitiveness of the livestock value chain in these two counties, while furthering diverse livestock-related economic opportunities.”

While the pre-solicitation neglected to say how much money would be awarded in the REAL-AG program, the contracting office was listed as the USAID office in Nairobi, Kenya.

On April 12, USAID also listed a separate pre-solicitation for the Kenya Agricultural Value Chain Enterprises program, or KAVES, also with the contracting office listed as the USAID office in Nariobi.

Again, the pre-solicitation neglected to give program specifics or to say how much money would be awarded in the KAVES program in Kenya.

The website of Carana Corporation, a USAID consultant and contractor based in Arlington, Va., notes that the KAVES project “will focus on increasing agricultural productivity within staples, dairy and horticulture value chains.”

The Carana website further suggested Kenyan nationals would be hired to manage the program as “Value Chain advisors” to work with micro-finance institutions and banks to provide financing to “farmers, farmer groups, agro-enterprises and a wide range of local and regional partners to enhance the quality, availability and utilization financial services oriented toward agriculture.”

The USAID “Fact Sheet” for Kenyan foreign assistance appropriations indicates that the total for Fiscal Year 2011 has increased to $714 million from the Fiscal Year 2008 total under President George W. Bush of $684 million.

The U.S. Trade Monitor listed the following additional foreign aid program support for Kenya:
The USAID Kenya country page features a photograph of a mother who used a USAID-sponsored microfinance loan to buy a dairy cow, noting, “Proceeds from the milk sales are helping pay her children’s school fees.”

‘Yes Youth Can!’
Through a $45 million “Yes Youth Can!” program, which mimics Obama’s 2008 “Yes, We Can!” presidential campaign slogan, Kenyan out-of-school youth “are empowered to develop livelihood opportunities and improve their capacity for a greater voice in national and local affairs.”

Among the economic development projects funded by U.S. taxpayer dollars and featured on the USAID/Kenya webpages are the following:
The U.S. Trade Monitor noted that other notable U.S.-funded Kenyan projects in 2012 include the launching of a National Institutes of Health-led initiative to hire contractors to conduct genetic research of Kenyans with Type-2 diabetes.

Separately, the U.S. Trade Monitor pointed out, the U.S. Army embarked upon a survey of potential vendors to provide helicopter flight-training simulators to the Kenyan government.

WND previously reported the Obama administration secretly spent $23 million of U.S. taxpayer dollars in 2010 to fund a “Yes” vote on a constitutional referendum that ultimately passed, along with provisions that increased access to abortions in Kenya and established legal status for Islamic law tribunals.
Posted by Diane Sori at 9:46 PM